One of the most wonderfully ridiculous things I’ve ever seen in my life! 😀

With that said, and after seeing ‘Doomed: The Untold Story of Roger Corman’s The Fantastic Four’ documentary on Amazon Prime*, I can’t help have a soft spot for this film. This is especially after learning about the behind-the-scenes dramas that went into the making of this troubled production.

I love the 2005 and 2007 ‘Fantastic Four’ movies and whist I admit they have their problems, everyone can agree they’re far better than the 2015 film. But it’s so easy to forget that there was a ‘Fantastic Four’ film originally made in the 1990s, albeit unreleased, and Marvel wants us to forget it.

A film producer named Roger Corman, who made low-budget films, financed the making of a film adaptation of the Fantastic Four, based on the 1960s comics by Stan Lee and Jack Kirby. Until then, Marvel superhero movies were not at their height. Superman and Batman films were in their prime.

And despite the 1990 ‘Captain America’ film being made, Marvel superheroes in movies hadn’t made their mark. Roger Corman and a team of passionate filmmakers decided to make a ‘Fantastic Four’ movie in the hope of it becoming a big blockbuster. Unfortunately, Marvel put a stop to that. 😦

I would’ve thought Marvel would give some support to Roger Corman and Constantin Films to make this ‘Fantastic Film’ film possible. Whether Marvel claimed Roger Corman and his lot were stealing the rights to make ‘The Fantastic Four’ film, I’m not sure. Like I said, the production was so troubled.

Having watched ‘The Fantastic Four’ film on YouTube though, maybe it was for the best that this film never got released at cinemas. Whilst there are things that I like about the film and it pays certain homage to the original 1960s comics, there’s no denial there are problems with the film’s output. 😀

Does that mean this film should be dismissed? Not at all! I’m glad there is a way to watch ‘The Fantastic Four’ 1994 film, whether it’d be on an unofficial DVD or YouTube. I also like to think there could’ve been ways to make the movie better had it gone in a certain direction to make it appealing.

In a sense, ‘The Fantastic Four’ 1994 film does feel like a classic superhero movie from the 1960s. Maybe that’s what the problem is. The film could be better if it married both classic and contemporary standards in terms of superheroes. There are things regarding the film that are dated.

The four go into outer space before they get hit by cosmic rays and they become superheroes. They also thwart the villainous efforts of Doctor Doom, formerly Victor Von Doom, who is king of Latveria and wants the glory of the Colossus comet. Doom does that by stealing the Fantastic Four’s powers.

So yeah! You have the makings of a very classic ‘Fantastic Four’ superhero movie. That I applaud and it’s nice the production team put so much effort into making this a faithful comic book film adaptation. But like I said before, there’s no denying that are issues with the execution of this movie.

Alex Hyde-White stars as Reed Richards/Mr. Fantastic. Now, I like Alex Hyde-White’s performance as Reed. He’s clearly invested himself as the character of a scientist who’s interested in an experiment involving a comet before he becomes the leader of a superhero team and looks out for his members.

But there’s not much in terms of a character journey going on for Reed. With the 2005 film, there was that since Reed had to learn to express emotions more rather than being clever. Here, Reed doesn’t change much as a character, despite being smart. And I hate to say this, it makes him bland.

Mind you, I liked it when Reed questioned how he and the rest of the Fantastic Four survived the explosion in space when they got hit by cosmic rays. At least it wasn’t me who questioned the four survived an impossible explosion. But despite that, there’s not much that’s memorable about Reed.

Rebecca Staab as Sue Storm/Invisible Woman has a similar problem. While I like Rebecca Staab and she’s clearly a very pretty woman, she’s rather stuck being infatuated with Reed. And yeah, I like that Reed and Sue love each other in an instant, making a difference to how the other films do them.

But…why would you start off Sue and Johnny Storm knowing Reed as kids instead of grown-ups in the film? Yeah before the 10 year period, Sue and Johnny are kids at the beginning. Wouldn’t it be sensible to have Reed and Sue know each other as adults instead of loving each other 10 years later?

It was strange to see Reed and Sue acting out as a couple together when they’ve barely known each other in the 10 years that have passed and by the end, they get married. I joked before I even saw the scene that Sue had her own reasons for joining Reed to defeat Dr. Doom because she loved him.

I WAS KIDDING!!! Anyway, Jay Underwood as Johnny Storm/the Human Torch has similar problems to Reed and Sue in terms of character development. While I enjoyed Jay Underwood (having seen him in ‘The Boy Who Could Fly’ – Hey! He flew in that and this film), Johnny’s character isn’t so great.

For one thing, he tended to moan a lot, though not to the same extent as Robin in ‘Batman & Robin’. Secondly, there’s not much of the cocky attitude that I saw in Johnny Storm in this film as opposed to the 2005/2007 films. He also seems pretty willing to accompany the group going into outer space.

Which makes me wonder, shouldn’t there have been resistance from Sue and Johnny about joining Reed and Ben going up into space? They must’ve had other things to do with their time to give up going into outer space. Johnny also doesn’t do much ‘flaming on’ until the end to stop a laser beam.

Wouldn’t it have made sense to cast Michael Bailey Smith as both Ben Grimm and the Thing? I mean, they are the same character! The reason why Bill Bixby was cast to play Bruce David Banner and Lou Feringo was cast to play the Hulk was because they couldn’t do a CG Hulk character in 1978.

Joseph Culp stars as Victor Von Doom/Doctor Doom in the film. Like with the Fantastic Four, Dr. Doom isn’t that well-developed in character. For a start, he becomes a victim of a terrible experiment with Reed. 10 years later, he becomes a masked villain with little motivation about why.

I mean, okay, he’s doing it because he wants to absorb the Fantastic Four’s powers because of the Colossus comet. But did he do this because he wanted revenge on Reed? I’m not sure to be honest with you as it’s not properly explained. Mind you, Doom wearing the mask didn’t help matters here.

I thought it was just me but even my parents couldn’t hear what Doom was saying when he was talking through the mask. He sounded muffled in certain scenes. Even Joseph Culp raised this point in the ‘Doomed’ documentary. They should’ve properly re-dubbed Doom’s lines to make him audible. 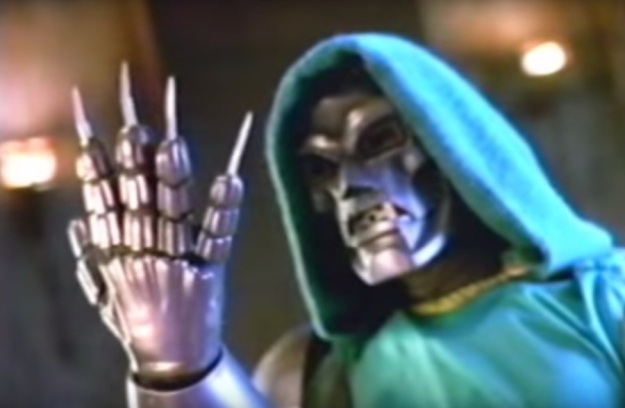 Kat Green stars as Alicia Masters, whom Ben Grimm falls in love with. Kat Green seems to be a lovely actress. But like Sue Storm, Alicia suffers similar problems with being instantly in love with Ben upon first meeting. Even her declaration of love causes the Thing to turn back to Ben Grimm. Wait, what?!

The film also features another villain in the form of Ian Trigger as the Jeweler. I found the Jeweler pointless as a villain here. Wouldn’t it have made more sense to make him the Puppet Master – Alicia’s father? Or maybe like the Mole Man, the crew couldn’t get the licence to do Puppet Master.

There’s also George Gaynes who only has one scene as an over-the-top professor. 😀 And there’s Annie Gagen as May Storm, Sue and Johnny’s mother, who calls the team ‘the Fantastic Four’ before they go up into outer space. Corny, but superb to have them called that and not at all in the 2015 film!

I wish Stan Lee, the original creator of the Fantastic Four, made a guest cameo in this film to give it more support than it should’ve had. I’m surprised he didn’t support this film as he did for the 2005/2007 films. Didn’t this 1994 film please him in being a faithful film adaptation of his creations?

The director of this ‘Fantastic Four’ film is Oley Sassone. I could tell from the ‘Doomed’ making-of documentary that he was enthusiastic about the project as much as everyone else. I wish he’d been given a bigger budget to make a film that had impressive action scenes and improved special effects.

There are times when I found myself laughing out loud at some of the ridiculously absurd moments in the film. This included Sue Storm vanishing to allow two thugs to bump into each other; Johnny’s reaction to “Flame on!” for the first time and the Thing sitting down and crushing a chair. I smiled. 😀 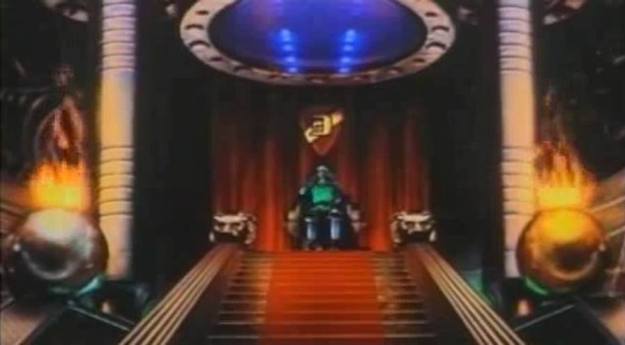 Like I said, the action scenes aren’t that great and the special effects haven’t dated well. This is a shame, especially with the low budget given to make this film. The moment where we’re supposed to be in awe of the Fantastic Four’s ‘fantastic’ powers are underwhelming even in a low-quality film.

The set design is impressive, especially for the sets for the Baxter Building interior and for Doom’s castle. At least Doom gets given a castle and is made king of his own kingdom compared to what the other movie versions of the Fantastic Four did. I do wish we spent more time in that Baxter Building.

So, do I think ‘The Fantastic Four’ 1994 unreleased film is great? No! I wouldn’t be that generous! But the 1994 film is way better than the 2015 film. And whilst I don’t think it’s as good as the 2005/2007 films, at least the movie embraces the spirit of the original comics which is what I expect.

It’s a shame ‘The Fantastic Four’ 1994 film didn’t get the cinematic release it was hoping for. But at the same time, I don’t think the film would’ve aged well if they went all the way with the dated approach of doing a comic book superhero film adaptation that doesn’t reflect contemporary values.

Had more time been done on the script in developing the characters further; had the film been given a better budget to create impressive action scenes and visual effects and had the film been longer than 90 minutes, it would’ve been impressive. So whilst it’s not fantastic, it’s a decent movie to see.

*Thanks to johnhurtdoctor on the Divergent Universe forum for letting me know about the documentary.