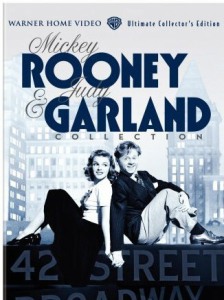 The Big Musical With Broadway Flair and a Western Air

If ‘Strike Up The Band’ is my favourite film out of the ‘Mickey Rooney and Judy Garland Collection’, then ‘Girl Crazy’ will have to be my second favourite. This film kept my interest all the way through.

The film sees Mickey Rooney as Danny Churchill, a young boy who has an eye for the ladies. He’s sent by his dad to a cowboy school in the Wild West to get away from the whims and fancies of life.

But Danny soon meets Judy Garland as Ginger Gray, the local postal mistress next to Cody College. Ginger is disinterested in Danny at first, but he’s determined to charm away and fall in love with her. 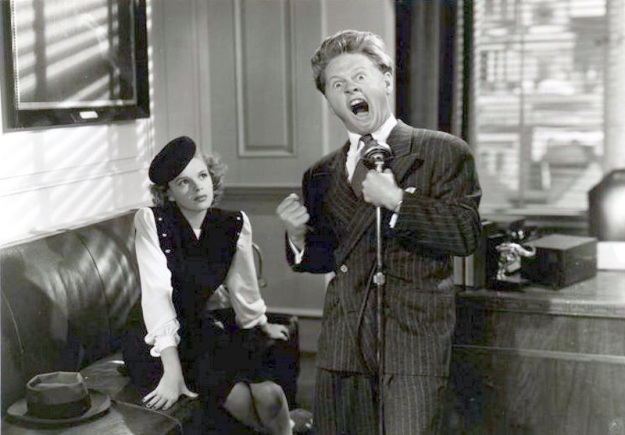 This movie was interesting in that Mickey and Judy play characters that don’t initially fall in love with each other. Ginger is antagonistic towards Danny, whilst he’s doing everything to make her like him.

Mickey Rooney is superb in his leading role as Danny. He balances both the comedy and drama in his male role. Danny’s interesting in that he has an eye for the ladies and his father disapproves of this.

Danny finds it a struggle to fit in with the company at Cody College and become a cowboy. It’s not surprising when he’s being ridiculed by the people there and he sometimes gives up with staying on.

Judy Garland is equally superb as Ginger, the leading lady. Ginger’s attitude towards Danny is peculiar, as she doesn’t know him well but has this instant dislike to him. She prefers cowboys more.

But gradually in the movie, Ginger warms to Danny and the two become fond of each other. The romance between Danny and Ginger gradually develops. Sometimes it’s rocky, but it also blossoms.

This movie also features an early film appearance of June Allyson as a speciality singer at the beginning of the film. June would later star in ‘The Glenn Miller Story’ 1954 film with James Stewart.

There’s also Nancy Walker as Polly Williams, Ginger’s best friend. Nancy is a famous actress and comedienne. I also saw her in an episode of Season 2 of ‘The Muppet Show’. She’s so funny in this!

There’s also Guy Kibbee as Dean Phineas Armour, Ginger’s grandfather. Guy Kibbee has worked with Mickey and Judy before in ‘Babes in Arms’ and he starred in the 1934 film ‘Dames’ with Dick Powell.

The biggest guest star in this movie is Tommy Dorsey and his Orchestra. Tommy Dorsey is like another Glenn Miller. I did enjoy seeing him and his orchestra perform music with Mickey and Judy.

The musical numbers featured in this film are as follows. There’s ‘Treat Me Rough’ sung by June Allyson; ‘Bidin’ My Time’ by Judy Garland and there’s ‘Could You Use Me’ sung by Mickey and Judy.

For me, there’s a weird musical number with Judy Garland called ‘Embraceable You’. This is featured during Ginger Gray’s birthday party, where it’s all the cowboys that attend and not the girls. What?! 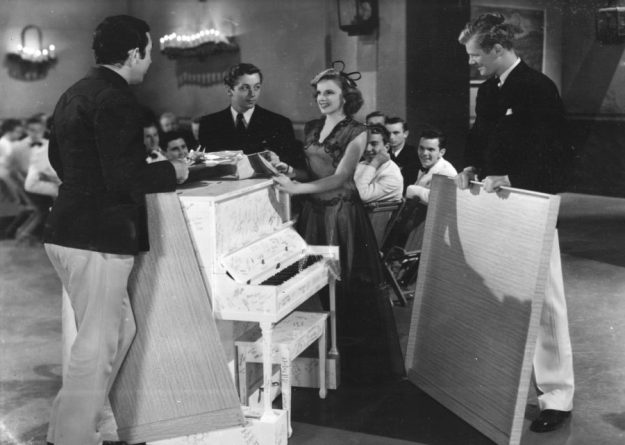 There’s also a musical number performed by Tommy Dorsey and his Orchestra with Mickey Rooney playing on the piano. This is the number ‘Fascinating Rhythm’ and Mickey does play so well on piano.

The film concludes with a wonderful musical finale performed by Judy Garland and Mickey Rooney with Tommy Dorsey and his Orchestra. It’s ‘I Got Rhythm’ directed by Busby Berkeley and it has lots of cowboys and cowgirls.

‘Girl Crazy’ is a pretty fast-paced musical film and one that I enjoyed watching with Mickey Rooney and Judy Garland in it. They deliver great performances through their songs and also comedy drama.

The DVD special features are as follows. As well as an all-new introduction by Mickey Rooney, there’s also a commentary by historian John Fricke. There’s also a vintage short called ‘Hollywood Daredevils’; a classic cartoon called ‘The Early Bird Dood It’; a stereo remix version of ‘I Got Rhythm’ and a theatrical trailer of ‘Girl Crazy’. There’s also an audio bonus which is a ‘Bronco Busters’ outtake.

On the ‘Mickey Rooney & Judy Garland’ Bonus DVD, there are a private screenings with Mickey Rooney, hosted by TCM’s Robert Osborne. There’s also ‘The Judy Garland Songbook’ and a ‘Mickey and Judy Trailer Gallery’ of their films.