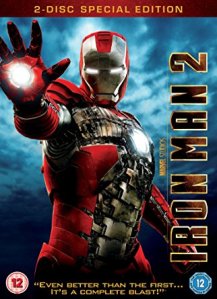 Iron Man and the War Machine

I never saw ‘Iron Man 2’ at the cinema when it was released in 2010. Not at all! I don’t know why I wasn’t persuaded to see this movie on the big screen. I suppose I was preoccupied with seeing Sarah Sutton at ‘Doctor Who’ conventions and finishing my three year degree at Cardiff University in 2010. 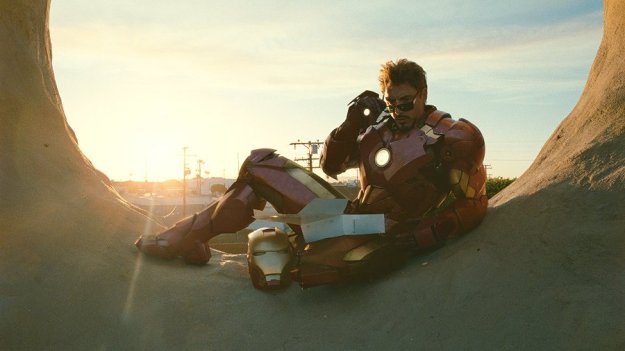 Well…I prefer the first ‘Iron Man’ movie compared to this one. Don’t get me wrong. I enjoyed this second movie. But at the same time, I felt there was something about this movie that made it so complicated and unfulfilling. It was tying a lot of plot threads connecting to other superhero movies.

I suppose there was a lot of expectations on my part that I felt weren’t met as a continuation from the first movie. For example, at the end of the first ‘Iron Man’ movie, Tony Stark declares to the public that he is Iron Man. Does that carry forward into the second film? Yes, on some level I believe.

The film sees Tony Stark embracing the celebrity status of him being a superhero which he clearly enjoys. It also sees him enhancing his business approaches at Stark Industries especially during those first scenes of him at the Stark Expo event. There were some Iron Man cheerleaders at that event. 😀

The United States government also wants to have Iron Man’s suit to use as a weapon to defend their country. Tony Stark however refuses to let them have his Iron Man suit, as he believes any technology of his will fall into the wrong hands. He has competitors that try to match his technology.

Tony Stark also seems to be a jerk in this movie. I mean, okay he was a jerk in the first movie. But even in that, he was changed from the experience he had being imprisoned in war-torn Afghanistan and wanting to be a superhero. Shouldn’t that progress forward to a new level to make him better?

How can I explain this? Here’s an example. In the movie, Tony finds that he’s dying due to the fact the palladium core in the arc reactor that’s keeping him alive is poisoning him. Now, you would expect him to get medical treatment? You expect him to seek his friends’ moral support here, right?

Well, that’s not what happens. Instead, due to Tony’s selfishness and irresponsibility, he makes a night of it at his birthday party, wearing his Iron Man suit and showing off to his guests. This results in him having a fight with best friend ‘Rhodey’ Rhodes, also in an Iron Man suit, during that evening.

Um, is this really the role model kids want to emulate? The reason why I like Spider-Man so much is because I can relate to him and feel that he’s an awful lot like me. Tony Stark as Iron Man doesn’t make me want to be like him. I don’t know if that is down to Robert Downey Jr.’s performance here.

It probably is. Speaking of which, Robert Downey Jr. does deliver a great performance as Tony Stark/Iron Man in the movie. Despite his character’s jerkiness, Downey Jr. does shine by balancing the humour and drama in his role as he did in the first film. It makes him a pretty complex character.

Tony Stark does get to experience some of the consequences of his actions in being a superhero celebrity. It affects his relationships with his friends and also puts him at risk when he has to tackle deadly opponents. He comes across as very smart. He also discovers some more of his family history.

Gwyneth Paltrow returns as Pepper Potts, Tony Stark’s love interest in the movie. Tony appoints Pepper to become the new CEO of Stark Industries. Now I don’t know if it’s me, but I got a sense that Pepper and Tony argued a lot in the film. Seriously, every scene that they have together they argue.

I don’t know if this is what love is where you have two people arguing with each other all the time? I mean, clearly they love each other but there’s got to be room for tenderness between these two. They do have one romantic moment when they’re kissing each other at the end of the film, but still.

Lt. Colonel ‘Rhodey’ Rhodes returns in the film, now played by Don Cheadle. It’s a shame Terrence Howard didn’t reprise his role as ‘Rhodey’ Rhodes for this movie. He didn’t return due to the fact he would get a pay cut for the second film. Clearly ‘Rhodey’ had plastic surgery and the voice change. 😀

That’s not to say Don Cheadle is bad playing the role of ‘Rhodey’. On the contrary, he’s very good. Speaking of which; ‘Rhodey’ gets to become Iron Man’s new ally in the film as he becomes War Machine. I’d hoped that ‘Rhodey’ would get to be War Machine for the ‘Iron Man’ movies someday.

Scarlett Johansson stars as Natasha Romanoff a.k.a. the Black Widow in the movie. Natasha is an undercover spy working for S.H.I.E.L.D. She goes under the guise of Natalie Rushman when working for Tony Stark as his new secretary in place of Pepper Potts. She is also a ‘kick ass’ fighter in the film.

I like how Natasha gets introduced in ‘Iron Man 2’ as well as for the rest of the ‘Marvel Cinematic Universe’ movie series. She seems pleasant, although she has faced a lot of death in her spy career. I liked the moment when Natasha reveals her true identity to Tony Stark/Iron Man later on in the film.

Mickey Rourke stars as Ivan Vanko, the movie’s big villain. I’ve seen Mickey Rourke before as he played the villain in the Alex Rider film, ‘Stormbreaker’. Ivan Vanko is Russian. He’s a physicist and ex-convict who builds a similar technology Iron Man has since he claims vengeance on the Stark family.

Now I admit, I don’t think the villainous role Mickey Rourke plays is as strong as it could be. But there were some cool moments when Ivan Vanko uses his electric whips to attack Iron Man in a fight. He also has a cunning instinct in working for Justin Hammer, Tony Stark’s business competitor.

Speaking of which, Sam Rockwell stars as Justin Hammer in the movie. Justin Hammer is the opposite of Tony Stark’s character and it’s easy to hate him. Every time I saw him in this movie, I was like “Him again?!” Hammer is a complete jerk compared to Tony and is far more business ambitious. 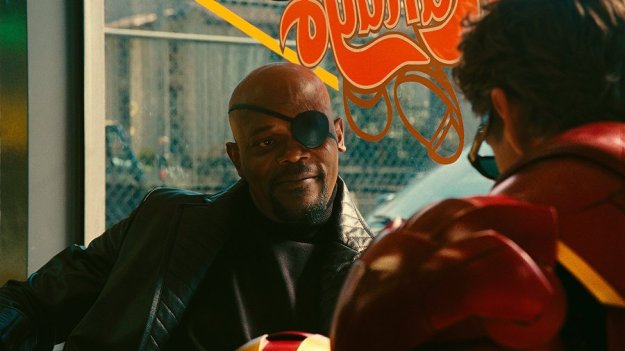 Samuel L. Jackson also stars in this movie as Nick Fury. If you missed his appearance in the post-credits sequence of the first ‘Iron Man’ film, Nick Fury is the director of S.H.I.E.L.D. He meets up with Tony Stark/Iron Man to discuss more about ‘the Avengers initiative’. Will this lead anywhere here? 🙂

I enjoyed the action sequences as ever in this superhero flick, well-directed by Jon Favreau. I especially enjoyed it when Tony Stark got his Iron Man suitcase (that’s got to be cool) to become the suited superhero to fight off Ivan Vanko. I wish there were more fights between Iron Man and Vanko. 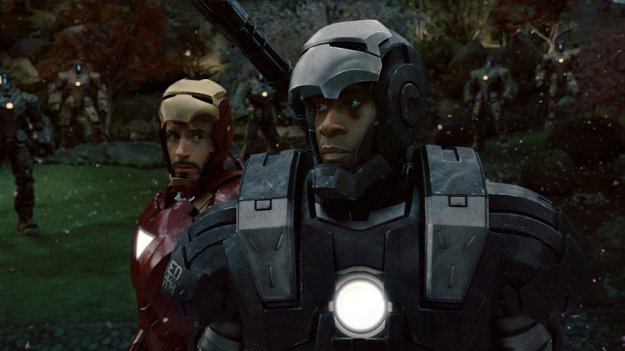 The climatic sequences where Iron Man turns up at Justin Hammer’s Expo and demands to know where Ivan Vanko is are pretty mesmerizing to watch. It gets tense when ‘Rhodey’ as War Machine can’t control his suit and chases after Iron Man in the sky with the Vanko’s armoured drones behind.

Fortunately ‘Rhodey’ gets to have control of his War Machine outfit and both he and Iron Man fight off Vanko’s drones as a duo before Vanko comes in his own armoured suit. Tony should have named ‘Rhodey’ as War Machine at this point and made him his partner. Why didn’t he? It would’ve been cool!

I enjoyed it when Natasha as the Black Widow fights a lot of Hammer’s minions at his factory whilst Happy Hogan fights off one. I like how the film ends with Tony and Pepper now together; Nick Fury debriefing Tony about ‘the Avengers initiative’ and Tony and ‘Rhodey’ getting awarded with medals.

The DVD special features on the 2-disc edition of ‘Iron Man 2’ are as follows. On Disc 1, there’s a commentary with director Jon Favreau.

On Disc 2, there are deleted scenes with commentary options by director Jon Favreau; behind-the-scenes featurettes including ‘Creating Stark Expo’ and an AC/DC music video of ‘Shoot To Thrill’. There’s also a digital copy of the film. There are plenty more special features to enjoy on the Blu-ray release of ‘Iron Man 2’. 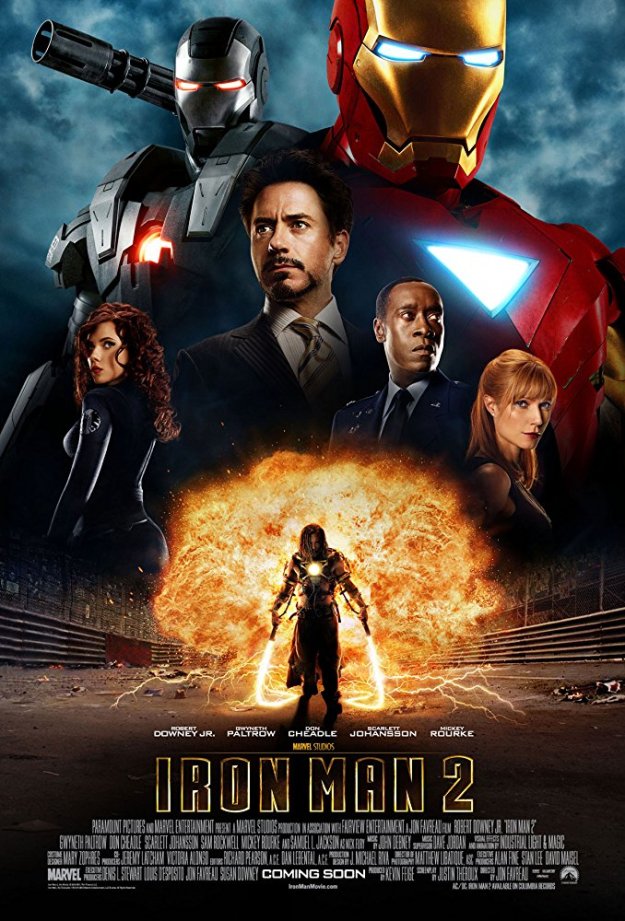 ‘Iron Man 2’ isn’t as good as the first ‘Iron Man’ movie. But it was still fun to watch and I’m glad this movie got ‘Rhodey’ Rhodes to become War Machine and introduced Natasha Romanoff. It’s also a movie that sets things up swimmingly with what the future lies ahead for this superhero film series.

There’s a post-credits sequence at the end of the movie where S.H.I.E.L.D. agent Phil Coulson is in New Mexico. Coulson reports the discovery of a large hammer at the bottom of a crater in a desert. What could this mean?! What is this large hammer? What did it come from? Who does it belong to?!