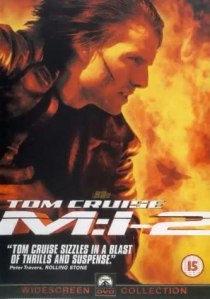 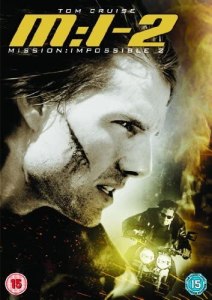 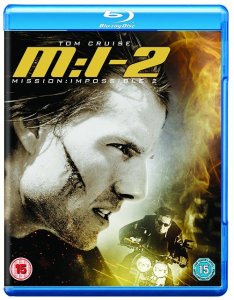 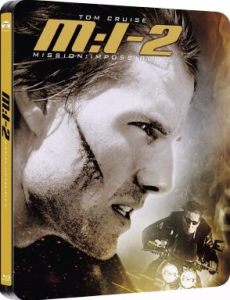 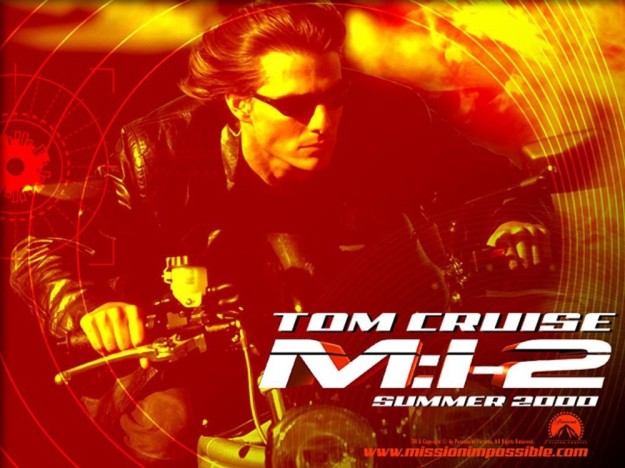 This ‘Mission: Impossible’ movie has some pretty insane moments in it! 😀 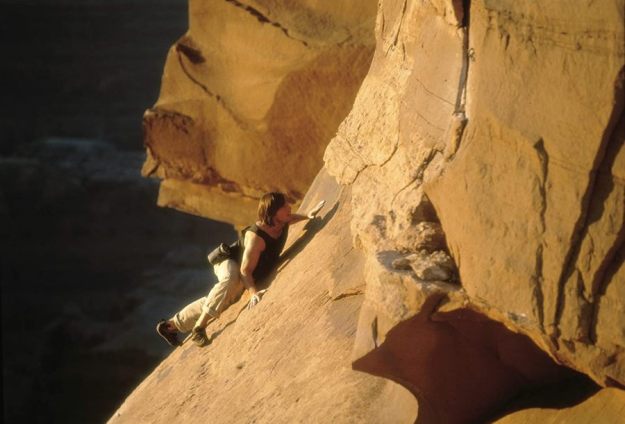 For those needing to be in the know, the ‘M:I’ movies star Tom Cruise as Ethan Hunt. The first time I saw Tom Cruise was in 2005’s ‘War of the Worlds’ movie. He clearly likes being the action hero in any movie he appears in, especially since he’s starred and produced the ‘M:I’ movies over the years.

‘M:I-2’ was made in the year 2000, four years after the first film was made. It was directed by John Woo. Now I didn’t know anything about John Woo’s trademark style in directing films before I saw this film. But it came to my attention he’s well-known for slow-mo action and including his doves. 😀

It’s something I have to keep in mind when it comes to seeing another movie of his. And judging by this film, he must’ve made certain films with certain insane moments. This ‘M:I’ movie happens to feature plenty of bizarre moments that you wouldn’t normally expect to see in a typical ‘M:I’ movie. 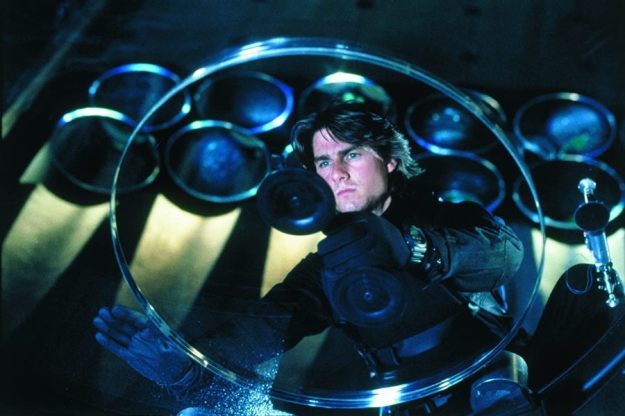 In ‘M:I-2’, Tom Cruise as Ethan Hunt gets sent on a mission to stop a renegade Impossible Missions Force (IMF) agent, Dougray Scott as Sean Ambrose. Ambrose intends to release a deadly weapon, a virus called the Chimera virus, which can likely kill a lot of people. So, essentially…the Covid-19 virus!

Remember! Please keep safe; keep your distance; protect the NHS and save lives. (Pause) How is it I’ve made both the ‘Avengers: Endgame’ review and my ‘Mission: Impossible 2’ review on ‘Bradley’s Basement’ dated by mentioning the coronavirus crisis? It’s a nightmare! Timelord, this is all your fault!

Timelord007 plays a video game in his TARDIS before he looks up at Tim on his view-screen.

Timelord007: (nonchalant) “Sorry, Tim. Did you say something?” 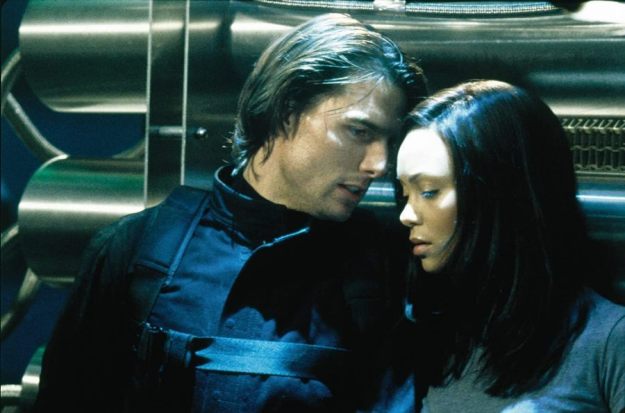 Ethan Hunt also has the help of a beautiful international thief, Thandie Newton as Nyah Nordoff-Hall. But it turns out IMF wants Nyah to infiltrate Ambrose’s criminal activities by returning to him in a previous relationship they had. There’s one problem though. Ethan has fallen in love with Nyah. 😐

But there was still a lot to take in with the story being rather complex in places. ‘M:I-2’ is a movie that requires more than one watch in order to grasp the plot’s complexities. I didn’t find this the case with ‘Rogue Nation’. My Mum had that challenge knowing who’s who with people in disguises!

My Dad did wonder if Steven Moffat wrote the screenplay for this film. 😀 But I did check the back of the Blu-ray cover and apparently the film’s story is by Ronald D. Moore and Brannon Braga. They’ve contributed a lot to the ‘Star Trek’ franchise and wrote my favourite movie ‘Star Trek: First Contact’.

Tom Cruise as Ethan Hunt does deliver a compelling and enjoyable performance in any movie he’s in. He’s into the action/stunt pieces whether it’d be riding a motorcycle or gunning down bad guys at Ambrose’s hideout. It was fascinating how Ethan has a personal stake with Nyah as his love interest.

I recognised Dougray Scott as Sean Ambrose from seeing him in the ‘Doctor Who’ episode ‘Hide’. This is one of his earliest film performances and he’s very good as a villain in this. Apparently, I’ve been informed that Dougray Scott was originally cast to play Wolverine in the ‘X-Men’ films. WOW!!!

In fact, the filming schedule for ‘Mission: Impossible 2’ conflicted with Dougray Scott’s commitment to playing Wolverine in the first ‘X-Men’ film back in 2000. Therefore Hugh Jackman was cast instead. Amazing! Had Hugh Jackson not been cast to play Wolverine, the ‘X-Men’ films would be different. 😐

Thandie Newton as Nyah Nordoff-Hall is very good in this film. She’s a beautiful lady, although it’s a shame that she never returned to the ‘M:I’ film series after being in this movie. I wonder what happened to her. I also question why Ethan didn’t take Nyah with him once she had injected herself with the Chimera virus.

A thing I found bizarre in Ethan and Nyah’s romance is that Ethan tries to ask for her help at first and they end up having a car chase that literally has them over the edge of a cliff. And later on, they have sex together. That is the most insane way to set up a romantic relationship between two characters!

Richard Roxburgh stars as Hugh Stamp, one of Ambrose’s henchmen in the film. Stamp is easily suspicious of Nyah coming back to Ambrose and continuing her relationship with him. He gets one of his fingertips cut off for his suspicions by Ambrose. Ouch! Though Ambrose should have listened to Stamp. 😐

John Polson stars as Billy Baird, one of Ethan’s team members and a helicopter pilot. At first, Billy comes across as cocky and good-humoured even if he might annoy Ethan and Luther Stickell slightly. But Billy does participate well in missions and he helps Ethan get out of a tricky situation that he’s in.

Brendan Gleeson stars as John C. McCloy, Biocyte’s CEO. Biocyte is mainly responsible for the creation of the Chimera virus. I’ve seen Brendan Gleeson in films like ‘Suffragette’ and ‘Paddington 2’. I’m not really sure why he’s working with Sean Ambrose when they’re having a business meeting.

Rade Šerbedžija stars as Dr. Vladimir Nekhorvich, a bio-chemical expert who’s partly responsible for creating the Chimera virus at Biocyte and tries to warn IMF about what’s been created. Sadly, Nekhorvich gets killed off before the film’s opening credits by Ambrose disguising himself as Ethan. 😦

The film also has Ving Rhames as Luther Stickell, who has appeared in all the ‘M:I’ films starring alongside Tom Cruise. I like how Luther is a moral and technical support for Ethan in these ‘M:I’ movies. He keeps Ethan informed about what’s going on, including Nyah about to walk to her death.

The rest of the cast include William Mapother as Wallis; Dominic Purcell as Ulrich; Matthew Wilkinson as Michael and Anthony Hopkins as Mission Commander Swanbeck. Surprisingly, Anthony Hopkins doesn’t get a credit in this film. Not sure if his American accent is convincing or not here. 😐

The film’s music this time around is composed by Hans Zimmer. I quite like the rock guitar-styled version of the ‘M:I’ theme music in the film, although I do think there’s too much rock-styled music in the incidental score. It does not come across as particularly traditional Hans Zimmer music for me.

The Blu-ray special features are as follows. There’s an audio commentary by director John Woo; ‘Behind The Mission’; ‘Mission Incredible’; ‘Impossible Shots’; the ‘I Disappear’ music video by Metallica; an alternate title sequence; ‘Excellence in Film: Cruise’ and ‘Generation: Cruise’. 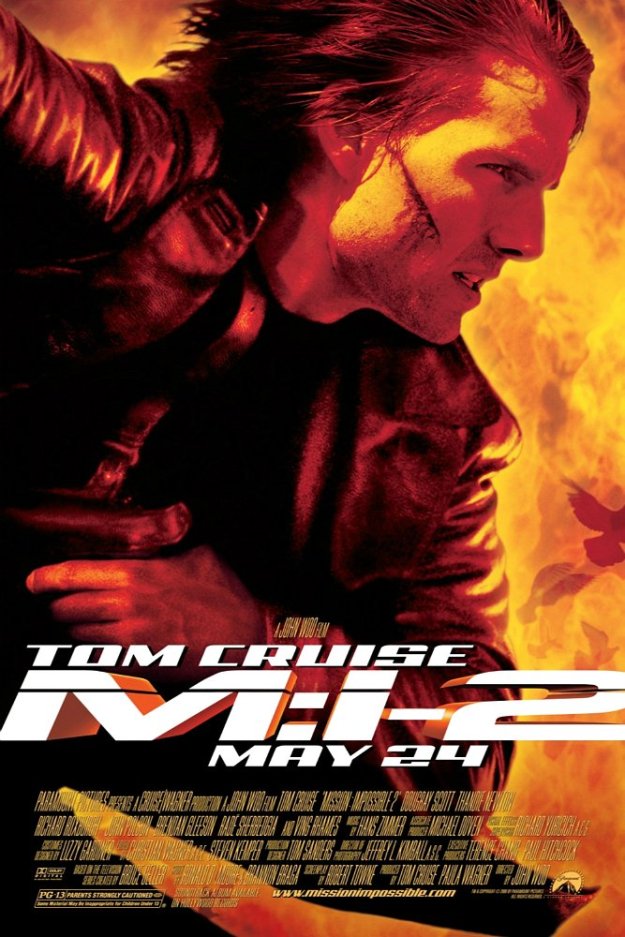 ‘Mission: Impossible 2’ is an enjoyable instalment in the ‘Mission: Impossible’ movie series. I don’t think it’s the best instalment of the lot, but I enjoyed the action sequences and the performances of the cast are good. It’s a film that deserves to be watched more than once in order to understand it. 🙂

The first three ‘M:I’ movies do come across as tonally different compared to what would happen later in the fourth, fifth and sixth films. But they are very entertaining and Tom Cruise does steal the show as Ethan Hunt. So, while ‘M:I-2’ may not be a great ‘M:I’ movie, it’s undeniably pretty entertaining. 🙂

Will Ethan’s personal life be at risk in the next ‘M:I’ movie? 😮