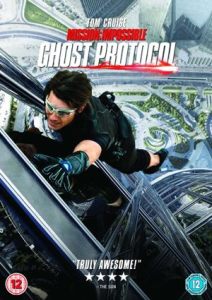 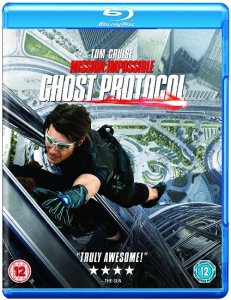 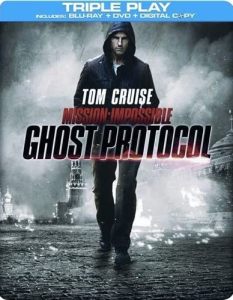 A Mission with No Plan, No Backup and No Choice for Ethan and his Team

Surely ‘the mission should you choose to accept it’ doesn’t give you the option not to accept it! 😀

That was for Mother’s Day by the way! We saw these ‘Mission: Impossible’ movies on Blu-ray and we enjoyed them very much in the build-up to seeing ‘Mission: Impossible – Fallout’ at cinemas in July 2018. We were keeping up-to-date with these ‘M:I’ movies, despite seeing them out of order. 😀 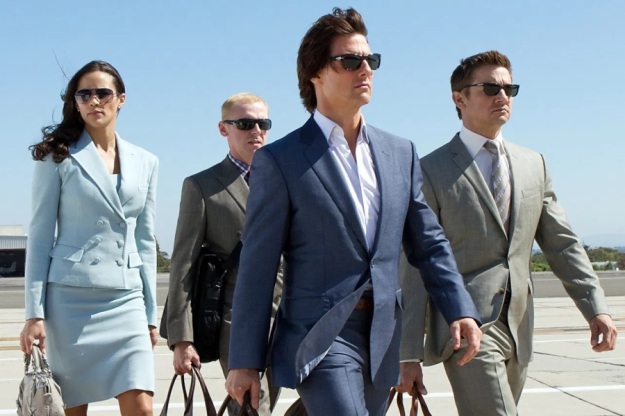 The ‘M:I’ movies are fun, action-packed and thrilling to watch. Tom Cruise is incredibly engaging as Ethan Hunt. The storylines so far in these movies have been decent enough. They may have been uneven in terms of tone, but the films do get better and better and ‘Ghost Protocol’ is rather good. 🙂

‘Ghost Protocol’ is the fourth film in the ‘M:I’ film series and it was released in 2011. It does link quite nicely into ‘Rogue Nation’, especially by the time we reach the end. I’m not sure how the pre-planning went into the first four movies compared to the fifth and sixth films regards consistency. 😐

The ‘M:I’ films can be watched in any order you want. There’s no linking theme evident like in ‘The Lord of the Rings’ films and the Marvel Cinematic Universe films. If the tone was consistent and there was a single producer/director overlooking every film though, I might’ve appreciated them all. 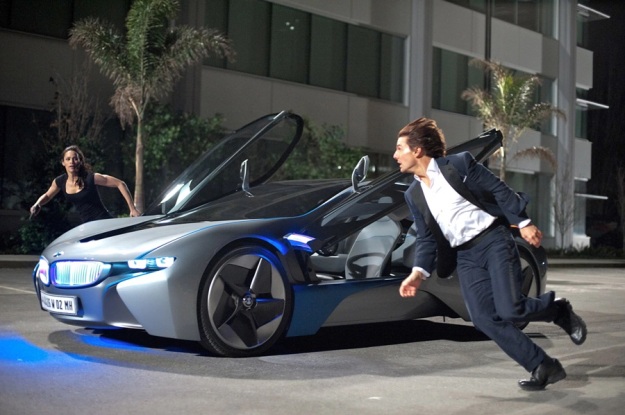 Mind you, the films have been finding their feet gradually compared to how they began. By the time we reach ‘Ghost Protocol’, I’d like to think the ‘M:I’ films are veering away from the original TV series and are doing their own original storylines. Whether you consider that as good or bad, it’s up to you.

Although co-produced by J. J. Abrams who directed ‘M:I-III’, ‘Ghost Protocol’ was directed by Brad Bird. Wow! Brad Bird! He directed of ‘The Incredibles’, ‘Incredibles 2’ and ‘Ratatouille’ from the world of Disney/Pixar. It’s pretty amazing to find a Disney/Pixar film director directing a ‘M:I’ movie.

After watching ‘Ghost Protocol’ a second time, I can see Brad Bird’s directing style in it from watching the ‘Incredibles’ films he did. What with the fast-paced action sequences and some CGI sequences featured like Tom Cruise being chased by a sandstorm, it does feel pretty effective here. 🙂 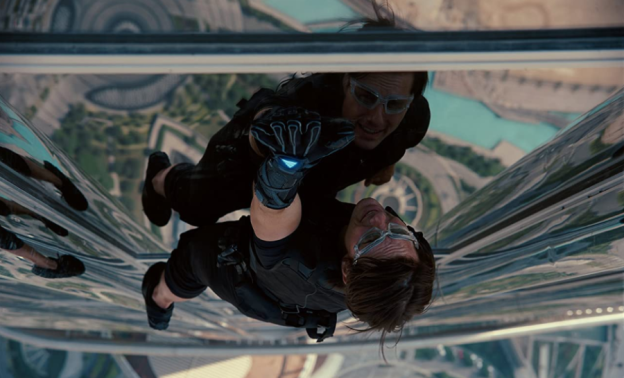 The film also happens to be Brad Bird’s first live-action film compared to doing a CGI-animated film. It’s incredible a CGI animation director can move from that to doing a live-action film in his career. Andrew Adamson also did that from doing the ‘Shrek’ films to doing ‘The Chronicles of Narnia’ films.

In the film, after an Impossible Missions Force (IMF) agent gets killed in Budapest, Ethan gets freed from a Moscow prison and he goes off with his team of IMF agents on a mission to investigate an enemy called Cobalt. Very soon, Ethan and his team get blamed for bombing the Kremlin in the film.

Having to work alone and without the aid of IMF, our heroes have to stop Cobalt from starting a global nuclear war. They soon go to India to stop the baddies. Will Ethan and his team of heroes stop the baddies with some exciting action-packed sequences as well as stop a nuclear missile hitting its target?

‘Ghost Protocol’ does have a fairly straight-forward action-packed storyline, although I do think the film requires more than one watch to get a clear understanding of the plot and to appreciate the realism of the spy world. Mind you, I wonder if that’s often the case with seeing these spy movies. 😐

Like I said, Tom Cruise is very engaging to watch as Ethan Hunt in the film. It was interesting to see how he starts being in a Moscow prison before getting out and being assigned the mission he’s on to stop Cobalt. It seems a lot has happened to Ethan since his marriage to Julia in ‘M:I-III’ came to an end. 😐

I like it when Tom Cruise gets to be all Spider-Man-like by climbing up the tall Burj building in Dubai. If Tom Cruise ends up voicing one of the Spider-Men in the next animated ‘Spider-Verse’ movie, I’m okay with that. 😀 I think the anti-graft gloves idea was used again was in the first ‘Paddington’ movie. 😀 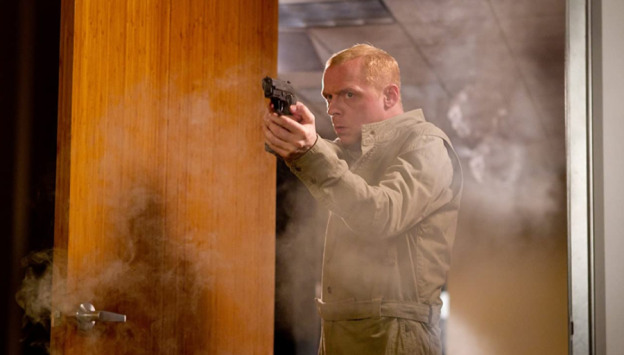 Simon Pegg has done plenty of films and TV before coming to do the ‘M:I’ films and it’s amazing to see him opposite Tom Cruise’s action-styled hero character. Like Mark Gatiss, Simon Pegg gets everywhere nowadays as well as being in the ‘M:I’ films, a ‘Doctor Who’ episode, the ‘Star Trek’ reboot trilogy, etc.

Jeremy Renner makes his first appearance as William Brandt in the ‘M:I’ film series. He would return again to appear in ‘Rogue Nation’. Many will know Jeremy Renner for playing Hawkeye in the ‘MCU’ movies. I’m wondering if Chris Evans or Robert Downey Jr. will appear in an ‘M:I’ movie someday. 😀 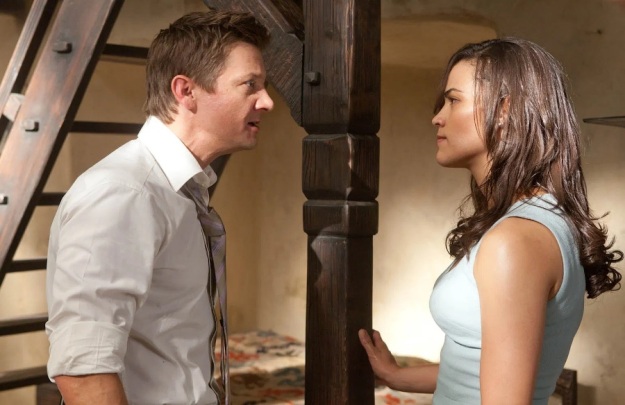 When we first meet William Brandt, he’s the IMF Secretary’s aide and intelligence analyst. But he turns out to be more than that as Ethan discovers. I like the interaction Jeremy Renner’s character had with Tom Cruise and Simon Pegg’s characters, especially when he overcomes fear in a mission. 🙂

Paula Patton stars as Agent Carter. No! Not that Agent Carter from the ‘MCU’! Hayley Atwell plays that character. 😀 The Agent Carter in this film is Jane Carter and she’s the only female member of Ethan’s team. I observe there’s only one female member in a spy team in these moves. Why not two ladies?

Anyway, Jane Carter is a tough cookie, though she’s upset when her lover Trevor Hanaway got killed during the Budapest mission at the film’s beginning. I like that cat-fight scene between Jane Carter and Sabine Moreau, the assassin who killed Trevor Hanaway. Jane threw Sabine out of a window. 😀 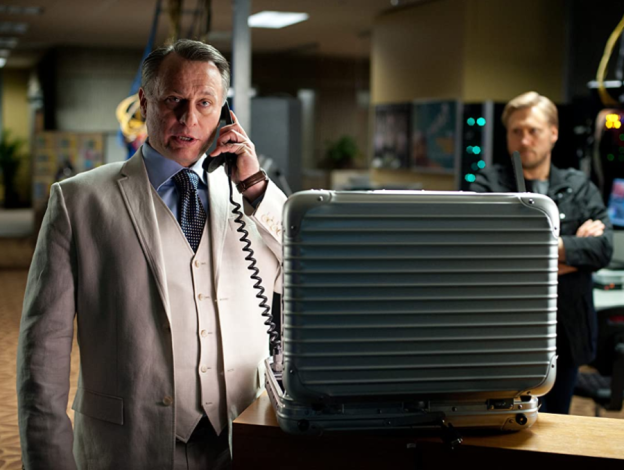 The cast also includes Michael Nygvist as Kurt Hendricks, also known as Cobalt, who’s willing to kill himself to prevent Ethan getting at the suitcase to abort the missile launched to start a nuclear war. There’s Vladimir Mashkov as Anatoly Sidorov, a SVR agent who believes Ethan blew up the Kremlin.

There’s Josh Holloway as Trevor Hanaway, Léa Seydoux as Sabine Moreau, Samuli Edelmann as Marius Wistrom who works for Cobalt, and Anil Kapoor as Brij Nath, an Indian media tycoon whom Jane Carter tries to seduce to get codes from him in India. There’s also Ivan Shvedoff as Leonid Lisenker, a nuclear code expert who’s forced to work for Cobalt.

Tom Wilkinson makes a small uncredited appearance as the IMF secretary before he gets killed off. There’s also an uncredited cameo appearance of Ving Rhames as Luther Stickell. I’m surprised Luther didn’t take part in this movie’s mission like he did in the other movies. Ah well, at least he’s in all ‘M:I’ films so far.

There’s also an uncredited cameo of Michelle Monaghan as Julia Meade-Hunt, Ethan’s wife. It was interesting to see Ethan and Julia gaze at each other from afar despite not being together anymore. This is before Ethan departs for his next mission. It happens to involve a thing called the Syndicate. 😐

Once again, music composer Michael Giacchino returns to do the music for an ‘M:I’ movie in ‘Ghost Protocol’. It was funny when Tom Cruise’s Ethan Hunt said “Light the fuse!” before the film’s opening credits start with ‘M:I’s theme music. A new take is given on the ‘M:I’ theme tune though. 😐 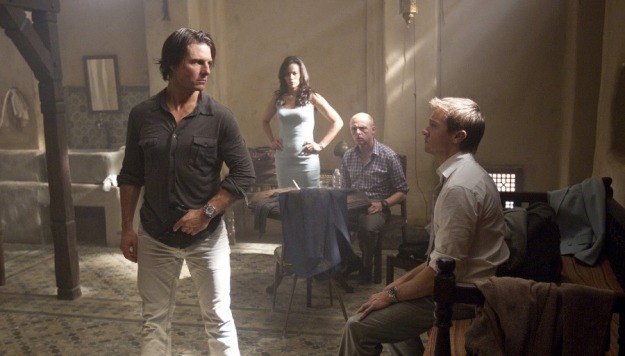 The Blu-ray special features are as follows. There’s ‘Mission Accepted’, which looks into the on-set action with Tom Cruise, producer J. J. Abrams and director Brad Bird. There’s ‘Impossible Missions’, looking into the sandstorm brought to life and the secrets behind the gadgets’. And there are some deleted scenes and an alternative opening to check out. 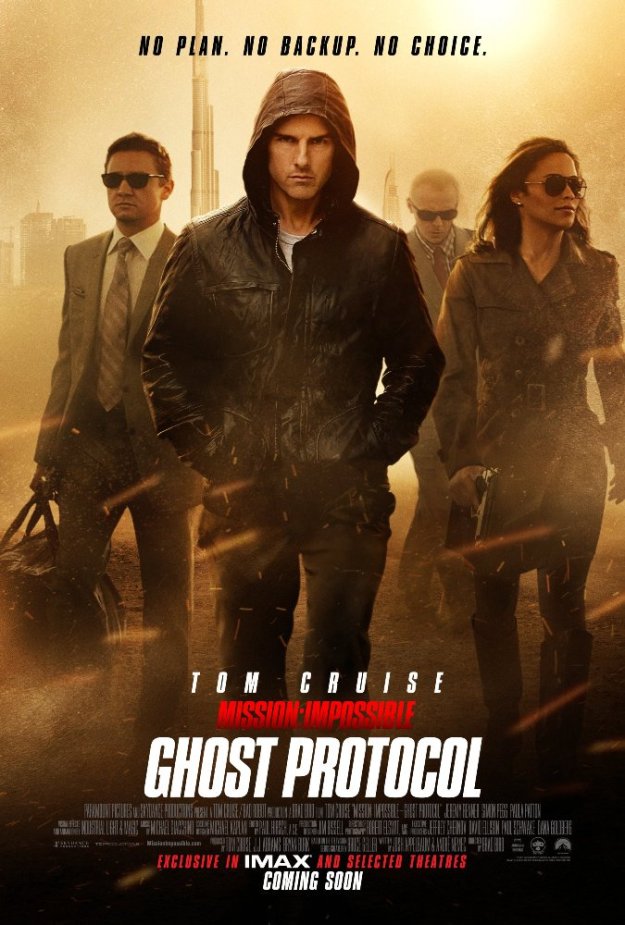 Not bad for a Disney/Pixar director doing his first live-action film here. I also like the camaraderie shared between the four members of Ethan’s team, including him, Benji, Brandt and Agent Carter. Things are only about to get better since the next ‘M:I’ film director delivers his vision to the series.

What is this Syndicate that Ethan’s going to investigate for the next film all about then?