Even after two watches, I find this to be a fascinatingly good ‘Mission: Impossible’ movie! 🙂

I always like to find good character drama in an action-packed movie. That’s certainly the case with ‘M:I-III’, although I find it amazing that the film happens to be directed and written by people who would later become involved in some big-hit franchises, yet I get mixed feelings out of these guys. 😐 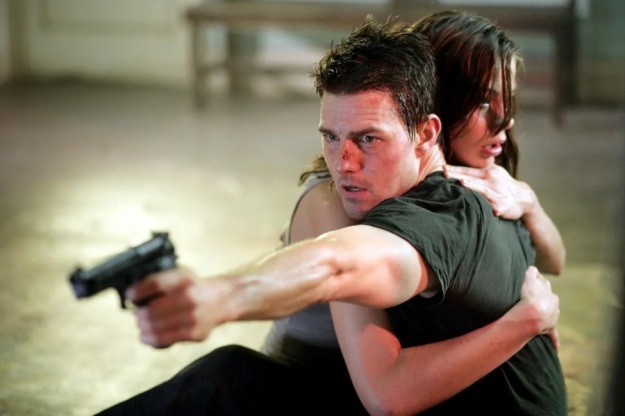 ‘M:I-III’ was directed by…J. J. Abrams, who later did the ‘Star Trek’ reboot trilogy as well as the ‘Star Wars’ films ‘The Force Awakens’ and ‘The Rise of Skywalker’. The movie’s script was by J. J. Abrams as well as…Alex Kurtzman and Roberto Orci, who did the first two ‘Transformers’ films, the first two ‘Star Trek’ reboot trilogy films and ‘The Amazing Spider-Man 2’. No, really, who made this movie? 😀

It’s astonishing that I find ‘M:I-III’ to be a better effort compared to J. J. Abrams, Alex Kurtzman and Roberto Orci’s later efforts in the ‘Star Trek’, ‘Star Wars’, ‘Transformers’ and ‘Spider-Man’ movies I’ve seen. Maybe producers Tom Cruise and Paula Wagner had some influence in that regard here. 😐

It’s always possible. Mind you, it’s equally astonishing that ‘M:I-III’ is also a better effort compared to the first ‘M:I’ movies. I found ‘M:III’ more enjoyable than the first film when my parents and I saw both for my Mum’s birthday in March 2018. It’s why I find the ‘M:I’ films a fascinating set of movies. 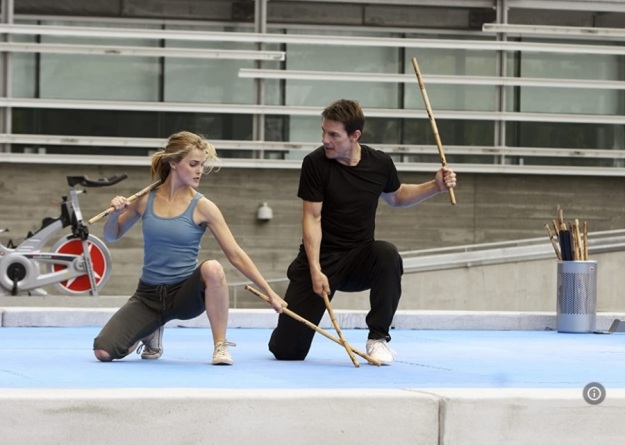 Anyway, what can I tell you about ‘M:I-III’ that’s allowed me to find it so fascinating and very good as a ‘M:I’ film overall? Well, for starters, it has a very tension-filled teaser scene. It takes place from later on in the movie where Tom Cruise as Ethan Hunt is threatened with his wife about to be killed.

I don’t think that’s done often enough in these ‘M:I’ movies and that might be the only time it’s been done so far. I don’t know if that’s an echo of how the TV series did their episodes since I’ve not seen it, but it certainly hooks the audience in and makes you wonder how it’s going to be resolved later on.

The fiancée happens to be Michelle Monaghan as Julia Meade. And, I can see why Ethan would want to get married to Julia. She comes across as very caring and understanding since she happens to be a hospital nurse as well as beautiful. It seems to be an ideal coupling between Ethan and his dear Julia.

But Ethan’s former Impossible Missions Force (IMF) life comes back to haunt him as he gets recruited into another mission. Why couldn’t IMF just leave him alone to enjoy his retirement and marriage? But then again, as George Clooney said in ‘Spy Kids 3D’: “Once an agent, always an agent.”

Ethan soon has a team of secret agents helping him as they deal with an elusive and sadistic arms dealer, Philip Seymour Hoffman as Owen Davian. He’s also an information broker who’s going to sell a mysterious and dangerous object called…the Rabbit’s Foot. We don’t know what it is by the end. 😐

Throughout the film, I found it intense when Ethan dealt with Owen Davian who was pretty vile, threatening to kill his wife after being captured in Vatican City in Italy. I hoped Ethan would save his fiancée (later wife) Julia in time. The movie’s climax was equally intense, seeing Ethan rescuing Julia.

I’m sure I’m repeating myself here, but Tom Cruise is excellent in these ‘M:I’ movies. I like how this movie presents Ethan in a personal dilemma, especially when his wife is at risk during the mission he’s on. It’s a change from it being all action-hero in the first ‘M:I’ films that had a more heavy focus.

Although to be fair, he did that have that romance with Thandie Newton’s Nyah in ‘M:I-2’, which we never get to hear about in this film. Incidentally, why didn’t the filmmakers pursue the option of having Nyah back in this film? Not that I wouldn’t want Julia not to marry Ethan, but I’m curious about it. 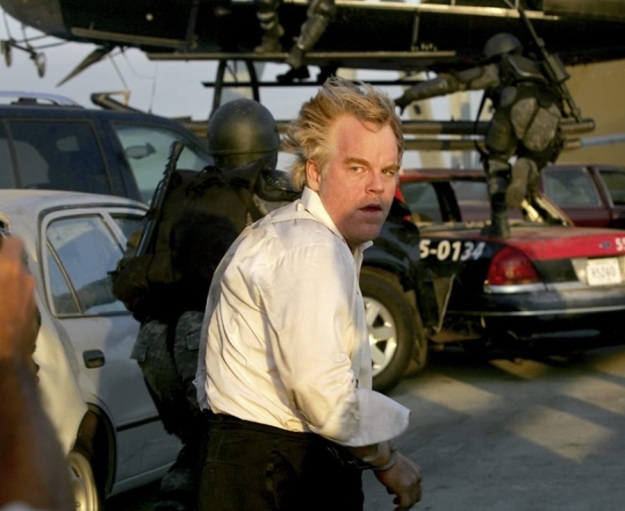 Phillip Seymour Hoffman’s Owen Davian’s motivations as a villain and him wanting to get back at Ethan by threatening his wife’s life might be a little unexplored. But when Davian makes his threats, he’s really serious about it and it’s a credit to Phillip Seymour Hoffman being intimidating in the role.

Ving Rhames returns as Luther Stickell in the film. I like how Luther looks out for Ethan, concerned about the choice he’s making to marry Julia and saying how dangerous it’s when he’s an IMF agent. Luther is always supportive of Ethan, even when he marries Julia and when they’re doing a mission.

Billy Crudup stars as John Musgrave, a fellow IMF agent who assigns Ethan on the mission to first rescue one of his protégés Lindsey Farris and to later deal with Davian. At first, I believed Musgrave to be a good friend and moral supporter of Ethan in the movie. But it turns out he’s anything but. 😮 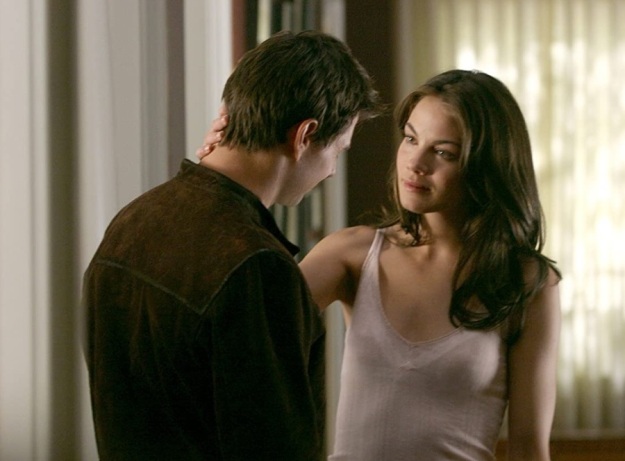 Like I said, it’s easy to see why Michelle Monaghan as Julia Meade would be someone Ethan would want to marry as she’s clearly kind-hearted and caring. Even though she becomes a damsel in distress and doesn’t know of Ethan’s IMF history, I like how she holds her own with a gun by the end.

Jonathan Rhys Meyers stars as Declan Gormley, an Irish IMF agent who works as the pilot for Ethan’s initial mission to rescue Lindsey Farris. I like how Ethan has supportive team members and at least we do get to know them a bit compared to the first film where most of Ethan’s team got killed off. 🙂

There’s also Maggie Q as Zhen Lei, the fourth member of Ethan’s team in ‘M:I-III’. I like how Zhen works undercover during a party scene in Vatican City to capture Davian. I also like that little prayer moment Zhen has and how she shares about it to Declan while they’re waiting for Ethan in Shanghai. 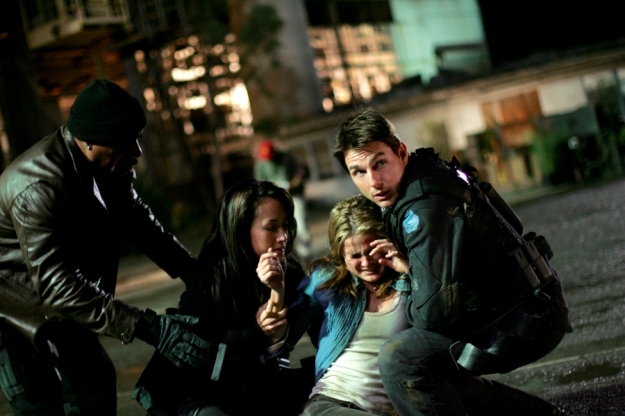 Keri Russell stars as Lindsey Farris, Ethan’s protégé, who gets killed with an explosive pellet in her head after Ethan’s team try to rescue her in Berlin. It’s sad how Lindsey got killed off and it seems her and Ethan were rather close. Lindsey may have some really vital information for Ethan though. 😐

And there’s Laurence Fishburne as Theodroe Brassel, IMF’s director who reprimands Ethan and Musgrave after the failed rescue attempt of Lindsey Farris. Laurence Fishburne is well-known for playing Perry White in the ‘DC Extended Universe’ and he voiced the Silver Surfer in ‘Fantastic Four: Rise of the Silver Surfer’ as well as being in ‘Ant-Man and the Wasp’. Could Brassal be the real villain?

The film also features Simon Pegg as Benji Dunn, an IMF technician who later helps Ethan to find his wife Julia who’s trapped in Shanghai by Davian and his lot. I’m sure Simon Pegg won’t be important in these ‘M:I’ movies. It’s not like he will be back for the fourth, fifth and sixth ‘M:I’ movies, right? 😀

Like with the first two films, the twists and turns are always a pleasure to watch. There may not be many masks for Tom Cruise to wear, like when he has to pose as Davian during a party in Vatican City, but it gets tense when certain characters you think are heroes happen to be the villains here. 🙂

The movie’s music has gone back to a more traditional incidental orchestra music unlike the rock-guitar-styled music for ‘M:I-2’. ‘M:I-III’s music is composed by Michael Giacchino, who’s done some very impressive musical work for many films. The ‘M:I’ theme music is spot on by Michael Giacchino.

The Blu-ray special features are as follows. On Disc 1 of a 2-disc Special Edition, there’s an audio commentary by Tom Cruise and director J. J. Abrams as they discuss their experience making ‘M:I-III’.

For me, ‘Mission: Impossible III’ has been a satisfying film to watch. While I might not praise J. J. Abrams, Alex Kurtzman and Roberto Orci for their efforts in later movie franchises, I feel their efforts for ‘M:I-III’ is well-justified as the tension and drama are felt and I’m invested throughout the film. 🙂

It was great for my parents and me to watch the ‘M:I’ films on Blu-ray. At the time of ‘M:I-III’, we had gaps to fill in like the second and fourth film in order to build up to watching the sixth film on the big screen. But we’ve found these movies enjoyable and I believe Tom Cruise is to thank for that. 🙂

Will Ethan encounter ‘ghosts’ in the next ‘M:I’ movie? 😀