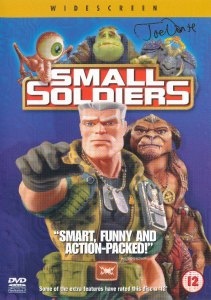 The Gorgonites vs. The Commando Elite 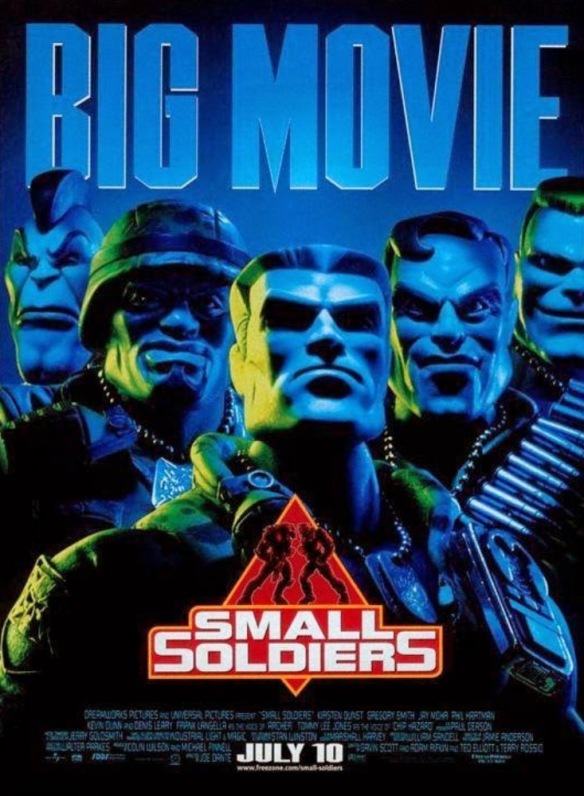 This is a scarier live-action version of ‘Toy Story’! 😀

Does anyone remember this film? I love ‘Small Soldiers’! Yeah, I know it had mixed reviews when it came out at cinemas back in 1998, but I still love watching this film whenever I see it. I found the story and the characters quite clever and compelling. It gave me nostalgia on how I played with toys. 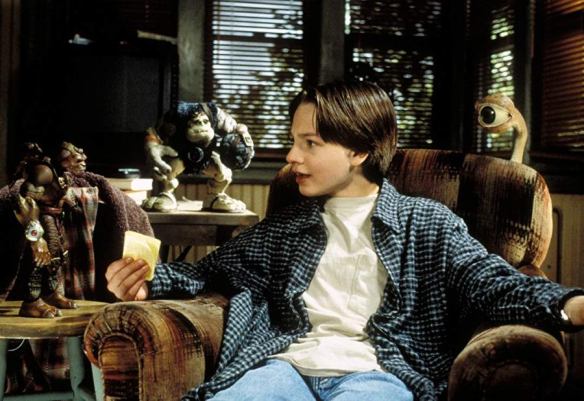 I saw this film when friends of mine showed it on VHS. I didn’t get to see the full movie sadly, but I eventually got ‘Small Soldiers’ on DVD back in 2001. This was in the early days of DVD releases, but it was still good! I enjoyed the DVD special features that accompanied it like the making-of featurette!

A teenager named Alan Abernathy gets the Gorgonites and the Commando Elite toys to sell at his Dad’s shop and gets more than he bargained for. It’s soon a fight for survival. Alan and the Gorgonites must stop the Commandos creating terror when they intend to destroy every Gorgonite. 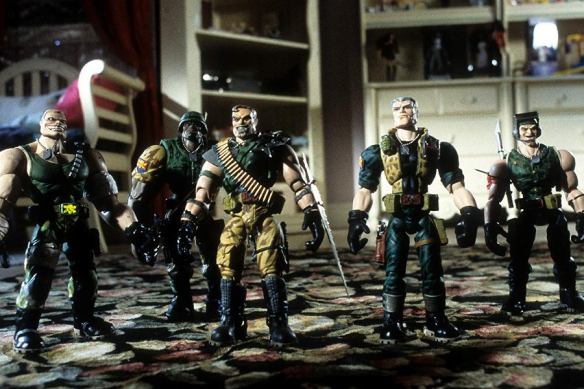 This movie brings me nostalgia from when I used to play ‘Beast Wars’ and ‘Power Rangers’ toys as a kid. The ‘Toy Story’ films did that as well but it’s fun to see it in a live-action environment with a combination of animatronics and CGI animation to create the toys interacting when they come alive.

An issue that does get raised in terms of storytelling is why the Commandos end up being the bad guys when they’re supposed to be the good guys and the Gorgonites vice versa. I agree; it would’ve been nice to have a scene explaining why the Gorgonites are so noble and good instead of being evil.

Perhaps the creator of the Gorgonites – Irwin Wayfair – decided to go against his boss Gil Mars’ wishes to make them bad guys since he wanted them to be good in the first place. That would explain why the Gorgonites are so peace-loving compared to the evil bad guys that they are made out to be. 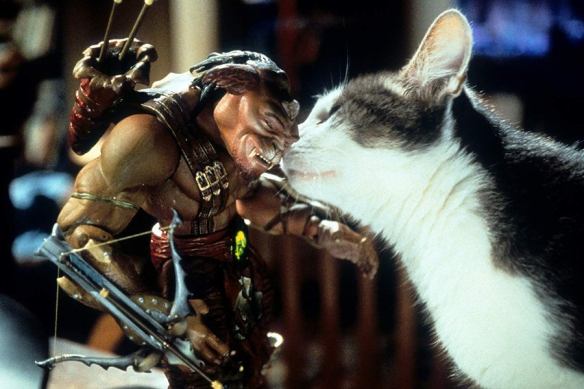 Now here’s the thing. I initially thought the Gorgonites were the bad guys instead of the Commando Elite when I saw the toys being promoted in the UK. So it came as a surprise, but a clever one, where it turned out not to be the case and I enjoyed the movie all the more for it, finding it very intriguing.

I’m disappointed ‘Small Soldiers’ didn’t have a legacy in terms of appearing in their own TV show like ‘Transformers’ and ‘Beast Wars’. That would’ve been exciting, especially in terms of the toys sold at the time in the UK. But due to the mixed reception this movie had, it sadly didn’t turn out to be the case.

The leader of the Gorgonites is Archer, voiced by Frank Langella. I like how Archer snuck into Alan’s backpack when he returned home from working at his dad’s toy shop. Archer is a soft-spoken character who warns Alan of the impending danger there’ll be once the Commandos come to attack.

I saw this movie before seeing Frank Langella in ‘Superman Returns’ on the big screen. I also didn’t realise that Frank Langella appeared in three ‘Star Trek: DS9’ episodes before voicing Archer in this movie. I did like how the friendship between Archer and Alan gets developed as the film progresses.

The leader of the Commando Elite is Major Chip Hazard, voiced by Tommy Lee Jones. This was before I saw Tommy Lee Jones in films like ‘Batman Forever’ and ‘Captain America: The First Avenger’. I liked how he voiced Chip as a military commander determined to destroy the Gorgonites.

Chip is pretty hell-bent to destroy Archer and the Gorgonites and he and the other Commandos consider the humans like Alan to be Gorgonite allies. It is all fed into their computer chip programming as toys, but watching Chip and the Commandos conduct strategies makes them clever.

Gregory Smith stars as Alan Abernathy, the young typical teenager who used to be a troublemaker at school and is trying to redeem himself. I enjoyed his journey in the film. He’s a smart alec, but a charming smart alec. He even fancies Christy, the girl next door, who he tries winning her heart here.

Alan is surprised to find Archer in his backpack and coming to life when he brings him home. He’s shocked when the Commandos wreck his Dad’s toy store in the attempt to destroy the Gorgonites. Alan teams up with the Gorgonites to stop the Commando Elite and to rescue the girl of his dreams. 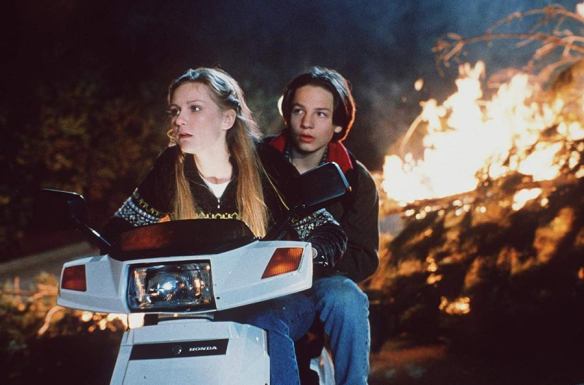 Christy is a warm-hearted girl who gets caught up in Alan’s adventure with the Gorgonites and the Commando Elite. She gets captured by the Commandos who deform and control her Gwendy dolls that become evil. But after being a damsel in distress, she gets to kick butt and she even kisses Alan.

Alan’s parents are Kevin Dunn as Stuart and Ann Magnuson as Irene. I saw Kevin Dunn in this film before seeing him in the ‘Transformers’ films by Michael Bay. Stuart and Irene aren’t trusting of Alan, especially when he’s caused trouble in the past. Will they believe what happens with the toys?

Well hopefully, especially since Irene’s pretty good with using a tennis racket to defend the house against the Commandos attacking it. Alan also asks his Dad to trust him when going out to short-circuit the Commandos once and for all. A pity Stuart gets ‘packed’ with a net by a Link Static toy! 😀 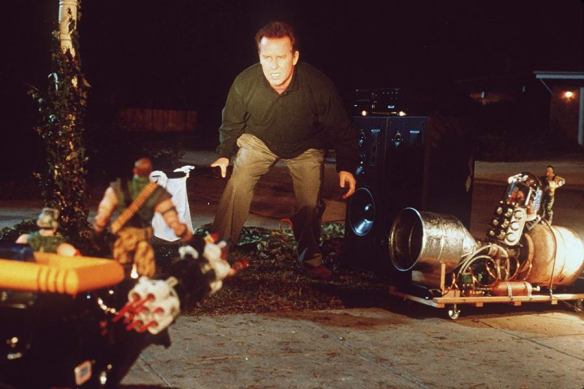 Christy’s parents are Phil Hartman as…Phil… 😀 …and Wendy Schaal as Marion. Christy also has a kid brother, Jacob Smith as Timmy. Hey, that’s my name! 😀 I’ve seen Phil Hartman before in the Christmas film ‘Jingle All The Way’. This was his last film role as he tragically died afterwards. Sad that.

With that said, Phil Hartman’s character in this movie is no different to the one he played in ‘Jingle All The Way’, being a jerk especially to his neighbours and seeming to be a know-it-all. It’s interesting how Phil coped under pressure with the Commandos attacking the neighbourhood during the night.

It’s interesting how Larry seems to be arrogant and confident in his selling the Commando Elite whilst Irwin is nervous and anxious. Irwin is shocked when Larry inputs munitions chips in the toys to come to life. Irwin has a more moral centre than Larry once they discover a problem with these toys.

Denis Leary stars as Gil Mars, the head of GloboTech Industries who employs Larry and Irwin at the Heartland Toy Company. Here’s another Spidey connection! Denis Leary would later play George Stacy in ‘The Amazing Spider-Man’ and also voice Diego the sabre-toothed tiger in the ‘Ice Age’ films.

In the film, Gil Mars is a confident executive and a foul mouth who wants the new Gorgonite and Commando Elite toys to do one specific thing – apart from making out whose good or who’s bad. He wants the toys to do exactly what they do as action-figures in the commercials. A pretty dodgy idea!

The film also features Alexander Wilson as Ms. Kegel, Gil Mars’ secretary; Dick Miller as Joe, the toy company lorry driver and Robert Picardo (who is well-known for playing the Doctor in ‘Star Trek: Voyager’) as Ralph Quist. There’s also Jonathan Bouck as Brad, who is Christy’s boyfriend in the film.

The rest of the Commandos include Brick Bazooka (voiced by George Kennedy); Butch Meathook (voiced by Jim Brown); Kip Killigan (voiced by Ernest Borgnine); Nick Nitro (voiced by Clint Walker) and Link Static (voiced by Bruce Dern). I found these guys as pretty rough army types to be ‘heroes’.

There are also the Gwendy dolls, voiced by Sarah Michelle Gellar and Christina Ricci. Those Gwendy dolls were pretty scary to see, especially when they appeared deformed and controlled by the Commandos, attacking Christy in her bedroom. Thankfully this film was rated a 12 on the DVD I have.

The film features an amazing musical score composed and conducted by Jerry Goldsmith. This was the first time I heard one of Jerry Goldsmith’s musical scores in a film before seeing the ‘Star Trek’ movies he did. I like the ‘Small Soldiers’ musical score, finding it to be compelling and action-packed. 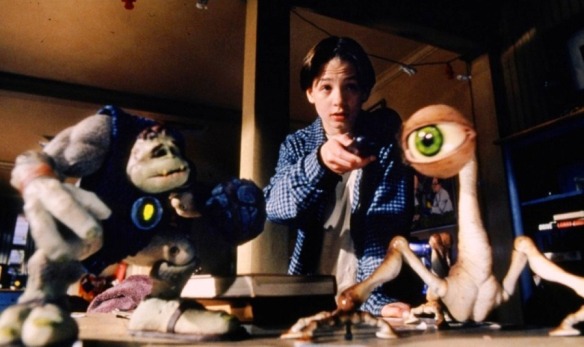 The DVD special features are as follows. There’s the trailer for the movie; the behind-the-scenes making-of featurette; bloopers; deleted scenes and special effects; cast and crew biographies and production notes. 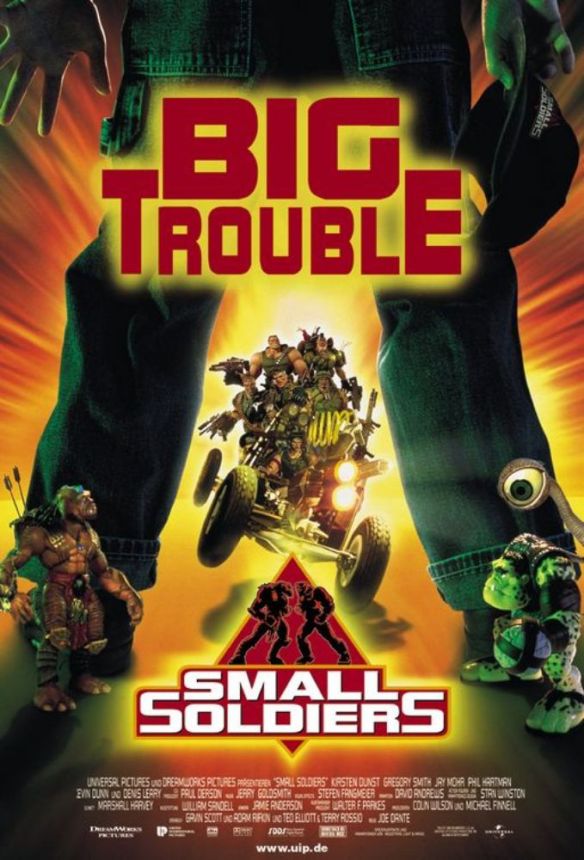 ‘Small Soldiers’ remains one of my favourite childhood memories and one of my favourite films. It’s not perfect, but it’s very gripping and entertaining to watch. If you enjoyed playing with action-figure toys as a kid like I did, then you should have no problem enjoying this film throughout in the process.

You’ll find some good messages in it and it’s interesting to see a scarier live-action version of ‘Toy Story’ here. It’s also fun to see actors and actresses I recognise nowadays. Who would’ve thought Kirsten Dunst would go on to play Mary Jane in my favourite ‘Spider-Man’ movie trilogy? I didn’t! 😀