Camelot and King Arthur with Bing, Rhonda and William 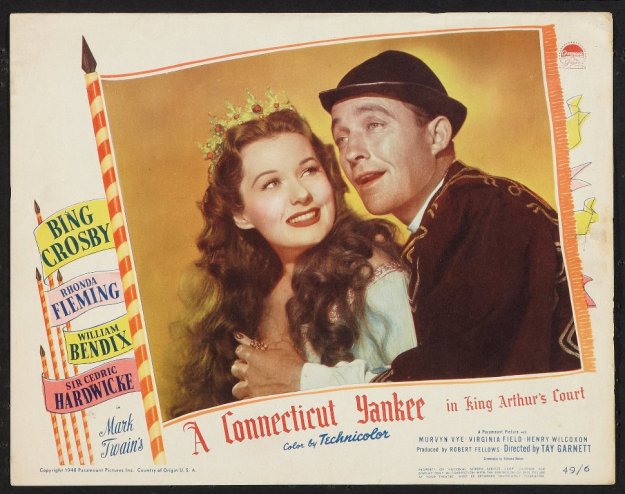 The movie was released in 1949 and was directed by Tay Garnett. It stars Bing Crosby, Rhonda Fleming, Sir Cedric Hardwicke and William Bendix and was based on that same novel by Mark Twain.

I’ve not read Mark Twain’s novel, though I’m sure it has some entertainment value and earned its fans over the years. The film was equally popular and it became one of the highlight films of 1949. 🙂

The film is about a 1912 mechanic named Hank Martin, played by Bing Crosby. He bumps his head during a thunderstorm, I think, and finds himself in Arthurian Britain in 528 AD with knights and such.

I’ve no idea how Bing’s character ended up in Arthurian Britain. It never gets explained. If it was a time machine like ‘Doctor Who’s TARDIS or ‘Back to the Future’s Delorean, I’d be happy about that.

But no! He’s just…there, woken up by a knight who calls him a dragon or a demon. Even a thunderstorm would have been satisfactory. It’d probably be a weak explanation, but I’d accept it. 🙂

Hank is soon befriended by the knight William Bendix as Sir Sagramore and he gains power by judicious use of technology. Hank also falls in love with the king’s niece, Rhonda Fleming as Alisande.

Or ‘Sandy’ as Hank would later call her. It’s amusing how some of these Bing Crosby movies can end up being romantic comedies in some form or other, especially when it’s a fantasy movie in Arthurian legends.

However, ‘Sandy’ or Alisande la Carteloise is engaged to Henry Wilcoxon as Sir Lancelot, who doesn’t appear until much later on in the film. Sir Lancelot becomes jealous in finding out about this affair. 😮

He challenges Hank to a duel, though it’s not the way he expected. Hank outwits him with tricks and not actually killing him, which upsets Sandy since she thinks Hank was humiliating Lancelot’s honour.

Whilst I did find that ungrateful on Sandy’s part since violence and death was an option Hank didn’t choose, he soon meddles in the politics of King Arthur’s kingdom when trouble ensues in the movie. 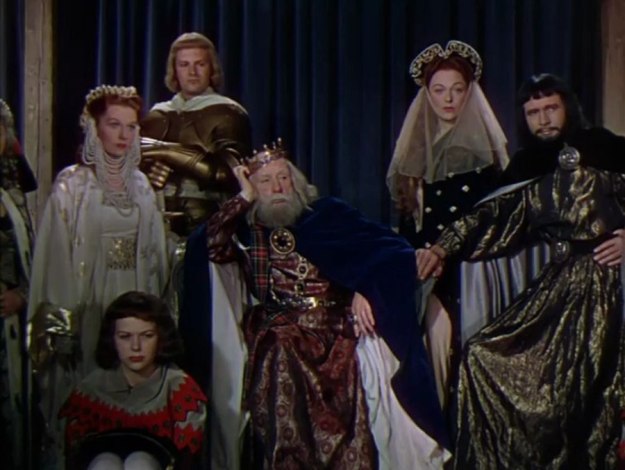 Sir Cedric Hardwick stars as King Arthur in the film. King Arthur is played more for laughs in this film. He’s taken in by Hank’s advice with finding out whether the people like him by dressing as a peasant.

I like Bing Crosby’s performance in this movie and how he blends into Arthurian Britain being a full-blooded American. This movie gives him a chance to dress up in a costume and look like Robin Hood.

The love story between Hank and Sandy was sweet as I watched it in the film. It made me root for this couple in wanting them to be together. I do wish that I had a Maid Marion fall in love with me. 🙂 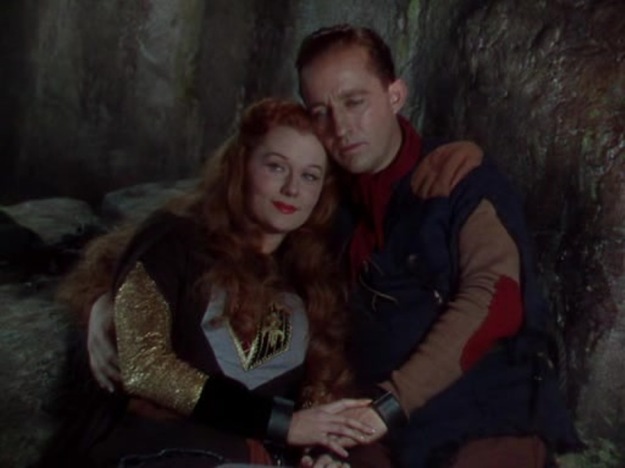 Clara Oswald from ‘Robot of Sherwood’ springs to mind. 😀 The film also features Murvyn Vye as Merlin, who turns out to be pretty villainous in this film in wanting to ruin the King and expose Hank.

I couldn’t help joke that Merlin was like Wormtongue from ‘LOTR’ and that Arthur was like Théoden when seeing them both in a scene together. I wonder if Peter Jackson was inspired by this movie. 😀

There’s also Virginia Field as Morgan le Fay, who must end up as Morgana or Morgaine in Arthurian Legend, even though we don’t clearly see that happen in the film. I think the film should’ve shown it.

The music featured in this film includes songs like ‘If You Stub Your Toe on the Moon’, ‘When Is Sometime’, ‘Once and for Always’ and ‘Busy Doing Nothing’. My Dad sung that last song recently. 😀

It’s strange when Hank sees the owner of a British castle owned by Lord Pendragon (played by Sir Cedric Hardwick) and he meets his niece who looks just like Sandy. This was bizarre to watch here. 😀

‘A Connecticut Yankee in King Arthur’s Court’ doesn’t make a lot of sense, but it’s a ton of fun to watch. I can’t deny the time travel aspects are weak, but the movie does provide a rather fun romp.

‘The Bing Crosby Collection’ of movies has been fun to watch. I liked some of the jazzy films like ‘Rhythm on the River’, ‘Blue Skies’, ‘The Emperor Waltz’ and ‘A Connecticut Yankee in King Arthur’s Court’. ‘Going My Way’ and ‘The Bells of St. Mary’s’ could be slow and sedate for anyone watching. 😐

But those movies are just as pleasant as every Bing Crosby movie is. I wouldn’t like to think these films will be forgotten as Bing Crosby represents the same league of performers like Fred Astaire, Ginger Rogers and Judy Garland representing a golden age of cinema and were entertaining indeed. 🙂