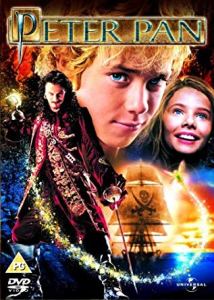 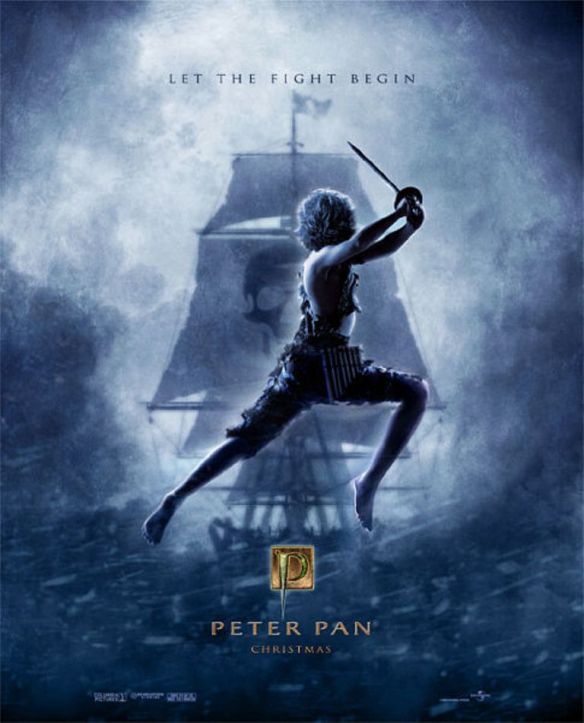 This is a ‘Peter Pan’ movie that seems to have been forgotten about by most people.

In December 2003, I saw the ‘Peter Pan’ movie directed by P.J. Hogan at the cinema! It starred Jeremy Sumpter as Peter Pan and Jason Isaacs as Captain Hook. It was released on Boxing Day in that year as I recall, though I saw it the day after at the cinema. I enjoyed the movie and have fond memories of it.

Nowadays when people think of Peter Pan in terms of movies, the films that come to mind are the Disney animated film and the ‘Hook’ film by director Steven Spielberg. Somehow the 2003 film gets overlooked. This is a shame as I consider it to be a worthy film adaptation on J.M. Barrie’s book and play. 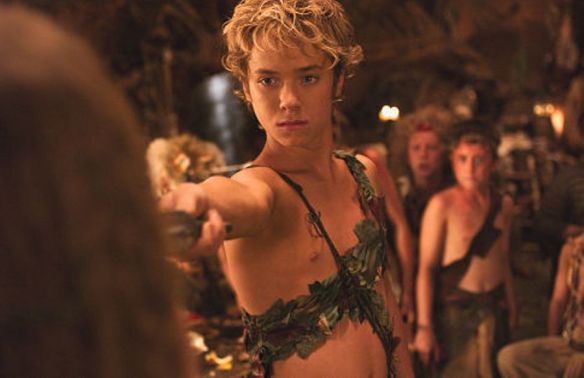 Because the ‘Peter Pan’ 2003 film was released in the same month as ‘The Lord of the Rings: The Return of the King’. And that was a huge success both financially and critically. So yeah! That was a tough act to follow in the competition it got. Since then, the 2003 ‘Peter Pan’ movie never got a sequel.

Like I said, it’s a huge shame the 2003 ‘Peter Pan’ film didn’t do well at the box office. But looking at the film in retrospective, does it still retain the positive reception it got after all these years? I admit I hadn’t the film in a long while by the time I came to this review, but I hoped it’d still be a very good film. 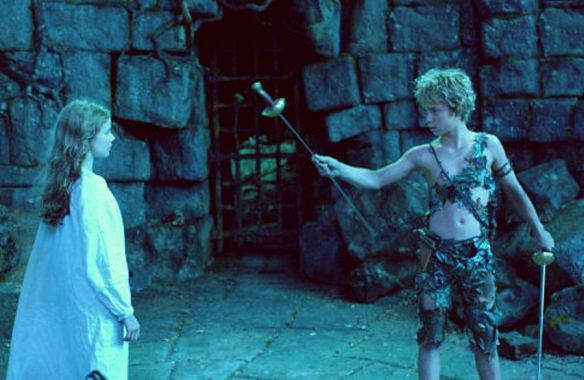 And after seeing it all these years on DVD…yeah! It’s still very good. It keeps to what the spirit of Peter Pan is about with a unique look in terms of production and costume design. It’s also very impressive to see a ‘Peter Pan’ movie where young actors play the character parts that would have been children.

I found how impressive the film was in conveying the emotional aspects of the ‘Peter Pan’ story, especially as it came to decisions on growing up and not being a child anymore. This was well-balanced by the sword-fighting and the action sequences. Peter and Wendy’s romance was well-handled too. 🙂 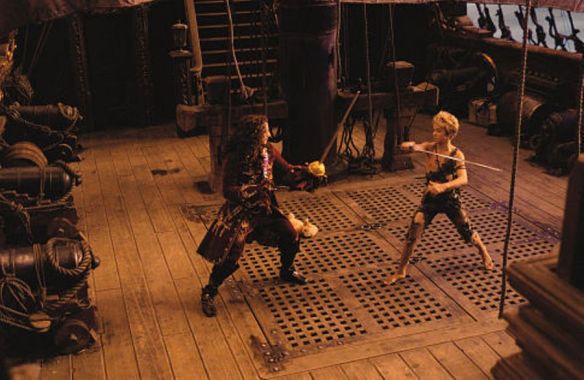 For those of you unaware of the ‘Peter Pan’ story, it’s about the Darling children given the chance to not grow up when they join Peter Pan and fly off to Neverland for adventures against Captain Hook and his pirates. Whilst in Neverland however, Wendy grows to learn the importance about growing up.

Having seen other versions of ‘Peter Pan’ in the Disney film; the ‘Hook’ film and even the ‘Return to Neverland’ Disney sequel film, I was able to home in on very familiar elements that were in the ‘Peter Pan’ story. I knew what to expect in how the story went whilst finding some well-acted emotional bits.

Jeremy Sumpter is the star of the movie, playing Peter Pan himself here. I enjoyed his performance as Peter Pan, portraying the confidence, charm and young-hearted attitude of the character. I would question why Peter Pan sounds American in this movie, but then the Disney and ‘Hook’ films did the same thing. 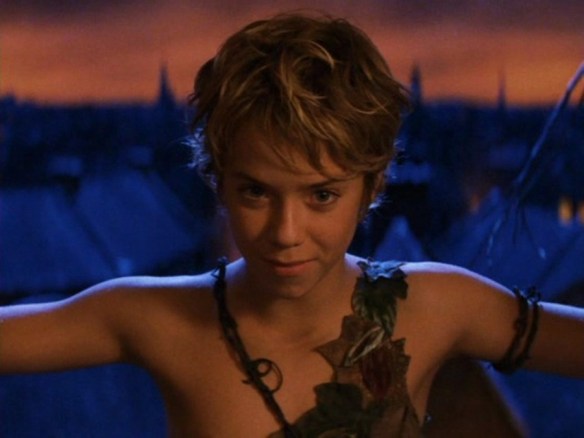 What I found amazing about Jeremy Sumpter’s portrayal in Peter Pan is how he’s able to display a range of emotions from being sad to angry to happy. Peter clearly loves Wendy and doesn’t want her to leave Neverland when bringing her and her brothers there. But he does struggle in sharing his feelings.

Peter’s also a very good fighter in this movie in terms of sword-fighting and outwitting Captain Hook at times. He’s not very keen on adults and considers Hook a great enemy. It was tense and dramatic when Peter was being weakened by Hook in his feelings for Wendy. It made for such an emotional climax!

Rachel Hurd-Wood stars as Wendy Darling in the film. I like Rachel’s performance as Wendy, especially when she interacts with Peter Pan and grows to have feelings for him. I like how she became a surrogate mother for the Lost Boys and her two brothers John and Michael when they’re in Neverland. 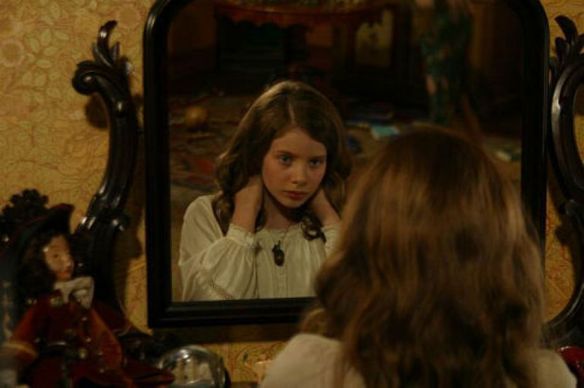 Wendy’s also good in terms of using a sword and get to fly. She and Peter start well together in terms of a friendship before it develops into something more. They dance together on a moonlit night when flying. But whilst Wendy wishes for more in their relationship, Peter isn’t willing which causes tension.

I liked the scenes where Wendy meets Captain Hook on his ship and when she comes to realise that she needs to grow up. She still loves Peter, but she needs to grow out of her childhood in order to find true happiness. I did like that moment when Wendy actually kissed Peter during the film’s climax here.

Jason Isaacs stars as Captain Hook in the movie. Who knew he would go on to be a captain of a starship in ‘Star Trek: Discovery’ years afterwards. 😀 Jason Isaacs has also been in the ‘Harry Potter’ movies. I found his performance as Captain Hook great as he’s so into the role as well as the other actors in this. 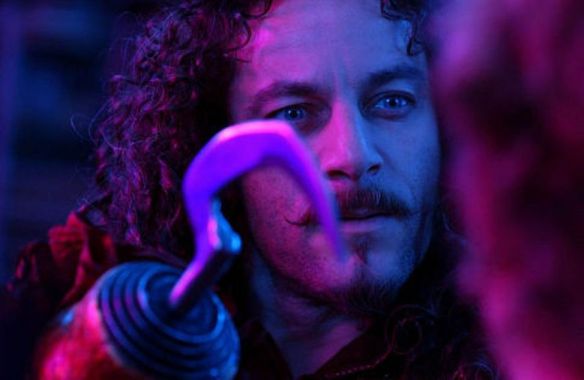 The Hook that Jason Isaacs plays is pretty vicious, especially when he kills those who question his orders or annoy him. He’s so hell-bent on wanting to ruin and kill Peter Pan in the film. Hook is also pretty manipulative as he attempts to win Wendy over as well as weaken Peter Pan in his feelings for Wendy.

The actor of highlight for me was Richard Briers as Mr. Smee. I’ve seen Richard Briers in ‘The Good Life’, ‘Ever Decreasing Circles’ and ‘Monarch of the Glen’. I saw this film before seeing him in a ‘Doctor Who’ story and a ‘Torchwood’ episode. 😀 Him playing Smee in this ‘Peter Pan’ movie was a joy indeed. 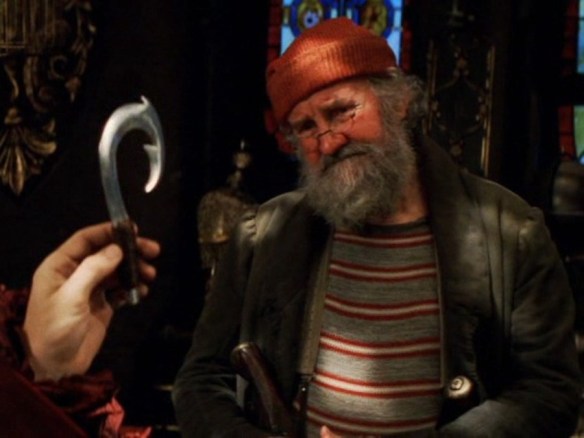 Every time I saw Richard Briers as Smee, I found him funny. The lines he delivered in that Richard Briers manner I knew so well were so hilarious. This is especially when Smee and another pirate ‘let John, Michael and Tiger Lilly go’ as well as his reaction to Hook about to be attacked by that hungry crocodile.

There’s also Harry Newell as John and Freddie Popplewell as Michael, Wendy’s brothers. There’s also Ludivine Sagnier, a French actress, who plays Tinker Bell in the film. Unlike the ‘Hook’ film but very much like the Disney film, Tinker Bell doesn’t talk throughout the film and she’s very jealous of Wendy. 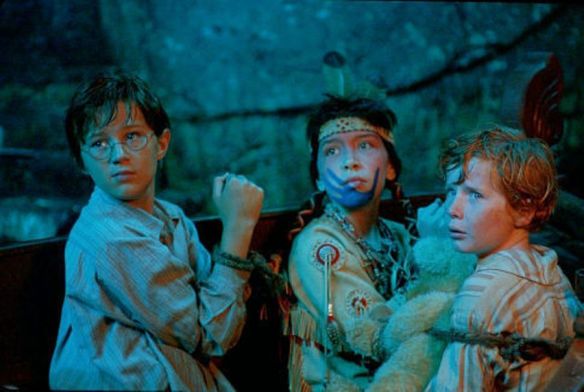 And who can forget the dog Nana, played by Rebel in the film? 😀 There’s also Carsen Gray as Tiger Lily and Geoffrey Palmer (how come I didn’t recognise him when I first saw this) as Sir Edward Quiller Couch of George Darling’s bank. The scenes where Nana comes to George with Sir Edward were funny.

The Lost Boys include Theodore Chester as Slightly, Rupert Simonian as Tootles, George MacKay as Curly, Harry Eden as Nibs and Patrick Gooch and Lachlan Gooch as the twins (what, they don’t have names?) One of the many pirates that features in the movie happens to be…Bruce Spence as Cookson.

A strange thing about this ‘Peter Pan’ movie though. Apparently, Peter’s feelings and presence can affect the weather in Neverland. This is when the Jolly Roger gets unfrozen from ice upon his return and when he’s upset about Tinker Bell’s death, summoning everyone everywhere to believe in fairies. That was most weird! 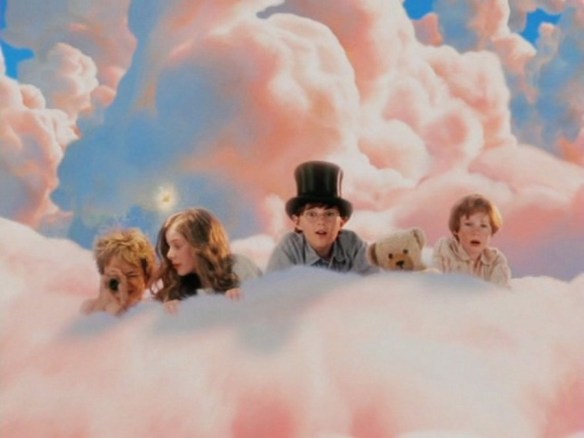 I’m not sure if that was in the original ‘Peter Pan’ book and play, but seeing that scene where people shout “I do believe in fairies!” once Peter is summoning willpower to bring Wendy back to life seems ludicrous. This is especially when it’s not just in Neverland but is also in England with kids and adults.

Was the scene worth it though?

(giggles) Yeah it totally was. 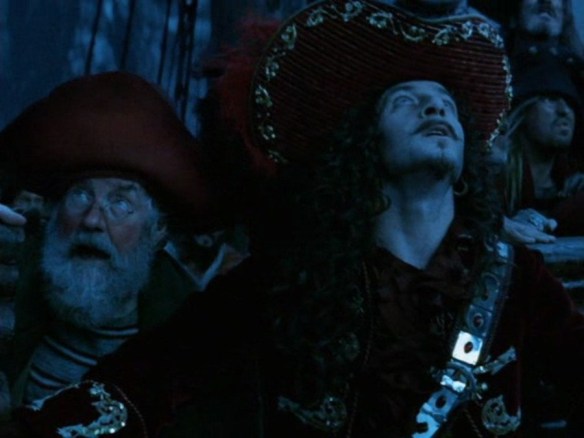 I’ve also noticed there being a ‘Pirates of the Caribbean’ atmosphere with this movie as well as perhaps a ‘Lord of the Rings’ one. This is especially regarding Captain Hook and the pirates. It was also disturbing to see how mermaids were depicted as vicious compared to the Disney film and in ‘Hook’.

The music composed by James Newton Howard for the movie is absolutely splendid. I especially like the flying in the sky music with Peter Pan, Wendy, John and Michael flying to Neverland in the movie as well as during the end credits. I liked the music so much that I even have it on a music CD to hear. 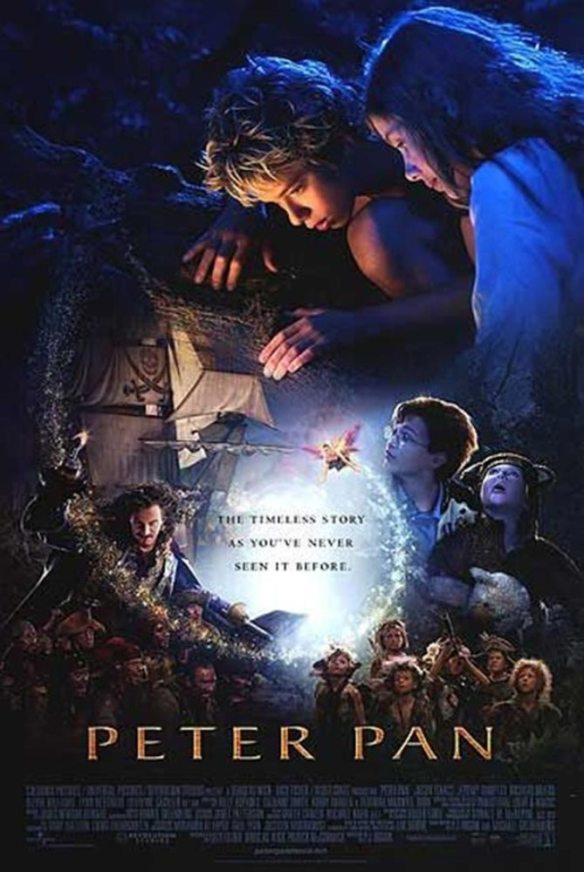 The 2003 ‘Peter Pan’ movie is still as good as I remember it today! It may have been forgotten lately, but I consider it to be a well-made film adaptation of J.M. Barrie’s story about a boy who never wanted to grow up and has adventures with Wendy, John, Michael and the Lost Boys against Captain Hook. 🙂

The performances of the cast especially Jeremy Sumpter, Rachel Hurd-Wood, Jason Isaacs and Richard Briers are stupendous. Everyone is into their characters when starring in this film. The direction is very well-done by P. J. Hogan. I hope it won’t be too long before I see the 2003 ‘Peter Pan’ movie again on DVD.