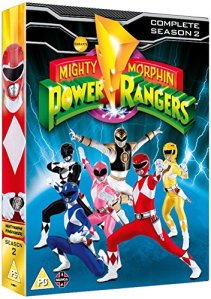 ‘PUTTY ON THE BRAIN’ (MMPR)

This ‘Power Rangers’ episode is actually pretty good. It has Billy and Zack seeing their four other friends Jason, Tommy, Kimberly and Trini as Putties when Lord Zedd puts a spell on them with their new lab sunglasses. The team needs to work together in order to defeat Zedd’s brand-new monster, Saliguana.

It was tense when Billy and Zack became afraid at seeing their friends Jason, Tommy, Kimberly and Trini during school hours. I wondered how the spell would be broken and whether Billy and Zack would realise a spell had been put on them. Thankfully they do realise it and it seems to work out in the end.

There’s then a fight with some real Putties in the park and Zack and Billy get confused when they see the other Rangers as Putties too. Fortunately Zordon contacts the Rangers and they teleport to the Command Center to discover the truth. I like how the Rangers work together to get rid of Zedd’s spell.

Zordon also warns the Rangers about the new monster Saliguana who can live and breathe fire. Billy and Zack work together to find a way to cool Saliguana down as they go to Billy’s lab to create an ice device. Alpha also comes up with a way to partially remove some of Zack and Billy’s vision in the story.

I liked it when the Rangers manage to defeat Saliguana with their Power Blaster and their Thunderzords in giant mode which forms into the new Thunderzord Assault Team before becoming the Thunder Megazord. Zack and Billy eventually have their vision repaired and see their friends again.