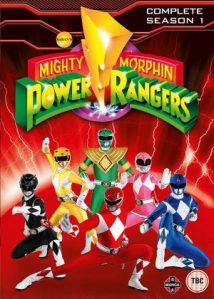 ‘THE TROUBLE WITH SHELLSHOCK’ (MMPR)

This is the first ‘Power Rangers’ episode where Tommy/Green Ranger is established as one of the team, following ‘Green With Evil’. It was good to see Tommy with Jason, Kimberly, Zach, Trini and Billy whilst they’re playing basketball that establishes the friendship and camaraderie between them.

Meanwhile, Squatt and Baboo attempt to prove their efforts to Rita Repulsa by creating their own deadly monster to destroy the Power Rangers. This monster ends up being Shellshock. This is a turtle with an array of objects such as a baseball and a bat, a hook, a cannon, traffic lights on his head, etc.

Shellshock gets sent into to attack Jason, Kimberly, Zach, Trini and Billy whilst Tommy is away for a karate class. Shellshock uses his green ray to freeze Kimberly, Zach and Billy on the spot as well as to make Trini run without stopping. Jason manages to evade Shellshock’s attack before he disappears.

Jason brings Kimberly, Zach and Billy back to the Command Center to ask for Zordon and Alpha’s help. Zordon says that a Deandra flower can reverse the effects of Shellshock’s power over them. He sends Trini to find the flower at the Mountain of Hope. I assume the mountain is on the planet Earth.

Also, it seems that Trini is able to control her body while running in her Yellow Ranger outfit but not stop her body running. I wonder how challenging that must have been for Trini when running to the Mountain of Hope (must be in Angel Grove). Thankfully, Trini manages to get the flower she needs.

Trini uses the flower to reverse the effects of Shellshock’s powers over her frozen friends as well as herself. This also allows Jason and Tommy the chance to defeat Shellshock at the end of the episode. Jason uses the Red Tyrannosaurus Dinozord whilst Tommy uses his Green Dragonzord to defeat him.

‘The Trouble with Shellshock’ is another enjoyable ‘Power Rangers’ episode with new team of six heroes following ‘Green With Evil’. It’s interesting the Rangers never used the fully assembled Dino Megazord to defeat Shellshock and intriguing when Trini’s Sabre-Toothed Tiger Dinozord helps her.