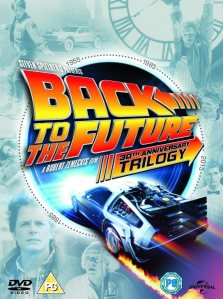 ‘BACK TO THE FUTURE, PART II’

The second ‘Back to the Future’ is my favourite of the trilogy. It’s a clever film about how Marty and Doc discover history being altered and have to put things right so that their version of 1985 is back.

In this movie, Doc takes Marty and Jennifer (his girlfriend) to the year 2015. Marty has to save his son from being framed. But Biff steals the time machine and changes history of his own purposes.

This film is probably the most complex and extraordinary I’ve ever seen. The messages of changing history are so strong in this film and Marty suffers the consequences of his actions when it happens.

It’s very clever writing and directing on Robert Zemeckis and Bob Gale’s part. It gets even cleverer when as well as visiting 2015, we revisit 1955 and scenes from the first ‘Back to the Future’ film.

The plot of the film involves a sports statistics book that Marty purchases from 2015 which Biff steals to change the past for him. Marty and Doc have to get that book back from Biff to stop it happening.

I really like the 2015 future scenes in this movie. Our 2015 is not like the one seen in this film unfortunately. We don’t have any flying cars today and I’m waiting for my hover board to ride on.

Michael J. Fox is great as Marty McFly in this movie. I like it when Marty is amazed at seeing the future in 1985 and when he’s horrified at seeing 1985 changed and that his father George is dead.

Fox not only gets to play Marty in this movie, but three other characters as well. He plays Marty as an older man; his son Marty McFly Jr and his daughter Marlene. That’s a lot of Michael J. Fox’s here.

Christopher Lloyd is great as Doc Brown in this movie. I like it mad scientist manner, especially when explaining to Marty the consequences of changing history and the importance of setting it right.

Lea Thompson returns as Lorraine, Marty’s mom in this movie. As well the 1955 version of Lorraine, there’s also Grandma Lorraine in 1985 and an alternative 1985 Lorraine married to Biff who is so big.

Thomas F. Wilson returns as Biff. Biff becomes more of a personal threat to Marty in this movie. We see three versions of Biff including the 1955 one; the alternative 1985 one and the old man in 2015.

Wilson also plays Griff, Biff’s grandson in this movie. Griff is a mad gang leader in 2015 who likes to use a baseball bat to knock people out like Marty. Griff and his gang get framed at some point here.

It was nice to see scenes repeated from ‘Back to the Future’ in this movie when Marty tries to get the sports book back from Biff. It keeps the whole thing consistent throughout this movie definitely.

The DVD special features are as follows. There’s the ‘Back to the Future, Part II’ featurette and ‘Making the Trilogy: Chapter 2’ documentary.

There are also outtakes; deleted scenes and a Hover Board test. There are also storyboard to final feature comparisons; production archives and a trailer.

‘Back to the Future, Part II’ is an exciting and engaging instalment in this trilogy. It’s my favourite out of the three and is gripping to see how Marty and Doc save history together. What will happen next?

At the end, Marty returns to the Doc in 1955 saying he’s back from the future. The Doc then faints…