Inside The Book – The Boy With The Golden Star 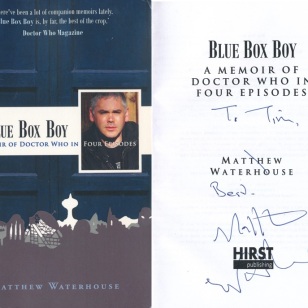 Tim Bradley has decided to write this review in the third person.

‘Regenerations 2011’ was the first time Tim had met Matthew. Tim asked if he could buy the book from Matthew and Matthew said yes. Matthew signed the book for Tim as well. Tim enjoyed meeting Matthew at that convention for the very first time and eventually had a photo shoot session with him.

Tim chatted with Matthew about his book and enjoying all his adventures from the TV series from ‘Full Circle’ to ‘Earthshock’. Tim also asked Matthew whether he’d be doing some Big Finish audios in ‘Doctor Who’ with Peter Davison, Sarah Sutton and Janet Fielding. This did not occur during that time.

Thankfully nowadays, Matthew has done a number of Big Finish audios of ‘Doctor Who’ with Peter, Sarah and Janet. This includes ‘Pyschodrome’, ‘The Star Men’, ‘The Contingency Club’, ‘Zaltys’, ‘Iterations of I’, etc. Tim is happy about this, thinking he’s partly responsible changing Matthew’s mind.

Adric is a ‘Doctor Who’ character not well-liked by fans. Tim has sympathy for Adric since he enjoyed his adventures in the TV series and felt he was badly treated by writers. Tim became aware of this autobiography by Matthew on his experiences in ‘Doctor Who’. He was intrigued to have a read of them.

Tim was glad when he met Matthew, got to buy the book and get it signed by him at the same time. It took a while for Tim to read Matthew’s book. But eventually he read it during the middle of 2013 where he had a chance to read each episode of the book over some months. He found it very engaging.

Published in 2010, Matthew has written his book in four episodic parts. This matches to the four-episode structure done in ‘Doctor Who’ stories during the classic days which is really nice. The episode titles are: ‘An Unearthly Child’; ‘Technocothaca!’; ‘Forth To Doomsday’ and ‘Survival’. Very catchy too!

Matthew covers his experiences of ‘Doctor Who’ from working with both Tom Baker and Peter Davison in the TV series. Interestingly and rather strangely, Matthew has written this book in the third person. One wonders why he didn’t write it in the first person. It’s a bizarre and odd approach to write a book.

Writing it in the third person makes Matthew rather detached as if he’s not part of the story personally. It must have been challenging for him to write all of the book by simply referring to himself as Matthew. Tim has his troubles writing in this review on Matthew’s book in the third person already.

Matthew has written a number of novels for Hirst Books in the USA, so he has a knack of writing such prose in that style already. But it’s an interesting approach to write an autobiographical account in the same manner. It’s unique, but Tim would have preferred it Matthew wrote the book in the first person.

The four episodes of this autobiography are well-structured. Firstly there’s a prologue where we have Matthew auditioning for Adric and producer John Nathan-Turner telling him with a friendly wink he’ll let him know soon enough. This is a really interesting way to hook the audience into Matthew’s world.

In the first episode, Matthew depicts his early years as a ‘Doctor Who’ fan to becoming cast as Adric in the TV series. Tim found this part of the book very interesting and enjoyable to read. Matthew fondly recounts how he became a fan of the series at an early age, reading the first three Target novels.

Matthew also talks about reading ‘Doctor Who’ comics and how he created his own called ‘Kroton Comics’. Tim has tried to find these comics online, but sadly they’re out of print. 😀 Matthew also goes into talking about his love of music and Kate Bush. It was fun for Tim to read these nostalgic memories.

Towards the end of the episode, Matthew recounts getting an office job at the BBC before getting cast in the public school boys’ serial ‘To Serve All My Days’. Tim especially felt he could relate to Matthew having fond memories being this young fan. This was a pretty friendly part of the book for Tim to read.

Tim didn’t know Matthew very well as much as he knew Sarah Sutton. So it came as a surprise to Tim when he found out Matthew was gay. Initially he assumed Matthew wasn’t gay which goes to show how naïve Tim is. He had to adjust, but this was a really interesting side of Matthew for Tim to discover.

The second episode chronicles Matthew’s experiences of working with Tom Baker and Lalla Ward in the TV series. This is probably bound to be the episode that will arouse readers’ interests. Matthew goes into length on how he considered Tom to be one of his heroes, watching the TV series back then.

This leads to how Matthew’s preconceptions of Tom were shattered when he worked with him. Matthew depicts his naivety and how uncomfortable he felt when Tom was in foul moods and having arguments with Lalla during the making of the TV series. Tim really felt for Matthew during that period.

From reading this book, Tim also felt Matthew should have left things unsaid including Tom’s tantrums and being drunk from going to the pub. Matthew also reveals his discomfort in working with Lalla Ward. He talks about how sometimes there was friction between the two when working on the series.

But at least Matthew is being honest in his memoirs and does give a balanced view on both Tom Baker and Lalla Ward as actors. By the way, this book contains some strong language where it concerns Tom Baker and anyone else using foul language in this story. The author is no exception for this book either.

Matthew does go on about being intimated by Janet during the TV series and mentions her smoking habits. But at least Matthew says nice things about Sarah in the book. Tim liked it when Matthew tells the tale of when he, Sarah and Janet had a ride in Peter’s brand-new car who drove it into the country.

The drive in the country anecdote with Matthew, Sarah, Janet and Peter is an example of the camaraderie shared between these four. Matthew also shares his working experiences with actors such as Phillip Locke, Michael Robbins, Richard Todd and Simon Rouse. Some are good; some are not.

Matthew also gives his account of the ‘drinking too much’ incident during the location filming of ‘Castrovalva’. It’s interesting how Matthew recounts this incident from his point of view and you feel sympathy for him as he writes it in the book. Tim could feel for Matthew in the embarrassing situation.

The fourth and final episode of this book has Matthew recount what life was like after working on ‘Doctor Who’. He talks about the conventions he attended and doing karaoke/cabaret with Jon Pertwee in the 1980s and 1990s. This would have been the conventions that were held a lot in the USA.

Matthew also talks about the DVD commentaries he’d recorded with Peter, Sarah and Janet. Tim liked it when Matthew talked about Sarah sitting in her garden and drinking a glass of white wine. This is something Tim can imagine Sarah doing in her life. Tim wishes that he sat with Sarah in her garden. 😀

What was most fascinating for Tim to read in this episode was how Matthew continued watching ‘Doctor Who’ until the end of its classic run in 1989. He didn’t watch ‘Doctor Who’ when the new series came back in 2005. It was when he had chanced upon a new series episode called ‘Planet of the Dead’.

Tim had asked Matthew if he was still a fan of the TV series when he first met him in Swansea. He said he was. Not much is talked about any other work Matthew did in the theatre. If there was, Tim couldn’t spot it. Matthew does talk about writing his books in the USA which was so interesting for Tim to read.

There is an audiobook provided for ‘Blue Box Boy’ and is read by Matthew Waterhouse. But Tim didn’t purchase the audiobook to listen to the background whilst reading the book because it was an abridged version. Tim would have preferred an audiobook to cover the entire book from start to finish.

Tim has enjoyed reading these memoirs of ‘Doctor Who’ by Matthew Waterhouse in four episodes. ‘Blue Box Boy’ is an insightful and intriguing read. It’s full of nostalgia and memories by Matthew recollecting his time working on the TV series. There should have been things left unsaid by Matthew.

But Tim enjoyed learning more about this young boy fan who wanted to be in the TV show he loved so much. Tim wonders whether Matthew hopes to adapt his book into a TV serial since he wrote his memories in four episodes. This could be something on the lines of ‘An Adventure In Space and Time’.

This is great book chronicling Matthew’s life as the Blue Box Boy.

Tim Bradley now wants to read an autobiography by Sarah Sutton next! 😀