I found ‘The Dalek Invasion of Earth’ rather dull and boring when I saw it on DVD. This movie is a full-on action-packed adventure and it has stood the test of time considering this was made in the year 1966.

Peter Cushing returns as Dr. Who with his granddaughter Roberta Tovey as Susan. They’re also joined by Jill Curzon as Louise, the Doctor’s niece Louise, who I’ve seen in ‘The Saint’ 1960s TV series. 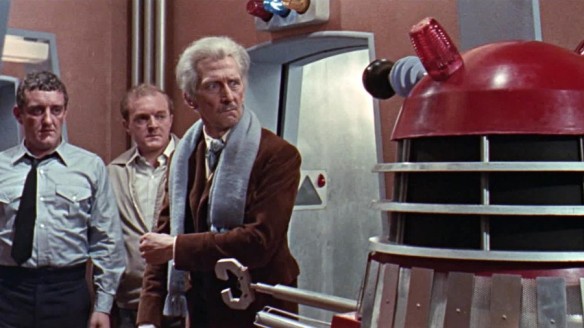 There’s also Bernard Cribbins as policeman Tom Campbell who walks into the TARDIS by mistake. For me, Bernard would later play Mr. Hutchinson in the ‘Fawlty Towers’ episode, ‘The Hotel Inspectors’.

For many ‘Doctor Who’ fans, Bernard Cribbins would play Wilfred Mott, Donna’s granddad in the new series. Bernard essentially plays the ‘Ian’ role in the movie whilst Jill Curzon plays the ‘Barbara’ role.

The movie features Ray Brooks as freedom fighter David who’s brave, heroic and ‘the boy with the knack’. There’s also Andrew Kier as rough but good-hearted Wyler sharing an adventure with Susan.

There’s Philip Madoc (who played the U-Boat Captain in the ‘Dad’s Army’ episode ‘The Deadly Attachment’ and many ‘Doctor Who’ foes) as black-market spiff Brockley. He’s a nasty piece of work.

I enjoyed Philip Madoc’s scenes in the movie where he tricks Peter Cushing’s Doctor to being caught by the Daleks. He then finds himself getting blown up in a house once the Daleks open fire upon it.

I’m very impressed with the Robomen in this. They’re far superior and better than the ones in the TV story. The Robomen are more like soldiers than slaves to the Daleks and do look good in helmets.

I found it funny when Bernard Cribbins as Tom gets dressed up as a Roboman and he has to fit in with the Robomen squad taking a break and having something to eat. It was a pretty amusing scene.

The spectacular Dalek spaceship scenes where it flies in the air are truly sensational. They’ve stood the test of time over the years and it all feels very 1960s style whenever I’m watching this Dalek film.

Sadly, this film didn’t get as much success as the first Dalek film. Thus the Peter Cushing reign of ‘Doctor Who’ ended with no further Dalek films to be made for the cinema, which is a real shame.

I’m sure the producers would’ve had a hard task tackling ‘The Daleks’ Master Plan’ into a movie. They would need to divide the story up into two movies like ‘Harry Potter and the Deathly Hallows’.

Perhaps Big Finish will one day approach this movie series and reinvent it somehow. Perhaps Roberta Tovey, Jill Curzon, Jennie Linden and Bernard Cribbins can have a reunion through the Dalek films.

So it wasn’t meant to be for the Daleks to have a long lasting list of appearances on the big screen. But the two Dalek movies are treasures to enjoy, especially for a dedicated ‘Doctor Who’ fan like me.

The DVD special features are as follows. There’s a documentary called ‘Dalekmania’ that focuses on the making of the two Dalek films. This includes behind-the-scenes interviews with cast and crew.

The two Peter Cushing films of ‘Doctor Who’ are a joy to watch. It’s rather sad Cushing’s Doctor doesn’t get mentioned a lot in ‘Doctor Who’ terms, but I’ve enjoyed the Dalek films he has starred in.