‘DR. WHO AND THE DALEKS’

Daleks on the Big Screen

Most exciting! – The Peter Cushing era of ‘Doctor Who’!

This era featured two ‘Doctor Who’ movies that were shown in the 1960s. They featured the Daleks! The movies were fuelled by the Dalekmania that was happening at the time. The public were excited by these popular pepper pots when they invaded with their catchphrases of “Exterminate!!!”

When I originally wrote this review, I assumed the Dalek movies existed in an alternative continuity or a parallel universe that was completely separate from the prime ‘Doctor Who’ universe we know and love today. Steven Moffat changed that when he penned ‘The Day of the Doctor’ novelization in 2018. 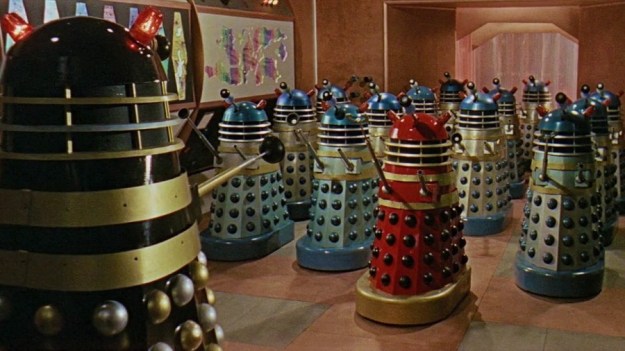 Apparently the Dalek movies do exist in the main continuity as they’re just considered as movies that I assume were pitched by the Tenth and Eleventh Doctors. That is unusual I grant you, but you don’t need to take these Dalek movies too seriously. These are movies meant to be enjoyed with the Daleks.

My parents purchased the DVD collection of these movies when I getting into ‘Doctor Who’ in 2007. I didn’t really pay much attention to these films and wasn’t too keen on watching them. But once I got into watching these films, I enjoyed them a lot first time with the Daleks and Peter Cushing’s Doctor.

The movies are adaptions of the first two ‘Doctor Who’ stories with the Daleks. They were produced by Milton Subotsky and Max J. Rosenberg of Amicus Productions. Milton Subotsky wrote the screenplay for both films with help from David Whitaker, the very first script editor of ‘Doctor Who’.

Both movies are based on Terry Nation’s TV scripts for the first two Dalek stories. They were both directed by Gordon Flemying, who would go on to work on some of the popular TV shows during the 1960s including ‘The Saint’ and ‘The Avengers’. This gets clearly shown in the action-adventure style.

The first movie is based on the first Dalek story, ‘The Daleks’. It stars Peter Cushing as Dr. Who with his companions: Roy Castle as Ian Chesterton, Jennie Linden as Barbara and Robert Tovey as Susan.

There are differences between the films and TV series. One notable difference is that Peter Cushing’s Doctor is not a Time Lord. He is simply a human scientist who built the TARDIS and is called Dr. Who.

The TARDIS interior also looks different from the TV version, as it’s a jumble of controls sprawled all over the place. It’s unfamiliar to the TARDIS hexagonal console we all know. It is fantasy, but it is fun.

Peter Cushing as Dr. Who is very unlike William Hartnell. Cushing’s Doctor is more gentlemanly, elderly and rather sweet and gentle-hearted. Not like the fiery spirit of the Doctor that we all know.

But seeing Peter Cushing as Dr. Who was a delight. He has a certain eccentricity and is really into his scientific inventions like the TARDIS. He gets on well with his granddaughter Susan who is a little girl.

Roy Castle stars as Ian Chesterton, Barbara’s boyfriend in the film. Roy is known for his appearances in the ‘Carry On’ films. He has also narrated many Scripture Union children videos that I used to watch.

In the movie, Ian is a clumsy and bumbling sort of chap unlike his TV counterpart. It was Ian who started off the adventure by accidentally sitting on the red big lever, though that was Barbara’s fault.

I enjoyed Jennie Linden as Barbara. In the movie, Barbara is a sweet person and rather shy. She gets easily frightened when it comes to Daleks and being on the alien planet. But she’s quite resourceful.

My favourite scene in the film is where all the four characters discuss how to distract and immobilise a Dalek in their prison cell. Barbara throws mud at the Dalek’s eyestalk and is brave in facing danger.

Roberta Tovey stars as Susan, the Doctor’s youngest granddaughter and a little girl. She appeals for the children in the movie audiences watching this. I’m sure little Roberta had a lovely time as Susan.

Susan has inherited her grandfather’s spirit. She is quite mischievous and a bit of a know-all. She’s full of adventure and a joy to watch. I did enjoy seeing her scenes when in the TARDIS and facing the Daleks.

The Daleks are also fabulous to watch too. The movie Daleks look like the ones from the new ‘Doctor Who’ series with huge lights when they speak and having different colour schemes to identify them.

I love the Daleks ranging from black to red to blue and silver. They became the inspiration for the Daleks’ look in ‘Victory of the Daleks’, although those were awful. I find the movie Daleks a lot better.

I love those moments when the Daleks get into a state of panic. One Dalek gets caught by Dr. Who, Ian, Barbara and Susan in their trap and it rants and raves while our heroes attempt to immobilise it.

The cast also includes the Thals. There’s Barry Ingham as Alydon, Michael Coles as Ganatus, Yvonne Antrobus as Dyoni and Geoffrey Toone as Temmosus. The Thals’ make-up looks so unusual in the film.

‘Dr. Who and the Daleks’ is my favourite Dalek movie with Peter Cushing’s Doctor. It’s a lot of fun; something to enjoy with the kids and isn’t to be taken too seriously with other ‘Doctor Who’ stories.

The movie has fine performances from a stunning stellar cast including Peter Cushing, Roy Castle, Jennie Linden and Robert Tovey. And of course the Daleks steal the show with their bright colours! 🙂 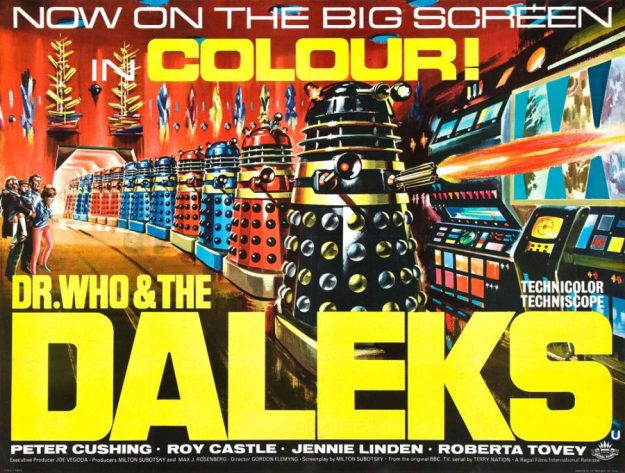 The DVD special features are as follows. There’s a commentary with Jennie Linden and Roberta Tovey, moderated by a Peter Cushing biographer.