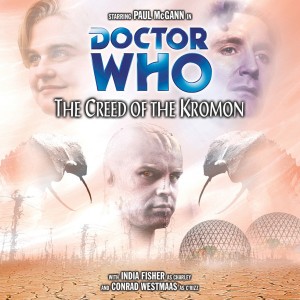 ‘THE CREED OF THE KROMON’

What will Charley and the Doctor find in the Divergent Universe?

The problem with setting up a new alternative universe like E-Space and the Divergent Universe in ‘Doctor Who’ is setting up its own rules in terms of how it physically works and how our characters can inhabit it. There’s also an issue in creating new worlds and how you travel from one to the other.

He also sets up a tone for what types of stories we’re to expect when venturing into the Divergent Universe. Many of the worlds that the Eighth Doctor and Charley visit aren’t always going to be pleasant and friendly. This is especially with the adventuring duo’s attempts to try and recover the TARDIS.

‘The Creed of the Kromon’ is Philip Martin’s first contribution to Big Finish. It isn’t the first time Philip’s written for ‘Doctor Who’ though, since he wrote ‘Vengeance on Varos’ and the ‘Mindwarp’ segment of ‘The Trial of a Time Lord’ on TV featuring Colin Baker’s Doctor. He later wrote more Big Finishes.

He adapted his lost TV story ‘Mission to Magnus’, which was first novelized for the Target range of ‘Doctor Who’ books and is now a Big Finish audio drama. He also wrote ‘Antidote to Oblivion’ with the Sixth Doctor and Flip. He later wrote the spin-off video drama ‘Sil and the Devil Seeds of Arodor’.

In many respects, ‘The Creed of the Kromon’ is quite a change from what Philip Martin usually does for ‘Doctor Who’. For one thing, he doesn’t include Sil into the story. He also writes for the Eighth Doctor as opposed to the Sixth Doctor for a change. I do wish Philip had written for more Doctors. 😀

There are echoes of previous Philip Martin ‘Doctor Who’ stories in ‘The Creed of the Kromon’, especially with the business organisational nature of the Kromon as an alien insectoid race and with Charley getting experimented upon and being mutated into an insect hybrid queen to carry the Kromon’s eggs.

Philip Martin seems to have a thing for doing terrible things to ‘Doctor Who’ companions like Peri becoming a bird creature in ‘Varos’ and getting killed to become Lord Kiv in ‘Mindwarp’ as well as Charley become a queen carrier for the Kromon. I do feel sorry for the companions in Philip’s stories. 😀

Speaking of companions, ‘The Creed of the Kromon’ introduces us to a brand-new companion who meets the Eighth Doctor and Charley upon entering his world of Eutermes. That new companion of course is the ‘often divided amongst ‘Doctor Who’ fans’ character C’rizz, played by Conrad Westmaas.

I’ll share more about C’rizz’s character later in this review as well reviews on upcoming stories in ‘The Divergent Universe’ season. The story begins with the Doctor and Charley exiting where they came from in ‘Scherzo’ as they’re about to enter the Eutermesan Zone ruled by the insectoid-like Kromon.

I’m not sure what the Kro’ka’s angle is by this point in the season, but he does seem to be conducting experiments on the Doctor and Charley as they go and visit various places within the Divergent Universe. Who is the Kro’ka working for, I wonder? It doesn’t seem to be very good news.

Once they enter the Eutermesan Zone, the Doctor and Charley find it a world full of dust and dying trees. There are bio-spheres that look like giant anthills. The Doctor hopes that inside one of these sphere-like structures is a clue that will lead him to his lost TARDIS. Is the Doctor correct about this?

The Doctor and Charley find C’rizz who has escaped from the Kromon and is trying to find his beloved L’da, played by Jane Hills. The Doctor, Charley and C’rizz get into trouble when the Kromon captures them and Charley is soon chosen to be their hybrid-insect queen for the Kromon offspring.

Paul McGann delivers another engaging performance as the Doctor in this audio adventure. I believe Paul’s Doctor has calmed down significantly since his fits of anger in ‘Zagreus’ and ‘Scherzo’. I’m sure he’s rattled about not having his TARDIS anymore, but he seems fascinated about this new universe.

The Doctor gets to know C’rizz, his world and what the Kromon have done to enslave the people who lived in it. Paul’s Doctor does become concerned for Charley when she’s about to be turned into a hybrid-insect queen. He also manages to outwit the Kromon when they construct a TARDIS. 🙂

India Fisher as Charley is equally good in this audio adventure. I feel sorry for Charley that she had to go through experimentation that was forced upon her by the Kromon. There are points where Charley’s become willing to be a hybrid-insect queen. But she manages to get through the hardship.

I’m intrigued about how Charley’s relationship with the Doctor stands at this point, especially after their declarations of love in the previous three stories, including ‘Neverland’, ‘Zagreus’ and ‘Scherzo’. Perhaps it won’t get mentioned again, but it’s amazing how Charley remains so loyal to the Doctor.

For his debut, Conrad Westmaas as C’rizz is very good. Conrad Westmaas was previously in ‘Zagreus’ playing a Cat. 😀 C’rizz is a chameleon-like character, as his skin colour can change compared to humans. He’s also bald. 😀 As a companion character so far, I found him fine and intriguing to listen to.

I can see why C’rizz would divide fan opinion in terms of a companion. He does have moments of goodness, but he can be quite cold at times, especially when he kills L’da at her request and when he says to the Doctor that killing Charley is the only way to save her. Maybe he’ll grow on me later on. 🙂

The Kromon are voiced by Daniel Hogarth and Stephen Perring. I’m not sure I can distinguish between certain characters, since most of them sound the same. They are business-like when our heroes interact with them. I would have liked them to have had a more militaristic approach in life. 🙂

There is a character in the story called the Oroog, played by Brian Cobby, who becomes a friend to the Doctor, Charley and C’rizz when they’re captured by the Kromon. The Oroog seems to be a fur-covered creature with big claws. He’s also benevolent when he helps the TARDIS heroes to triumph.

I wish the story’s ending was a bit more action-packed and we had the enslaved rebels fight against the Kromon. I’m sure there were more slaves oppressed by the Kromon in the bio-spheres. The climax’s focus was more on Charley being reset to human after being a hybrd-queen, which is a great relief. 🙂

The CD extras are as follows. There’s a ‘coming soon’ trailer for ‘The Natural History of Fear’ with Paul McGann, India Fisher and Conrad Westmaas and there’s a trailer for ‘Dalek Empire III’. 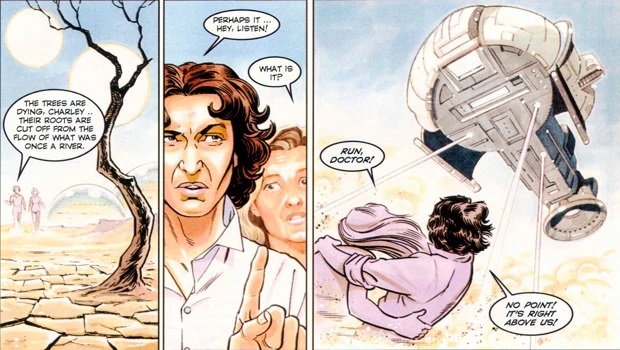 ‘The Creed of the Kromon’ is a good second instalment in ‘The Divergent Universe’ season. It’s intriguing how the Doctor and Charley discover the Eutermesan world and confront the insect-like Kromon. I also enjoyed how Conrad Westmaas as C’rizz gets introduced as the new ‘Doctor Who’ companion. 🙂

I’m wondering what new adventures lie ahead for the Doctor, Charley and C’rizz, as they enter from one zone into the next on whatever world they seem to be on in the Divergent Universe. It doesn’t seem promising, especially with the malicious Kro’ka conducting experiments on the brand-new trio.

Will the Doctor ever find his TARDIS again?