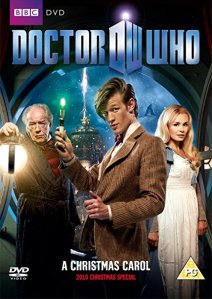 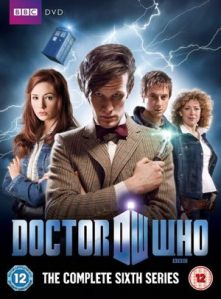 Well, that depends. It was well-received by critics when it was shown on TV. And I must admit, it was pretty enjoyable and interesting to watch as a fan. But speaking personally, it doesn’t match the quality of the ‘Doctor Who’ Christmas Specials that were transmitted under the Russell T. Davies era.

There were many complex aspects to the story that need to be focused on in order to be taken seriously. If you’re able to suspend your disbelief in how it parallels to the actual ‘Christmas Carol’ story by Charles Dickens, then you can’t go wrong with this one. It all depends on your certain tastes.

I recall seeing the trailers and the build-up to the Special when I was watching TV over Christmas 2010. I was looking forward to seeing how Matt Smith’s Doctor’s first Christmas would turn out and seeing Michael Gambon and Katherine Jenkins in it. I hoped it would restore my faith in the TV show.

The episode begins with Amy and Rory on a space liner during their honeymoon. Why Amy is in her policewoman outfit and Rory in his Roman outfit seems vague. The space liner is about to crash-land when it’s losing control, passing through some electrified clouds over a human-inhabited planet.

Amy sends a distress call to the Doctor in order to rescue her, Rory and everyone else aboard the space liner. The Doctor responds, but can’t use the TARDIS to save the ship. He instead goes to the planet to find the source of the electrified clouds, which is a spire in the centre of a pretty large city.

Now, let me talk about the human-inhabited planet itself and the people living there. In the episode, we have a Dickensian society using electricity. This is something that Steven Moffat likes to use in his ‘Doctor Who’ stories, where he has them in period settings but adds on certain futuristic aspects. 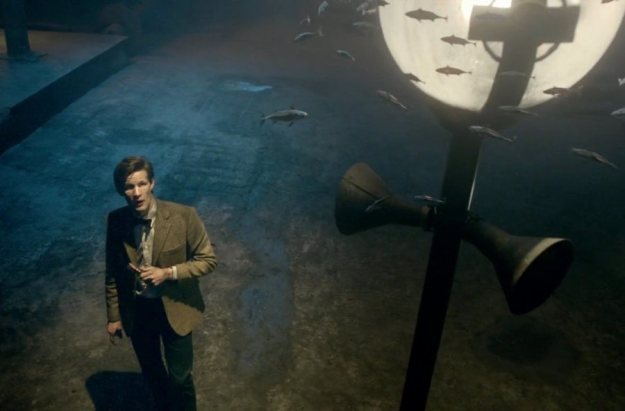 There’s also the addition of fish swimming through the atmosphere of this planet instead of swimming through water. This is admittedly a bizarre aspect to the world that Steven Moffat has created for us to enjoy. But if you can believe it’s an alien world in ‘Doctor Who’, then you are okay.

Meanwhile, the Doctor meets the man who is in control of the electrified clouds of this human-inhabited world. The man happens to be Kazran Sardick. Kazran is a bitter old man who refuses to operate the isomorphic controls to deactivate the spire as well as allow the space liner to land safely.

Michael Gambon guest stars as Kazran Sardick, who I’m sure you know is the Scrooge of this ‘Doctor Who’ take of ‘A Christmas Carol’. I’ve seen Michael Gambon in many dramas such as ‘Wives and Daughters’ and of course he’s well-known for playing Dumbledore in the ‘Harry Potter’ movie series.

It’s interesting to see how Kazran develops as a character and how the Doctor changes him by rewriting his own personal history in the style of ‘A Christmas Carol’. Kazran gets memories that he never had, as the Doctor goes back in time when he meets him as a boy and changes him to be nicer.

Now, there’s something I find debatable in ‘Doctor Who’ these days and it’s something Steven Moffat enjoys doing. The Doctor rewrites history. Now I would object to that, since the Doctor’s a Time Lord and he’s not supposed to change history but to observe it. It doesn’t seem to apply here.

And don’t get me wrong. I know he’s doing it in order to save Amy, Rory and 4003 passengers aboard a space liner. But it makes it very confusing when the Doctor’s changing the life of a man who never had these past memories. It’s only until the Doctor came that Kazran is remembering them. 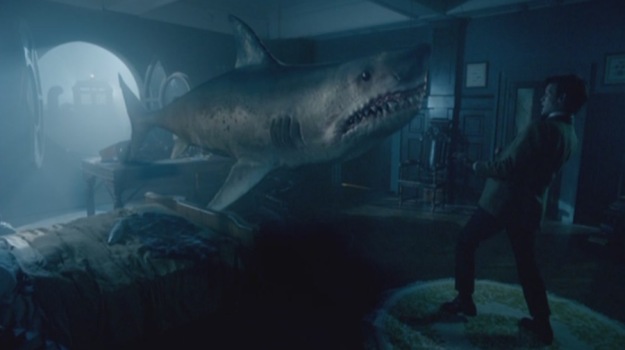 I suppose if you want to argue the case that if it happened in ‘Back to the Future’ with Marty McFly changing his family from 1955 to 1985, the case could also apply here. But with Marty, those changes to his family happened unintentionally. With this one, the Doctor rewrites time deliberately.

Anyway, exploring Kazran’s past, present and future in the episode was interesting to watch. In the past, the Doctor meets Kazran as a boy, played by Laurence Belcher. Kazran has wanted to see fish at Christmas time. But his cruel father (also played by Michael Gambon) forbade him to see these fish.

Karzan gets to experience a new aspect of his life seeing fish with the Doctor showing up. It starts off with a small fish before it turns into a giant shark. Oh and the shark eats half of the Doctor’s sonic screwdriver in the process. This is where it gets too crazy when fish and sharks come into the tale. 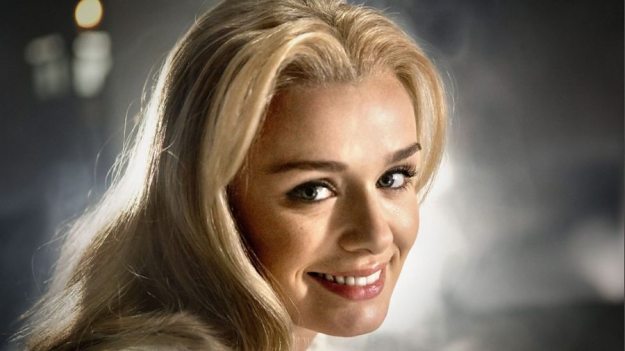 I was surprised that Katherine Jenkins was performing in this episode, as I thought she was just a singer. It turns out that this ‘Doctor Who’ episode is Katherine Jenkins’ first major acting appearance. And surprisingly, Katherine delivers a great performance as the actress and the singer.

It’s interesting to note that Katherine has this lovely, light-hearted voice when she’s acting and this deeper, operatic voice when she’s singing. I can’t explain how these two can belong to the same person, as they’re both very distinctive. But it’s intriguing how both voices are used to drive the story forward.

Eventually, as the Doctor and Karzan visit Abigail every Christmas, Karzan grows up to be a young man, played by Danny Horn. You begin to see a romantic love story developed between Karzan and Abigail at this stage of the story. This was intriguing and it develops why Karzan becomes who he’ll be.

As Karzan and Abigail fall in love with each other, it soon transpires that Abigail has one day of life left from her cryogenic chamber. This pushes Karzan into why he becomes bitter and old as he would later be as Michael Gambon. He refuses to rejoin the Doctor when going to see Abigail again. 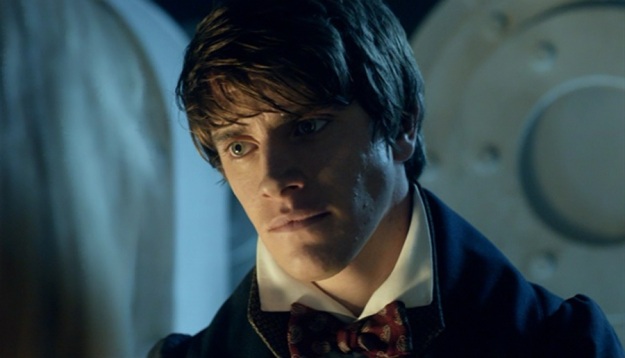 Again, this leads me to another point of debate. Why didn’t Karzan tell the Doctor that Abigail was on her last day of life? I mean it’s an interesting character point in the episode, but I wonder why Karzan didn’t trust the Doctor enough to reveal to him why he didn’t want to see Abigail ever again.

Eventually we come to the ‘present’ part of the story, as Karen Gillan as Amy and Arthur Darvill as Rory attempt to show Karzan what’s happening aboard the space liner. I do think that the ‘present’ portion of the story gets focused on too quickly as most of the episode focuses on the ‘past’ portion.

It seems to be the case for the ‘future’ portion, when the Doctor presents Karzan his future. And by that, I mean bringing Laurence Belcher forward into the future to see himself as Michael Gambon. Now this would be a pretty clever and neat concept by Steven Moffat, if it wasn’t for one vital thing. 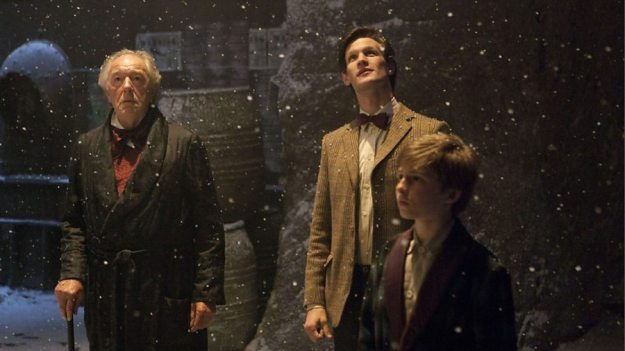 The Blinovitch Limitation Effect! Yeah! Somehow that gets ignored in this ‘Doctor Who’ episode. If two Brigadiers from ‘Mawdryn Undead’ touching each other caused an explosion, why didn’t this apply to two Karzans? It seems that the rules in ‘Doctor Who’ set up years before are ignored here.

The episode concludes with old Karzan reunited with Abigail. There’s also Abigail singing the song written especially for Katherine Jenkins called ‘Abigail’s Song’ to save Amy and Rory on the space liner. This is by contacting the shark with half of the Doctor’s sonic screwdriver to disrupt the storm.

The DVD special features are as follows. On the ‘A Christmas Carol’ DVD, there’s the ‘Doctor Who Confidential’ making-of documentary on ‘A Christmas Carol’. This includes behind-the-scenes interviews with the cast and crew including Matt Smith, Michael Gambon, Katherine Jenkins, etc. There’s also ‘Doctor Who at the Proms 2010’, which was a concert performed in July 2010. This features music from Series 5 of ‘Doctor Who’ with Matt Smith. Strangely, this DVD special feature isn’t included in ‘The Complete Series 6’ DVD box set of ‘Doctor Who’. Why that’s the case, I have no idea.

On Disc 1 of ‘The Complete Series 6’ of ‘Doctor Who’, the ‘Doctor Who Confidential’ making-of documentary on ‘A Christmas Carol’ can be found there. There’s also the two-part Comic Relief story, ‘Space’/‘Time’ with Matt Smith as the Doctor, Karen Gillan as Amy and Arthur Darvill as Rory. 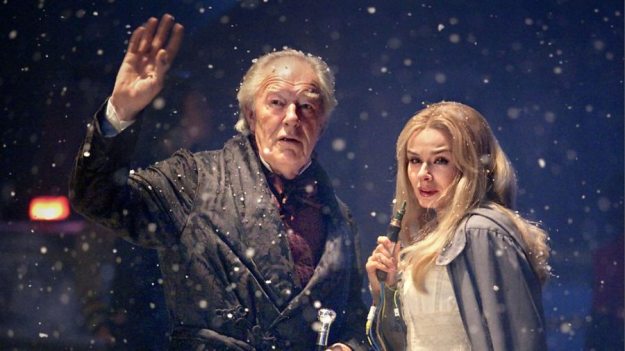 The episode itself is pretty inventive and there are times when you have to suspend your disbelief for the alien human-like world it seems to be set in. I think it’s safe to say that ‘A Christmas Carol’ is the strongest out of the Christmas Specials done in Steven Moffat’s era compared to the later ones.