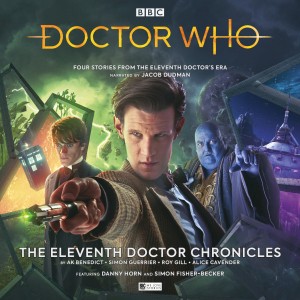 The third story of ‘The Eleventh Doctor Chronicles’ is called ‘The Light Keepers’ by Roy Gill. This is the first time I’ve come across Roy Gill as a ‘Doctor Who’ writer’. I did find this adventure to be good.

I have seen Simon Fisher-Becker in real-life at conventions. I first saw him at the ‘Big Blue Box 2’ convention in March 2013 and first met him at the ‘Stars of Time Film and Comic Con’ in May 2016.

I had a pleasant encounter with Simon Fisher-Becker and wondered if he would ever reprise his role of Dorium Maldovar in ‘Doctor Who’. I had no idea he would return to play him in a Big Finish audio.

‘The Light Keepers’ is an enjoyable instalment in ‘The Eleventh Doctor Chronicles’ as the Time Lord crashes into Dorium’s life again at the Maldorvarium. And I mean…the TARDIS literally crashes in. 😀

It was fun to have an adventure set inside the Maldorvarium where Dorium controls his little empire of commerce as depicted in the TV show. The story allows us to discover more of the Maldorvarium.

Dorium isn’t too happy when the Doctor crashes his TARDIS through the ceiling of the Maldorvarium. He raises the credit price pretty high for the damage caused. I must say, that’s pretty cruel.

It’s interesting how the Eleventh Doctor and Dorium interact with each other in this audio adventure. This all takes place before the Doctor recruits him for help in ‘A Good Man Goes To War’.

It’s also interesting that Dorium knows who the Eleventh Doctor is already. This isn’t the first time he’s met him. It should also be noted that Dorium has met another earlier incarnation of the Doctor.

That was when Dorium met the War Doctor in ‘The Many Lives of Doctor Who’. But that’s another story. 😀 Anyway, Dorium knows who Eleven is; pounds his TARDIS to the ground and asks for his help.

Apparently Dorium is having a problem with some group of scavengers called the ‘Beacon People’…also known as the Light Keepers. They are currently digging for minerals in his shuttle park.

Dorium isn’t happy with what’s going on and asks the Doctor to help him find out what these scavengers are doing in their lighthouse. The Doctor reluctantly agrees to this to get his TARDIS back.

The interaction between Dorium and the Eleventh Doctor in this audio adventure is splendid. Jacob Dudman’s voice for Matt Smith’s Doctor is spot on and again it sounds like the Doctor is in the room.

Even Simon Fisher-Becker was impressed by Jacob Dudman’s voice for Matt Smith’s Doctor, according to the CD extras. I could easily visualise Matt Smith speaking to Dorium in this adventure.

The Doctor and Dorium come up against some foes that our Time Lord hero has faced before. The story features the Lux, a race of aliens that have featured before in the ‘Tales of New Earth’ CD box set.

Jacob Dudman and Simon Fisher-Becker in ‘The Light Keepers’.

‘The Light Keepers’ has been an enjoyable adventure to listen to. I liked the interaction between the Eleventh Doctor and Dorium in this, as Jacob Dudman and Simon Fisher-Becker spark off each other.

The CD extras are as follows. There are behind-the-scenes interviews with Jacob Dudman and Simon Fisher-Becker, conducted by director Helen Goldwyn on ‘The Light Keepers’ which I enjoyed hearing.