Tribute for Matt Smith – Celebrating 50 Years of ‘Doctor Who’ 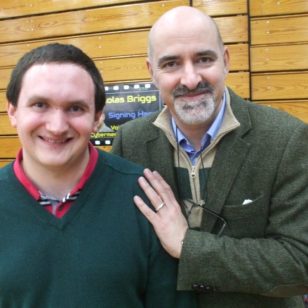 November 2013. It’s time to celebrate the Eleventh Doctor era of ‘Doctor Who’ with Matt Smith!

The 50th anniversary of ‘Doctor Who’ has come and gone! What a month November was! On TV, the fans of ‘Doctor Who’ had ‘The Day of the Doctor’; the ‘Doctor Who’ Live After Party on BBC Three and the brilliantly funny one-off spoof special by Peter Davison called ‘The Five(ish) Doctors Reboot’.

Most importantly, November was a month to celebrate the Eleventh Doctor era with Matt Smith. Matt’s era included a vast amount of spacey timey-wimey adventures such as ‘The Eleventh Hour’; ‘The Impossible Astronaut’/’Day of the Moon’; ‘The Bells of Saint John’ and ‘The Name of the Doctor’.

Matt Smith enchanted so many TV viewers with his unique alien-ness; his manner of dress – tweed jacket and bow tie (“Bow ties are cool!”); and his habit of eating fish fingers with custard. His era has also been cemented by his companions like Amy Pond; Rory William; River Song and Clara Oswald.

November 2013 concludes the ‘Destiny of the Doctor’ series, produced by Big Finish and AudioGo, with ‘The Time Machine’ by Matt Fitton. I enjoyed the ‘DOTD’ series to celebrate 50 years of ‘Doctor Who’. The ‘DOTD’ series; ‘The Light At The End’ and ‘The Five(ish) Doctors Reboot’ made the 50th anniversary for me.

As with previous stories in the ‘DOTD’ series (previously with ‘Death’s Deal’), this story is narrated and performed by an actor/actress who was in the TV series with a guest star as a supporting character. ‘The Time Machine’ is performed by Jenna Coleman who played Clara in the TV series and guest stars Michael Cochrane as Professor Chivers and Nicholas Briggs as the monstrous Creevix.

‘The Time Machine’ sees the Doctor visiting Oxford on the 23rd of November 2013 (‘the day of the Doctor’) after tracking a temporal anomaly from a time machine created by Professor Chivers with help from Alice. Soon, the monstrous Creevix arrive and the Doctor has to find a way to stop them.

I’ve met Matt Fitton at ‘Doctor Who’ conventions and have chatted to him about ‘The Time Machine’. I enjoyed sharing how much I enjoyed this last story of the ‘DOTD’ series. I asked questions on how he managed to weave so many threads from previous ‘DOTD’ stories in this story.

Jenna Coleman is absolutely lovely to listen to on audio. I was so thrilled to discover that she was going to read this final tale of the ‘DOTD’ series. She’s not playing Clara sadly, but she was lovely to listen to. Here she gets to play the Doctor as well as the Doctor’s one-off companion, Alice Watson.

I loved Jenna’s impersonation of Matt Smith’s Doctor in this adventure. Jenna gets it so right with the energy and strange weirdness of the character. It’s clear that she gets on with Matt in the TV series and she’s able to get a clear performance of the Doctor and her voice is clear when she reads.

Alice Watson is a young physicist who works for Professor Chivers on his time machine. Alice is what you would call a science nerd at Oxford University. She’s not one for socialising and doesn’t read any fiction or make jokes. But she gets to help the Doctor when they solve the mystery of the Creevix.

Michael Cochrane guest stars as Professor Chivers. Michael was in ‘Black Orchid’ with Peter Davison and ‘Ghost Light’ with Sylvester McCoy. He’s also appeared in a number of Big Finish audios. I’ve had the pleasure of meeting Michael at the ‘celebrate 50 – The Peter Davison Years’ convention in Chiswick, April 2013 and he’s such a gentleman.

Professor Chivers has been working on this time machine of his at Oxford University for the past eleven months with Alice. It’s revealed Chivers is actually Cedric (who the Doctor met in the first ‘DOTD’ audio adventure, ‘Hunters of Earth’ with Susan). I was amazed to find that Chivers was Cedric.

The monsters are the Creevix, voiced by Nicholas Briggs. The Creevix are giant insect-like creatures from another universe. They’ve come to change history with Chivers’ time machine; become the Masters of Time and destroy the Doctor. I found the Creevix’s monstrous voices creepy and chilling.

Now if you’ve been wondering what the point was with the Eleventh Doctor popping in and out of the previous ‘DOTD’ stories and sending messages to his previous selves, you’re going to have to find that out for yourself. I found it exciting. As Amy Pond would say, ‘this is where it gets complicated’.

I was very pleased when it was decided to use Murray Gold’s 2013 theme music of ‘Doctor Who’ for ‘The Time Machine’. It is right for the Eleventh Doctor and it closes the ‘DOTD’ series on a fitting note.

There aren’t any CD extras, apart from the Eleventh Doctor’s biography in the CD sleeve notes. If you purchase the complete ‘DOTD’ series as a bundle from Big Finish, there’s a behind-the-scenes making-of documentary on the series called ‘Meeting with Destiny’ with ‘The Time Machine’.

I’ve enjoyed all eleven stories of the ‘Destiny of the Doctor’ series. ‘The Time Machine’ is a fitting tribute to Matt Smith’s era of ‘Doctor Who’ and it’s wonderfully narrated by Jenna Coleman. You might want to listen to this a few times, but if you’ve heard the first ten stories of the series, you shouldn’t have a problem.

And the story goes on…forever and forever…