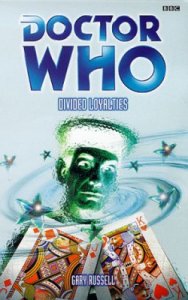 The Doctor, Nyssa, Tegan and Adric vs. the Celestial Toymaker

I’ve read this ‘Doctor Who’ book at last!

I’ve enjoyed reading ‘Divided Loyalties’! This is a Fifth Doctor adventure with Nyssa, Tegan and Adric that is set during Season 19. It’s quite an unusual story, but it’s very gripping to read and features a character-driven battle of wits between the Doctor and his friends against the Celestial Toymaker.

I bought this book as part of a sale on Amazon over Christmas 2011. Like many of the other books in that sale, it took me a while to get round to reading ‘Divided Loyalties’. Now that I’ve read the book, I can now say it’s one of the most intriguing stories ever been written in the history of ‘Doctor Who’.

‘Divided Loyalties’ has the Doctor, Nyssa, Tegan and Adric visiting the planet Dymok and meeting a spaceship crew. The Doctor responds to a telepathic message which turns out to be a trap by the Celestial Toymaker. He has been waiting for the Doctor and is about to turn his friends against him.

The book is divided into four ’rounds’ (I presumed four episodes, but the fourth is actually an appendix). The ’rounds’ titles are ‘Messages’; ‘Dreaming’; ‘Universal’ and ‘Annex’. The book is strangely structured as Round 2 centres on a flashback sequence to the Doctor’s past (more later).

I enjoyed how Gary harks back to the classic style of Brian Hayles’ writing of the Celestial Toymaker and delves into on the mind-playing tricks of the supporting characters. Nyssa; Tegan and Adric’s characters are developed upon in terms of their pasts and the current issues they have in the story.

‘Divided Loyalties’ is a book that has ‘divided’ opinion amongst the fans. I’ve taken these criticisms into account, although I found that Gary’s book kept me interested all the way through. It does have a weak conclusion, but I was immersed into the journeys of the main characters that I love so much.

Peter Davison’s Doctor is interesting here. I liked how the Doctor’s past gets touched upon; how it affects him when he’s confronting the Toymaker again and the mistakes he made come haunting back to him. His greatest fear of letting his companions down gets explored further during this novel.

Tegan’s journey also gets explored in this novel. She starts from being moaning and wanting to get back home to Heathrow Airport to wanting to stay with the Doctor and ‘crew for a while’ at the end. I liked the dream sequences Tegan has with seeing her family she left behind and being in Brisbane.

Nyssa was a joy to read. I enjoyed reading the scenes where Nyssa has dreams of being back on Traken. Her story struck a chord for me. I was anxious about when Nyssa’s trust in the Doctor gets challenged. She becomes angry with him for letting her down and not saving her father from death.

Adric was an interesting character to read in this novel. It turns out that Adric stinks of BO which seemed to make sense somehow. Adric’s arrogance gets touched upon and there’s a flashback of him back on his home planet of Alazarius. Adric’s mourning for the Fourth Doctor gets touched on.

The Celestial Toymaker depicted in this novel is the Michael Gough version. I remember seeing Michael in the surviving fourth episode of the original TV story, and could hear his voice perfectly when I read this book. The Toymaker is a very challenging opponent for the Doctor to face during the novel.

Like I said, there is a flashback sequence in Round 2 of the novel where the Doctor is on Gallifrey and how he first met the Toymaker. This is the younger First Doctor which was exciting to read. There were the appearances of familiar Time Lord characters under different names, including the Master.

Although this flashback sequence was interesting, it took away from the main plot of the story. Whilst it was enjoyable to read the First Doctor on Gallifrey, I wanted to know what had become of the Fifth Doctor and team. It does provide a backstory as to how the Doctor first met the Toymaker.

The book sadly has a weak conclusion. It all seemed rushed when the Doctor and friends defeated the Toymaker. I was disappointed that the Doctor and Nyssa’s reconciliation was briefly mentioned at the end. I’m sure with the flashback sequence edited in length; the conclusion could be stronger.

At the end of the book, there is an afterword by Gary Russell. This provides a little behind-the-scenes information on how ‘Divided Loyalties’ came to be written and I enjoyed reading into Gary’s insight.

I’m not sure whether this book will get adapted into an audio drama. Big Finish have done audio adaptions of the Virgin novels that were published in the 1990s. This is a BBC book and so far none of the ‘Doctor Who’ novels of that range are to be considered for audio adaption, which is sad.

‘Divided Loyalties’ is an enjoyable and obviously indulgent Fifth Doctor novel. I enjoyed the character journeys of the Doctor; Nyssa; Tegan and Adric. I found the conclusion weak and the flashback sequence diverting. But the book is a good read and, despite criticisms, makes an exciting adventure.