Vodyani with the Fifth Doctor, Tegan and Turlough

This is a Stephen Gallagher ‘Doctor Who’ story! What do you expect?

In 2013, ‘The Lost Stories’ range of ‘Doctor Who’ audio dramas by Big Finish ended. I was saddened by this as I hoped there would be more ‘Doctor Who’ stories originally meant for TV to be adapted into audio. I hoped ‘Project Zeta-Sigma’ with the Fifth Doctor, Nyssa, Tegan and Adric would get made.

Thankfully it wasn’t the end of ‘The Lost Stories’ audio range by Big Finish as two new ‘Doctor Who’ stories meant for the TV would be adapted into audio in 2019. This included ‘Nightmare Country’ with the Fifth Doctor, Tegan and Turlough and ‘The Ultimate Evil’ with the Sixth Doctor and Peri. So exciting!

Admittedly, I was more interested in ‘The Ultimate Evil’, having reviewed the Lost Season 23 of ‘Doctor Who’ audios by Big Finish for ‘Bradley’s Basement’ recently. But ‘Nightmare Country’ seemed to be interesting too, especially with Five, Tegan and Turlough. Thus, I pre-ordered the two Big Finish audios.

I would’ve liked ‘Project Zeta-Sigma’ to be adapted into audio instead of ‘Nightmare Country’. But there’s hope it will happen and that I’ll get to hear the story on audio with Five, Nyssa, Tegan and Adric. Hopefully Big Finish will get around to adapting ‘Goth Opera’ for the Big Finish audio range fairly soon. 😀 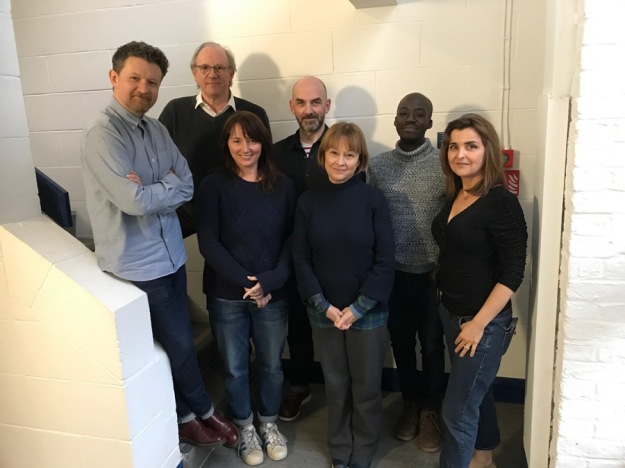 ‘Nightmare Country’ is a pretty unusual ‘Doctor Who’ story meant for TV and adapted for audio. It’s a four-part adventure by Stephen Gallagher, who is well-known for writing ‘Warriors’ Gate’ and ‘Terminus’. I guessed that this would be a pretty complex story rooted in hard science-fiction concepts.

Apparently ‘Nightmare Country’ was pitched to the ‘Doctor Who’ production office for Season 21. It would’ve been Steve Gallagher’s third ‘Doctor Who’ story, but it was rejected by script editor Eric Saward as it was considered too expensive like another million-dollar movie. After hearing it, I concur.

‘Nightmare Country’ seems to be a very visual ‘Doctor Who’ story that would’ve been best suited for the big screen rather than for TV and audio. It does seem very ambitious for a ‘Doctor Who’ story, but I won’t deny that it contains Steve Gallagher’s inventiveness for very complex and unusual storytelling.

Does that mean I like it? Well…err…um…it’s not as good as ‘Terminus’. But it’s better than ‘Warriors’ Gate’. It’s…okay. Yeah, ‘Nightmare Country’ wasn’t the epic adventure featuring the Fifth Doctor, Tegan and Turlough that I’d been hoping for. But it’s decent enough. It just wasn’t as exciting as I hoped.

I suppose that comes from being thrown in the deep end with no idea what was happening at first with the Doctor, Tegan and Turlough in this situation where they were with these TARDIS engineers working out a problem with virtual reality and such. The story’s conclusion wasn’t so satisfying either. 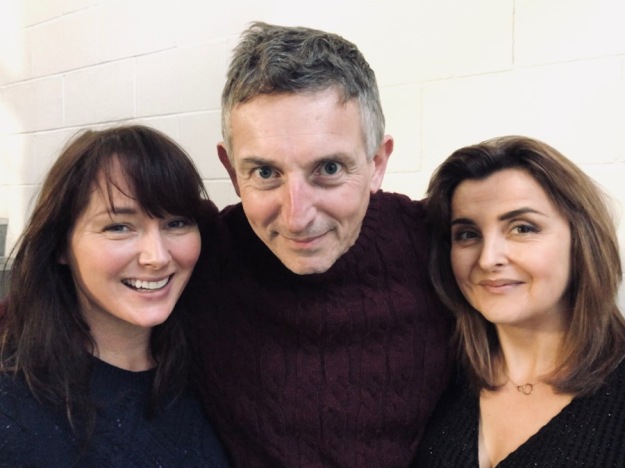 How can I put it? (sighs) Let’s talk about the story. It has the Doctor wake up in a strange, dead, hostile world. He has no memory of who he is and how he got there. Outside this hostile world, Tegan and Turlough are with these people who are called the Engineers, trying to save the Doctor and the TARDIS.

Things become chaotic when the very structure of reality in this nightmare world is at risk. The Doctor and the people he meets in this strange reality world have to deal with the menace of the monster-like Vodyani. Will the Doctor remember who he is whilst Tegan and Turlough attempt to save him?

So…yeah, this is a story that would’ve suited more for the Christopher H. Bidmead era rather than the Eric Saward era of early 1980s ‘Doctor Who’. I had to listen to the first episode again in order to get over some of the complex aspects of the story. I don’t believe I was any wiser after hearing it all in full.

This is a ‘Doctor Who’ adventure that requires more than one listen in order to appreciate its complexities. With that said though, I wasn’t reassured by the fact that this story didn’t have the Doctor, Tegan and Turlough arriving and departing somewhere as you would expect with many stories.

‘Frontios’ did it right by having the Doctor, Tegan and Turlough end up somewhere before leaving. Why couldn’t ‘Nightmare Country’ do the same? Like I said, I was thrown in the deep end with little idea of what was going on and struggling to connect with the characters who I found rather flat throughout.

That’s not to say the cast gave bad performances. Oh no! Peter Davison excels as ever as the Fifth Doctor in this adventure. It seems to be the format of certain Fifth Doctor stories where he seems to know little about what’s going on and is working out things with trying to solve the mystery in this tale.

Peter Davison does it in spades with trying to cope with his memory loss and still being the Doctor when interacting with members of the nightmare world he encounters. I liked it when Peter’s Doctor interacted with a version of Tegan sent to help and warn him over what’s happening in the real world.

I did get there being a sense of an emotional connection between Peter’s Doctor and Tegan, especially when he hugs her which is something he rarely does. It put me in mind of Peter Capaldi’s Doctor for some reason where he was reluctant to give hugs to Clara in Series 8 before he gave them in Series 9.

With Janet Fielding as Tegan and Mark Strickson as Turlough, I did struggle to identify certain aspects of their characters when listening to the early parts of the story, especially when they weren’t with the Doctor. But gradually over time, I did find Tegan and Turlough’s voices in this tale to a certain extent.

Tegan seems to be the one who gets more development out of the two companions in this adventure, especially when she volunteers to have a version of herself planted in the nightmare world to help the Doctor. It’s intriguing Tegan isn’t so whiny and complaining in this audio adventure compared to TV.

I know that’s a strange thing to say since Tegan’s had a lot more development in the audios compared to TV. But this story was meant for TV and it’s good Steve Gallagher didn’t reduce Tegan to that level. I liked it when Tegan and the Doctor discussed the fate of her other ‘self’ in that nightmare world in ‘Part Four’.

There is a scene where Turlough gets used as bait for the Vodyani during ‘Part Four’ instead of Tegan before he’s about to get mauled by them. But that’s all I can think to standout for Turlough. This is quite surprising, since Stephen Gallagher wrote reasonably well for Turlough’s character in ‘Terminus’.

In fact, wait a minute! In a behind-the-scenes photo for this story, Mark Strickson posed holding the crystal communication cube he had as Turlough from ‘The Black Guardian Trilogy’. I was expecting the Black Guardian to make an appearance in this. Why did Mark pose with the cube in that photo???!

There’s Ian Connigham who plays Maximov in the nightmare world and Konis, who might be the villain, in the real world. There’s Edward Dede who plays Volos, a significant character in the story, and does the voice of the Vodyani. I’m not sure what to make of the Vodyani. They do sound like dead zombies.

There’s also Tracy Wiles who plays Marzanna in the nightmare world and Engel in the real world. Again, I identified more with Marzanna than with Engel. And like I said, the characters felt flat with very little to go on to relate to them. Apart from Volos that is. He seemed to have a connection with Tegan.

I struggled with the real world aspects of the story. I believe it’s all set inside the TARDIS but I can’t be too sure of that. We seemed to be going to various parts of the TARDIS, including, I believe, the secondary console room from ‘The Masque of Mandragora’. It’s all a very Chris Bidmead atmosphere.

As I said before, I was unsatisfied with the story’s conclusion. The duplicate versions of Tegan and the Fifth Doctor rescue Volos from the nightmare world before they’re about to be attacked by the Vodyani. The duplicate Tegan and duplicate Doctor are about to mauled by Voydani…and then the story stops. Just like that!

I had to listen to that scene again and again, even on the download version I got from Big Finish to make sure this wasn’t a CD mastering error like with ‘Masquerade’. It turned out it wasn’t. It was very disconcerting. I would’ve ended the tale with the Doctor, Tegan and Turlough departing in the TARDIS.

‘Nightmare Country’ wasn’t very satisfying for me as a ‘Doctor Who’ story. I appreciate it echoing the tone of the early 1980s and it was bearable to listen to. But this wasn’t the epic adventure I hoped for from the mind of Stephen Gallagher. Which is a shame since I had high hopes for this audio adventure.

The CD extras are as follows. On Disc 1, there’s a suite of incidental music to enjoy. On Disc 2, there’s a trailer for ‘The Ultimate Evil’ with Colin Baker and Nicola Bryant. There are also behind-the-scenes interviews with the cast and crew including Peter Davison, Janet Fielding, writer Stephen Gallagher, etc.