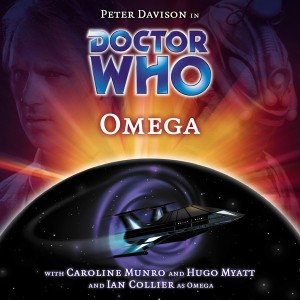 Five vs. Omega – Celebrating 40 Years of ‘Doctor Who’

This is a fascinating audio adventure that features a Time Lord legend!

‘Omega’ is the first story of a multi-Doctor ‘villains’ trilogy to celebrate 40 years of ‘Doctor Who’. It stars Peter Davison as the Doctor with Ian Collier as Omega. The story also guest stars Caroline Munro and Hugo Myatt in it. It is a four-part adventure by Nev Fountain. I greatly enjoyed this audio!

This is a fascinating and enjoyable adventure where the Fifth Doctor meets the fallen, tragic Time Lord legend again. Nev Fountain delivers an intriguing and light-hearted tale about Omega by making him not the villain he seems to be and how others view him in the universe he now dislikes.

I’ve had my CD cover of ‘Omega’ signed by the lovely Caroline Munro, who I’ve had the pleasure of meeting at the sci-fi fair ‘Timeless Collectors’ in Fareham before Christmas in December 2014. Caroline is known for starring as a Bond girl in the movie ‘The Spy Who Loved Me’ with Roger Moore.

Omega appeared in two ‘Doctor Who’ TV stories – ‘The Three Doctors’ and ‘Arc of Infinity’. He is a Time Lord legend who tragically gave his people of Gallifrey the power to time travel by ending up in a black hole in a universe of anti-matter. This is the third adventure to feature this Time Lord legend.

This story takes place after ‘Arc of Infinity’ and is the Fifth Doctor’s second encounter with Omega. The Doctor joins aboard a sight-seeing tour by Jolly Chronolidays into the ‘Sector of Forgotten Souls’ where Omega was lost. It turns out that Omega might still be alive when the Doctor finds him there.

If you’re wondering where Nyssa and Tegan are, they were left behind in Amsterdam in the closing moments of ‘The Waters of Amsterdam’ whilst the Doctor is on an adventure. This is a rare occasion where the Fifth Doctor is travelling alone without any companions and dealing with Omega.

Ian Collier triumphantly returns as Omega in this ‘Doctor Who’ audio adventure. I enjoyed listening to Ian as Omega, as he delivers brand new layers to the character and has a rich deep voice. Ian doesn’t play Omega as a ranting one-dimensional character from ‘The Three Doctors’ which I prefer.

Omega has managed to find his way into our universe and he stabilizes, despite being made of anti-matter. But he finds out our universe is cold and uninviting and he immediately dislikes it. He summons help from the Doctor in order to get back into the anti-matter universe and resume his previous exile.

Peter Davison as ever excels as the Doctor in this audio adventure. He delivers an enthusiastic and energetic performance and is definitely one of my favourite Doctors. Peter manages to drive the action forward effortlessly, despite being without a companion and he works things out by himself.

I liked the Doctor’s interaction with Omega in certain scenes of the story. The Doctor admires Omega as a hero. I liked it when they compare their exiles and the Doctor’s was pretty feeble. There’s a twist with the Doctor at the end of ‘Part Three’ which was shockingly surprisingly and unexpected for me.

Caroline Munro was extremely kind and friendly to me when I met her in real-life. I’m not a big James Bond fan, but I’ve seen Caroline in ‘The Spy Who Loved Me’. She told me she also worked with Tom Baker in ‘The Golden Voyage of Sinbad’. I’ve got a signed photo of Caroline with Tom Baker from that movie.

Caroline guest stars as Sentia, a stewardess aboard the ship to the ‘Sector of Forgotten Souls’. She guides the tourists on their trip to visit where Omega’s ship was lost in the black hole. She seems to know the Doctor already when he meets her and it turns out she’s going to marry Omega! Shocking!

Hugo Myatt guest stars as Daland in this audio drama. Hugo is well-known for playing the dungeon master Treguard in the kids’ game show ‘Knightmare’. I’ve seen that game show with my best friend Stephen from school. We both enjoyed it very much and I recall Hugo being very good as Treguard.

Daland is an actor who gets to play Omega on the Jolly Chronolidays tour. I believe he’s based his performance on the ‘Three Doctors’ Omega. Daland thinks highly of himself as an actor and he gets caught in the events of this story. He gets drugged by Sentia and helps the Doctor with defeating Omega.

I don’t want to reveal any spoilers about the story’s conclusion. But Omega is eventually defeated and sent back to the black hole. It’s a shame Ian Collier is no longer with us, as it would have been great if he played Omega again. But who knows?! Omega may return again for a fourth adventure on TV.

The CD extras are as follows. At the end of Disc 2, there are ‘coming soon’ trailers for ‘Davros’ (the second story in the multi-Doctor ‘villains’ trilogy) with Colin Baker and Terry Molloy and for ‘Zagreus’ with Paul McGann, Sylvester McCoy, Colin Baker and Peter Davison. There are also some nice writer/story notes by Nev Fountain and photos of the cast in the CD sleeve notes. In the cast, Conrad Westmaas (who would later play C’rizz with the Eighth Doctor) plays Tarpov in the story. 😀

‘Omega’ has been a great and enjoyable listening experience for me. This is a fine audio adventure with Peter Davison’s Doctor and Omega. It is well-written by Nev Fountain with light-hearted humour and thrills. I’m very pleased I’ve met and had my CD cover signed by the lovely Caroline Munro.