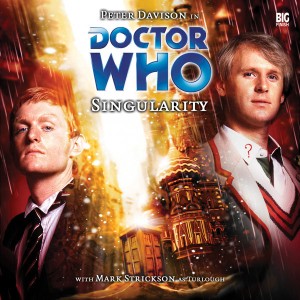 An Adventure in Russia with the Fifth Doctor and Turlough

Now that’s not to say I don’t like the Fifth Doctor/Turlough audios by Big Finish. On the contrary, I did enjoy ‘Phantasmagoria’ and ‘Loups-Garoux’ in certain measure. I’m looking forward to when I get a chance to hear ‘The Memory Bank and Other Stories’ someday. But I wouldn’t say they were superb.

I suppose it comes down to tastes, considering I find the atmosphere of Season 19 and the first half of Season 20 happier compared to the latter half of Season 20 and the whole of Season 21. There’s also the issue of there being not enough audios with the Fifth Doctor and Turlough together.

No-one’s to blame for that since Mark Strickson was living in New Zealand at the time and he’s probably a busy man wherever he is in the world. But I guess because I’ve enjoyed plenty of Fifth Doctor/Nyssa audios, there’s not enough for me to appreciate the Fifth Doctor/Turlough ones more.

That might be why I found ‘Singularity’, the third audio adventure to feature the Fifth Doctor and Turlough to be underwhelming. Now don’t get me wrong, I’m sure many people liked this story and it does have good performances from Peter Davison as the Doctor and Mark Strickson as Turlough. 🙂

But I can’t say I was excited by it. It’s not as disappointing as I found ‘The Kingmaker’ to be, but the plot and ideas were rather hard-going to appreciate. These concerned concepts of time and how humans from the future wanted to get revenge on the Time Lords for something that didn’t happen.

‘Singularity’ is a four-part adventure by James Swallow, who would later go on to write ‘Shockwave’ in the ‘Destiny of the Doctor’ series. He also worked on a ‘Star Trek’ spin-off TV series – ‘Star Trek: Voyager’, I believe as well as write some ‘Star Trek’ books. I don’t doubt that James is a good writer.

Maybe I haven’t been exposed enough to his works yet. But ‘Singularity’ wasn’t one of his stories that won me over. Mind you, there are some good character-driven scenes to be found, especially between the Fifth Doctor and Turlough as well as when they interact with the supporting characters.

In ‘Singularity’, the story takes place in the streets of Moscow, Russia in the near future. Sometime in the 21st century, I believe. The TARDIS ends up there where the Doctor picks up some strange temporal readings. Turlough is wanting to back out of investigating rather than the Doctor who is keen.

It’s intriguing to note that not many ‘Doctor Who’ stories have been before set in Russia. I’m sure many stories were in Russia after this one, but this was a rare opportunity for Big Finish to tackle. They got actual Russian actors to play some of the characters featured in the story who are Russian.

The interaction between the Fifth Doctor and Turlough is interesting. At one point, I heard it described that the Doctor and Turlough’s friendship is more business-like. That certainly can be true in terms of the school uniform and tie that Turlough wears and how they deal with alien menaces. 🙂

Peter Davison is excellent as ever in this ‘Doctor Who’ adventure. I like how Peter’s Doctor tackles the mystery of the Somnus Foundation, especially when they go back in time to try and figure out what happened and how the foundation started. He also tries to comfort Lena who gets really upset.

The Doctor is shocked to discover what the Somnus Foundation is and how they have grudge against him and the Time Lords for destroying their future. There’s clearly a connection going on between the TARDIS duo especially as the Doctor becomes concerned for him and when he’s doting on him. 🙂

Mark Strickson is equally good as Turlough in this adventure. I liked that scene early on in the story where he’s reluctant to help out Lena who gets bullied by a bullish guard at the Somnus Foundation, since it echoed a very similar scene in ‘Phantasmagoria’. Turlough can get very moody at times here.

But there are moments when he’s very compassionate especially when he has scenes with Lena and when he tries to persuade her not to change history and save her mum when going back in time. I did like that scene where Turlough shared with Pavel Fedorin about where he came from on Trion. 🙂

The rest of the cast include members of the evil Somnus Foundation. There’s Eve Polycarpou as Qel, Maitland Chandler as Seo, Michael Cuckson as Cord and Marq English as Xen. Qel seems to be the pretty vengeful one and she has this rivalry relationship with Seo when conducting their evil scheme.

There’s Natasha Radski as Lena Korolev and Max Bollinger as Pavel Fedorin. In many respects, Lena is like the pounding heart of this story who wants to be reunited with her brother. That I can appreciate and it’s understandable when she distrusts the Doctor and Turlough as she relies on Pavel.

Oleg Mirochnikov guest stars as Alexi Korolev, Lena’s brother and he’s with Dominika Boon as Natalia Pushkin and Billy Miller (who was in ‘Primeval’) as Tev on a planet called Ember in the far future. I struggled to get the Ember part of the story and Tev came across as a two-dimensional nasty person.

The story’s climax was hard to follow and I did find myself getting lost when time seemed to be out of control and the TARDIS soon disappeared. There’s also Seo getting deformed I believe as well as Qel getting angry. Thankfully the TARDIS returns to the Doctor and Turlough by the tale’s conclusion.

‘Singularity’ isn’t what I consider to be a great Fifth Doctor/Turlough audio after hearing them together in ‘Phantasmagoria’ and ‘Loups-Garoux’. I enjoyed Peter Davison and Mark Strickson’s performances as their characters, but I found the story underwhelming. It was confusing by the end.

The CD extras are as follows. There’s a ‘coming soon’ trailer for ‘Wildthyme at Large’ with Katy Manning as Iris Wildthyme.