Doctor Who Discovers Historical Mysteries with Peri and Erimem

This might sound strange. William Shakespeare got killed before ‘The Shakespeare Code’ occurred.

But I’m getting ahead of myself. ‘The Kingmaker’ is a ‘Doctor Who’ audio adventure by Nev Fountain, starring Peter Davison as the Fifth Doctor, Nicola Bryant as Peri and Caroline Morris as Erimem. I wish I could say I enjoyed this adventure, but after listening to it recently, I just feel rather baffled. 😦

Nev Fountain is renowned for being a comedic ‘Doctor Who’ writer. He’s had his fair share of ‘Doctor Who’ stories in Big Finish. Most of the time, I’ve enjoyed the stories he writes, especially ones with the Sixth Doctor and Peri such as ‘Trouble In Paradise’ and ‘Blood on Santa’s Claw and Other Stories’.

But I’m afraid ‘The Kingmaker’ didn’t really do it for me. It might have something to do with not knowing much about the historical period it’s set in. It might have to do with the clunky pacing and the jumping to and fro from one time zone to another. Perhaps I should’ve paid more attention to this. 🙂

Whatever the reason, ‘The Kingmaker’ became a pretty average ‘Doctor Who’ story for me and I’m afraid I ended up being dissatisfied with it. It’s a shame, as the concepts that seemed to try to get across did seem interesting. But in the end, there were things I wasn’t very happy with like Shakespeare.

The princes happen to be Edward V, the King of England and Richard of Shrewsbury, the Duke of York at the time. When Peri and Erimem get separated from the Doctor, they encounter a suspicious time-traveller. It’s someone from the Doctor’s past. But it’s not the person that you’re thinking of! 😦

I don’t think it helps with the episode lengths either. Despite it being a four-part adventure, the episodes are quite lengthy. I think the episodes might be above the 30 minute length. There are also quite a lot of talky scenes and not enough action, which is what I expect to find in ‘Doctor Who’. 😦

Some of the comedic stuff featured in the story is off-putting and distracting. Sometimes I found it difficult to take characters seriously, especially when some are disguising themselves. I was also put-off by some character motivations, especially in concerning the Doctor, Richard III and Shakespeare.

Peter Davison delivers a great performance as the Doctor. I enjoy his scenes, especially when he’s working out what’s going on and how he solves the mystery of the princes in the Tower. It was fun to hear him interact with a robot that got into his TARDIS as it demanded him to meet a deadline. 😀

I’m not sure whether the robot is one from ‘The Celestial Toymaker’ or one like Marvin from ‘The Hitchhiker’s Guide to the Galaxy’. Sometimes, Peter’s Doctor finds himself up against Richard III and he often gets concerned about Peri and Erimem, even with the possibility they might have died.

Nicola Bryant is great to listen to as Peri. It’s interesting how these Big Finish audios present Peri having more adventures with the Fifth Doctor compared to the two they had in the TV series. Nev Fountain has written many stories with Peri. He knows the character inside and out writing her here.

Also, Nev Fountain is in a relationship with Nicola Bryant. 😀 Peri shares many scenes with Erimem in the story as the two have become good friends over the years. Their banter is clearly evident, especially when they’re separated from the Doctor and making choices on avoiding changing history.

Caroline Morris is equally good as Erimem in this adventure. I must admit, I’m not really a huge fan of Erimem, but the stories I’ve heard her in are okay. It’s interesting how she is as a companion with the Fifth Doctor and Peri. So far, I find she shares more in common with Peri than with the Doctor. 😀

It’s amusing when Erimem twists a guy’s arm for touching her bottom on occasion, even when she and Peri attend a theatre in 1597. They do the joke thrice, which does become less amusing after a while. It was tense when Erimem contemplated that she and Peri kill themselves, but joked about it.

The story also features Arthur Smith as Clarrie, who turns out to be George, the Duke of Carence, the brother of Edward IV and Richard III. Clarrie seems to the run the tavern called the Kingmaker – which is what the story’s title allures to. It also seems he was meant to be dead according to history.

Jon Culshaw guest stars as Earl Rivers, who appears briefly early on in the story as he’s sent to protect Edward IV of the England on his way to be crowned in 1483. Jon Culshaw also provides the voice of Tom Baker’s Fourth Doctor, for the first time in a Big Finish audio, during a tape recording. 🙂

It’s also hinted at that the Ninth Doctor had a part to play in the story, with sending a letter to Peri and Erimem to read after the Fifth Doctor wrote a letter to them. This is because he was described as a ‘northern bloke with big ears’. I truly wish that Christopher Eccleston did some Big Finish audios.

There’s also Stephen Beckett as Richard, Duke of Gloucester…or rather Richard III. And…I found him boring to listen to. I guess he’s meant to be intimidating and threatening as he is one of the villains of this story, but a lot of the time, I did wonder if he couldn’t be bothered as he sounded monotone.

And there’s Michael Fenton Stevens as Mr. Seyton (which sounds like Satan, doesn’t it)…who actually turns out to be William Shakespeare…not the Master as Peri presumed. I did hope for it to be the Master as it was indicated he might be. I also don’t like Shakespeare being a villain in this tale.

The rest of the cast includes Marcus Hutton as Henry, Duke of Buckingham; Chris Neil as Sir James Tyrell; Linzi Matthew as Judith and Katie Wimpenny as Susan. Most of these characters are played for laughs and it’s such a shame. I would like to enjoy the comedy but take the history side seriously.

The CD extras are as follows. At the beginning of Disc 1, there is a trailer for ‘The Settling’ with Sylvester McCoy, Sophie Aldred and Philip Olivier. At the end of Disc 2, there are trailers for ‘Three’s A Crowd’ with Peter Davison, Nicola Bryant and Caroline Morris and the ‘Sarah Jane Smith’ story ‘Buried Secrets’ with Elisabeth Sladen. 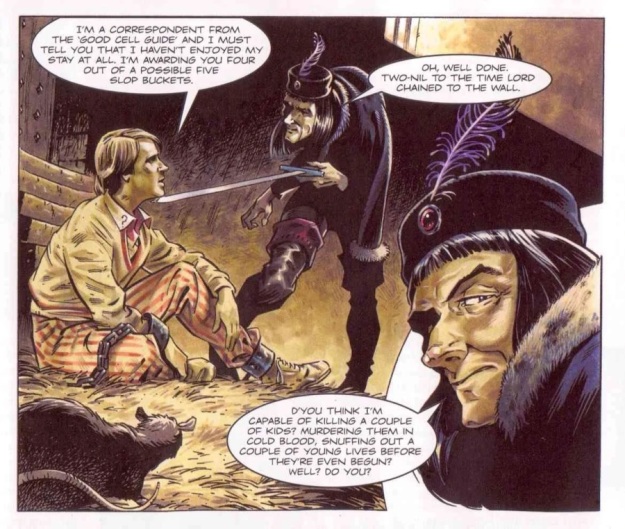 So yeah, ‘The Kingmaker’ wasn’t what I was hoping for. I ended up being disappointed with how Nev Fountain played out the history elements which contradicts things in ‘Doctor Who’, which is a shame. I enjoyed Peter Davison’s Fifth Doctor with Nicola Bryant’s Peri and Caroline Morris’ Erimem.