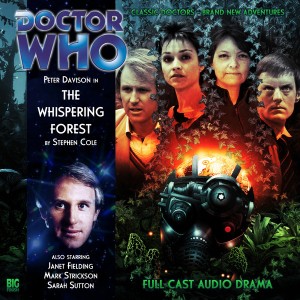 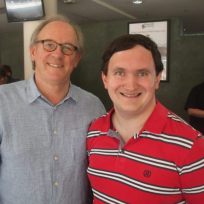 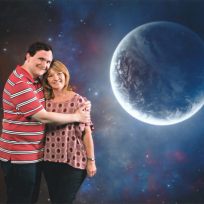 ‘The Whispering Forest’ is one of the most inventive stories I’ve come across by Stephen Cole.

This is the second story in this new series of adventures with the Fifth Doctor, Nyssa, Tegan and Turlough. Following on from ‘Cobwebs’, the four TARDIS regulars have re-established themselves as the new team. Steve Cole especially wanted to write for this TARDIS team as they are his favourites!

I’ve had the CD cover of ‘The Whispering Forest’ signed by Peter Davison and Sarah Sutton at the ‘York Unleashed’ event at the York Racecourse, York, August 2017. Peter shared with me that he needs to listen to these audios sometime and Sarah enjoyed sharing her scenes with Mark Strickson.

The story is about the Doctor, Nyssa, Tegan and Turlough visiting Purity Bay on the planet Cherdor. Purity Bay is in the heart of a forest where voices whisper within the trees. It’s a settlement where a small group of people live and they’ve got strong fanatical beliefs on ‘holding tight’ and being clean.

This small group of humans have recently been scared out of their wits by a group of robot drones called the Takers that essentially ‘take’ the weak and decrepit. Very soon, the Doctor and his friends get caught up in the affairs of Purity Bay and they have to solve the mystery of these robotic Takers.

Steve Cole has written for the Fifth Doctor before in ‘The Land of The Dead’ as well as ‘Masquerade’. ‘The Whispering Forest’ is extraordinary in terms of an alien world and with intriguing concepts throughout. Steve Cole comes up with a very unique setting with people obsessed with cleanliness.

When I attended the ‘Dimensions 2013’ convention in Newcastle, October 2013; I asked Sarah Sutton and Janet Fielding with Matthew Waterhouse on a panel, “which audio drama they’d like to see turned into a TV story?” Sarah said ‘The Emerald Tiger’ whilst Janet said ‘The Whispering Forest’.

Janet said that she enjoyed recording ‘The Whispering Forest’ and that it would be a great story to be directed by Peter Grimwade on TV. I can imagine Grimwade directing this story, making it very action-paced. Hopefully he would have filmed it in Ealing studios and not a BBC studio like in ‘Kinda’.

Nyssa spends more time with Turlough in this adventure, as they share scenes and get chased by Mertil and her acolytes. Nyssa rescues Turlough from drowning and they both discover the Takers’ hideout. I loved it when Nyssa gets to step in and protests to Mertil who is hell bent on killing Tegan.

Janet Fielding is very good as Tegan. She’s not argumentative as she was in ‘Cobwebs’. She shares more scenes with the Doctor and she supports Seska to lead the people of Purity Bay. She’s horrified by Mertil’s hygiene-obsessed beliefs and she rescues the Doctor from her when she tries to kill him.

Mark Strickson as Turlough is with Nyssa for most of the story. Turlough gets a brilliant name by Mertil and is called ‘Red Thatch’. The scenes between Nyssa and Turlough are thoroughly enjoyable and interesting as both share their intellect, although Turlough seems more pessimistic than Nyssa.

Peter Davison is very good as the Doctor in this adventure. I liked it when he and Tegan try to convince Seska to trust them and when they deal with Mertil’s extremist methods. The Doctor gets to learn more about Purity Bay; where its people came from and how they’d crashed on the planet.

The story has a superb guest cast. There’s Hayley Atwell (from ‘Captain America: The First Avenger’) as Sister Seska, daughter of Anulf; Sue Wallace as Sister Mertil; Paul Shelley (from the ‘Doctor Who’ story ‘Four To Doomsday’) as Jestan and Lennox Graves as Anulf, the original leader of Purity Bay.

The Takers are a group of robotic drones from the medical transport ship that crashed on the planet Cherdor. The Takers get ‘taken’ over by the whispering Shades in the forest. Their voices are eerie and unusual. I’m not sure I got what they were saying, as they’re too distorted and make little sense.

‘The Whispering Forest’ is a nice story with the Fifth Doctor, Nyssa, Tegan and Turlough in it. I found the story interesting and intriguing to listen to. I also enjoyed some of the characters like Seska and Mertil. I don’t admit to fully understand this tale, but it was definitely worth the entertainment in it.

These stories were recorded during the winter months where there was heavy snowfall, which could explain why Sarah and Mark weren’t interviewed. I remember Sarah saying at the first ‘Doctor Who’ convention I went to about digging her driveway free of snow to get to the recordings. Poor Sarah!

The story ends on a tense and gripping cliff-hanger! Tegan feels strange and is acting strange. She then changes. She’s not the Tegan we know and love anymore. This has happened before. Somehow it has returned! Tegan’s voice changes and she lets out an evil laugh! “I live Doctor! The Mara lives!”

On Disc 1, there’s a trailer for the next story with the Doctor, Tegan, Turlough and Nyssa called ‘The Cradle of the Snake’.

2 thoughts on “‘The Whispering Forest’ (Audio)”