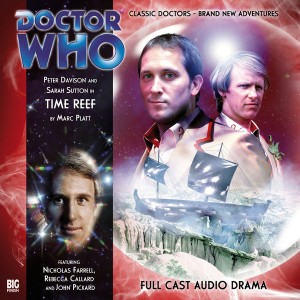 An Adventure with the Doctor, Nyssa and Thomas Brewster 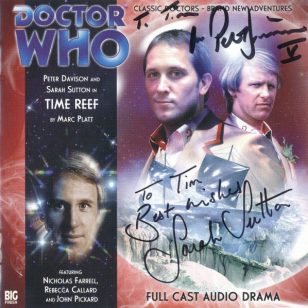 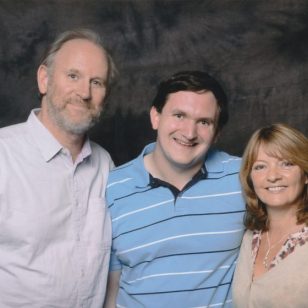 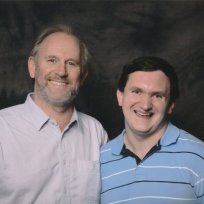 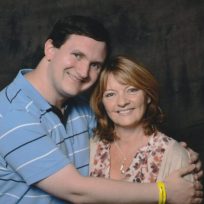 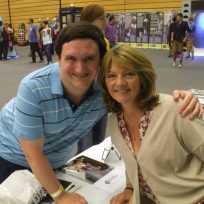 I found most of this CD strange and weird!

I purchased ‘Time Reef & A Perfect World’ from Amazon.co.uk as part of my continuing collection of the Fifth Doctor and Nyssa audio adventures in ‘Doctor Who’. This 2-disc CD stars Peter Davison as the Doctor with Sarah Sutton as Nyssa and John Pickard as Thomas Brewster – the new TARDIS trio!

I’ve had the CD cover of ‘Time Reef & A Perfect World’ signed by Peter Davison and Sarah Sutton at the ‘Worcester Comic Con’ in August 2016. Both Peter and Sarah have a vague memory of this audio drama as they made it a long while ago back in 2008. I told them that they were very good in this CD.

This CD release contains ‘Time-Reef’, a three-part story by Marc Platt; and ‘A Perfect World’, a bonus one-part story by Jonathan Morris. It’s a great CD to add to your collection of Fifth Doctor and Nyssa adventures starring Peter Davison and Sarah Sutton. It’s a CD I have greatly enjoyed now and again! 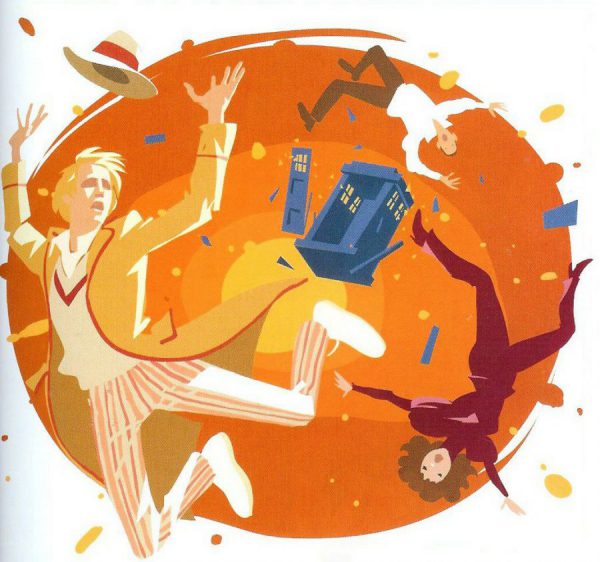 ‘Time Reef’ takes place after ‘The Haunting of Thomas Brewster’ and ‘The Boy That Time Forgot’.

The Doctor and Nyssa were stranded in Victorian times on Earth for some period, as the TARDIS was stolen by Thomas Brewster. For them, it’s not been long. But for Thomas, it could have been years. 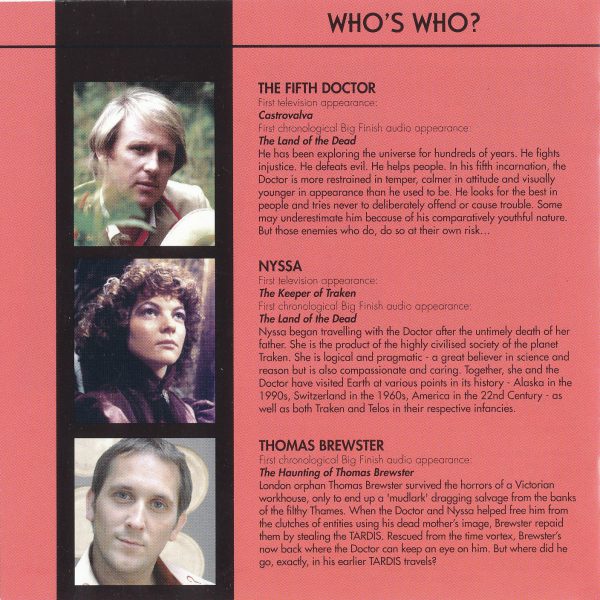 The Doctor and Nyssa find out how much damage Thomas has caused and it’s pretty extensive. For the TARDIS has been messed around and jumbled up with wrong corridors and things gone missing.

The Doctor is not too pleased and he blames Thomas on every occasion. The Doctor and Nyssa want to know what the young urchin from Victorian London has been doing; and what damage he’s caused.

Soon the TARDIS receives a distress call that takes them to a coral ‘time reef’ outside of space. The TARDIS soon gets killed, but the Doctor, Nyssa and Brewster aren’t alone as others are on this reef. 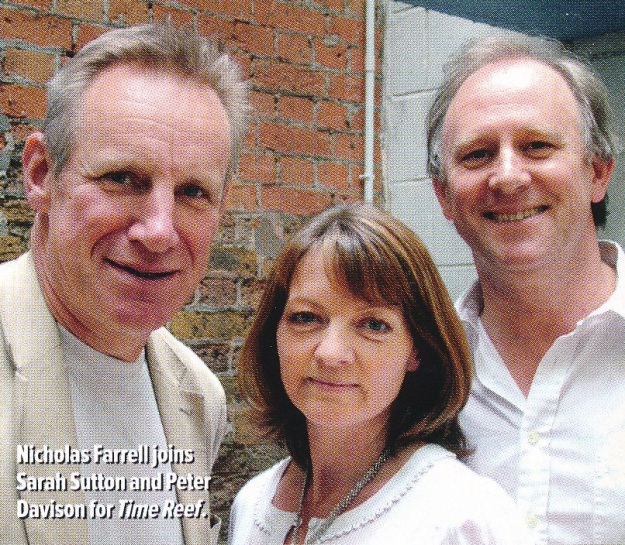 Marc Platt delivers an eerie and strange tale set on this time reef; that is comedic and complex. Marc previously wrote ‘Spare Parts’ with the Fifth Doctor and Nyssa. It’s great he’s writing for them again here.

Peter Davison delivers a brilliant performance as the Doctor. He’s determined to sort out what damage Thomas has caused and I really like how Peter’s Doctor discovers more about the time reef.

Sarah Sutton is lovely and does a really good performance as Nyssa. I know that Sarah doesn’t find the futuristic stories easy to follow, but she ploughs on through this well with a great performance. 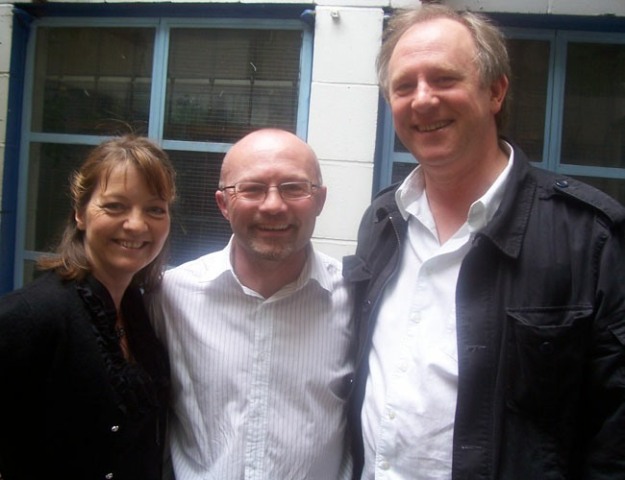 Nyssa is the referee between the Doctor and Brewster when trying to ease tension between them. I like how Nyssa tries to connect to Brewster and how her Trakenite empathy is explored with the Ruhk.

John Pickard returns as Thomas Brewster. He hasn’t told the truth about where he’s been with the Doctor and Nyssa. He’s reluctant to say anything and is in trouble when they return to the time reef.

Nicholas Farrell (from the ‘Torchwood’ story ‘Children of Earth’) guest stars as Commander Gammades. He’s a commander of a Greek sailing ship called the Gamma and he tries to get his men back to their home.

Beth Chalmers guest stars as Lady Vuyoki. Beth is lovely as she plays a really mysterious beautiful lady who lives in a jar and regards herself so highly and thinks everyone is below her – a snob really. 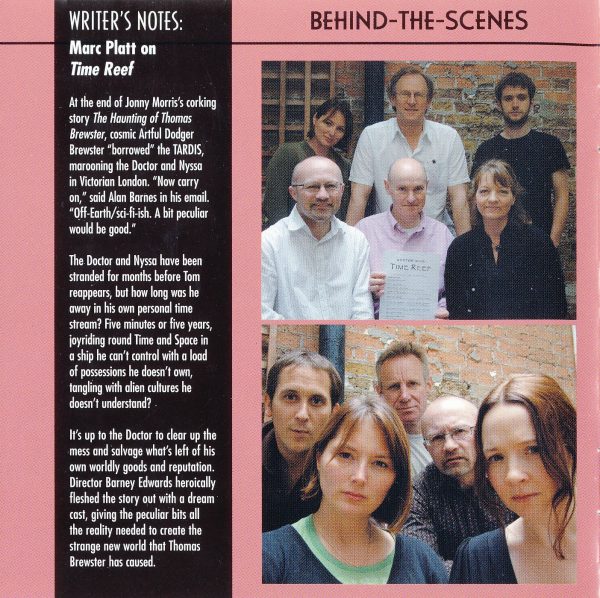 The guest cast also includes Sean Connolly as Captain Lucor, Gammades’ second-hand man and Sean Biggerstaff (who was in the Big Finish version of ‘Shada’) as Eumachus who dies early on in the story.

The monsters are the Ruhk, voiced by Sean Biggerstaff; Beth Chalmers and Rebecca Callard. They sound very scary and deep-voiced. One of them scares the living daylights out of Nyssa in ‘Part One’.

The music and the sound design are pretty eerie. It has an element of sounding like a 80s musical score and it adds to the weird atmosphere of time winds and un-stretched coasts on the time reef.

So ‘Time-Reef’ is a story that’s very intriguing and fascinating. It’s not one of my favourite stories, but I enjoyed it when the Doctor and Nyssa find out one of Thomas’ dodgy activities and they sort it out.