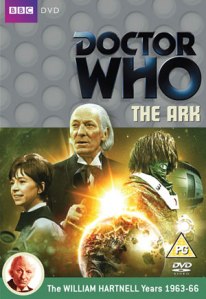 Monoids with the First Doctor, Steven and Dodo 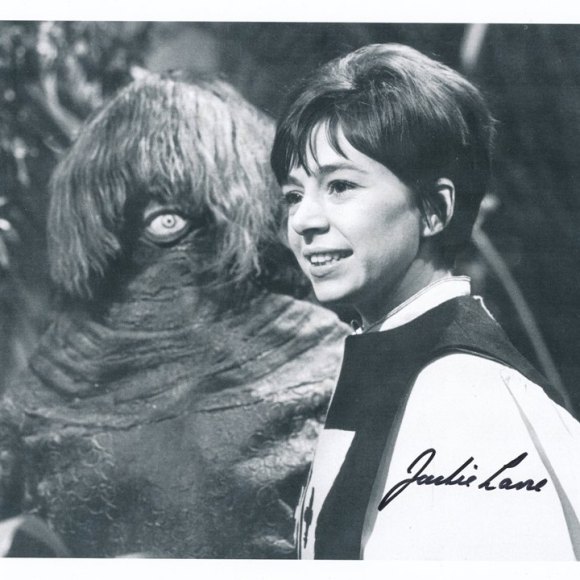 “Take them away to the security kitchen!”

‘The Ark’ is a four-part adventure by Paul Erickson and Lesley Scott for William Hartnell’s third season in ‘Doctor Who’. I purchased the story on DVD in July 2011. I only saw it once back then and I recall enjoying it. The second time I saw this story was for this review in July 2018. How times flies! 🙂

The story was originally commissioned by producer John Wiles and script editor Donald Tosh. It was one of the stories John Wiles wanted to do for his tenure as producer of the show. It certainly is a story that features a philosophical concept running through it about a world inside a huge spaceship.

Beforehand, John Wiles and Donald Tosh were lumbered with stories like ‘The Daleks’ Master Plan’ from the previous production team to make before they could get onto their stories for the rest of the season. Sadly, this was the last story to be produced by John Wiles in his tenure on the TV show.

John Wiles felt the toil and pressure of making ‘The Daleks’ Master Plan’ which was a 12-part story before he could do anything of his era. Thus he had enough and left after making this ‘Doctor Who’ story. Donald Tosh also left the production team to be replaced by a new script editor, Gerry Davis.

It’s such a shame as ‘The Ark’ is a story that has some potential. The story depicts a future where humanity has escaped the destruction of the Earth. They actually make a reference to it in the story before ‘The End of the World’ ever happened. I suppose ‘The Ark’ was ahead of its time back then.

Yeah ‘The Ark’ was the first attempt by ‘Doctor Who’ to depict how humanity would survive the death of their home planet. As well as ‘The End of the World’, there are also stories like ‘The Ark In Space’, ‘Frontios’ and ‘Utopia’ that dealt with this approach. This was intriguing to watch in this tale.

Sadly, although ‘The Ark’ has some merit in its philosophical nature as a story, even Peter Purves praised the story for its creativeness, this ‘Doctor Who’ adventure didn’t have a big impact on me. Hence why I came back to it afresh and had a vague memory of it before I re-watched it for my blog.

I don’t know what it is, but this story doesn’t feel that…well, exciting enough. I mean the first half’s good. But by the time we come to the second half, it feels rather sagged in places. That’s not to say the writing’s bad. It’s actually good. But the visual representation of this story feels drab somehow. 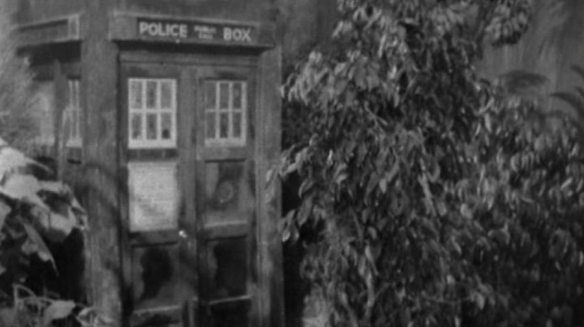 How else can I explain this? Well I suppose I better start with the story’s approach. ‘The Ark’ is divided into two halves. The first half has the Doctor, Steven and Dodo arriving inside the Ark via TARDIS. Dodo has a bad cold which spreads a virus to people who have forgotten the common cold.

The second half has the Doctor, Steven and Dodo returning to the Ark about 700 years later to find that the humans have been taken over by the Monoids, who were once their friendly servants. The Monoids intend to colonise the new home of Refusis II for themselves and not share it with the humans.

And I think what lets this story down is the monsters, the Monoids. These are web-footed creatures that have overgrown Beatles-like hair as well as one eyes in their mouths. I didn’t realise the eyes were in their mouths at first. I guess the Monoids survive by sucking on their eyeballs. YUM, YUM!!! 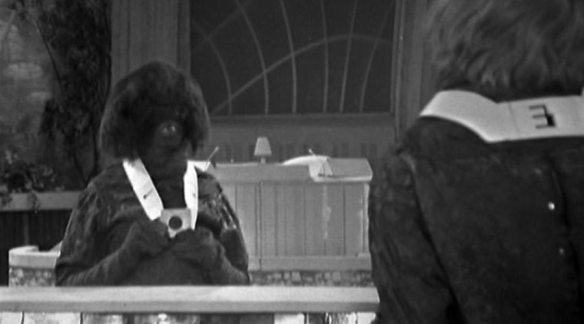 But it’s not just the Monoids’ appearance that ruins it. In the first half, they seem okay with being silent and not speaking much, using only sign language to talk to the humans (which I often made fun of whilst re-watching this). But by the second half, the Monoids now seem to be talking a lot.

And it’s the Monoids’ voices that make them pretty silly. The voices are done by future Dalek voice artist Roy Skelton as well as John Halstead. Hearing the Monoids talk makes them sound so ridiculous. I don’t know how you can take these monsters seriously when you hear how they sound.

The Monoids are played for laughs in terms of their voices, especially when they reveal their evil plans in front of everyone else. Even that line when the Monoid leader says, “Take them away to the security kitchen!” had me in laughs. Seriously, play that line over and over again and it’ll give you joy. 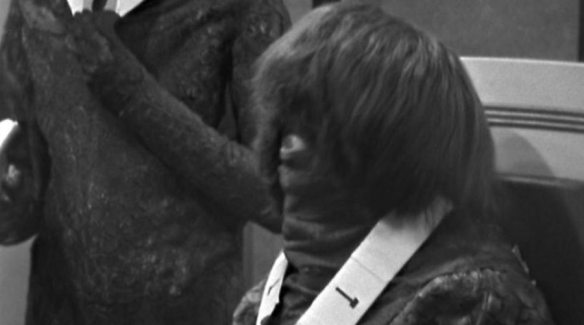 There’s also a funny moment where one Monoid is almost about to reveal his plans to Dodo on what his kind are going to do with humanity. He hesitates before he says “No!” to Dodo to deny they’re backstabbing the humans. But the way he hesitates sounds silly and laughable as you hear it.

This story features the first (technically second) TV appearance of Jackie Lane as the new ‘Doctor Who’ companion, Dodo Chaplet. Dodo previously appeared at the end of ‘The Massacre of St. Bartholomew’s Eve’. That was a quick introduction for Dodo when she got whisked off into the TARDIS.

Dodo as a companion sadly didn’t win a lot of fans. That’s not to say Jackie Lane is a bad actress. On the contrary, she does well with the material she’s given. But the character she’s given doesn’t come across very well. She’s a cheeky little girl matching to Susan’s level and that is all you can say of her. 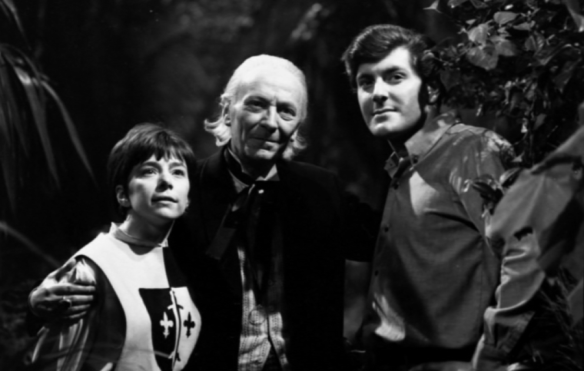 She also has this strange Northern accent which often changes and gets toned down as she progresses in the series. I don’t know what it is about Dodo, but she didn’t have the same qualities that Susan and Vicki had before her. She does suit as a good foil with the Doctor and Steven though.

Incidentally, I had a signed photo of Dodo with a Monoid by Jackie Lane when I attended the ‘Project Motor Mouth 2’ convention in Slough, August 2013. I’ve never met Jackie Lane at a ‘Doctor Who’ convention because she hasn’t done any. Nor has she done a Big Finish ‘Doctor Who’ audio as Dodo.

Peter Purves is pretty good as Steven Taylor in this adventure. Like I said, Peter Purves was enthusiastic about the story and it’s clear he’s enjoying the material given to him as Steven. Steven attempts to stand on trial on behalf of himself, the Doctor and Dodo when a deadly virus breaks out. 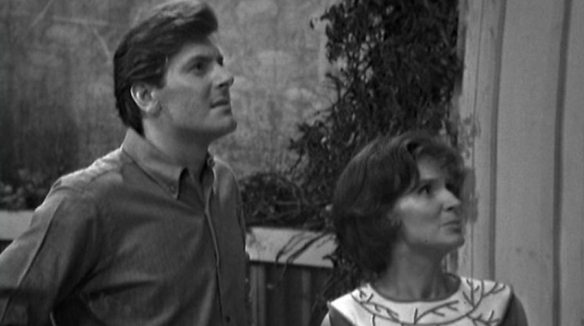 Steven suffers the effects of that virus when he collapses in his ‘trial cubicle’. I like how Steven copes in the second half of the story where he and the humans under the slavery of the Monoids attempt to free themselves. Steven also works well with the Doctor when they are trying to solve a situation.

William Hartnell of course delivers well as the Doctor in this adventure. I’m not sure whether he regarded this story highly, but he seems to get to be in authority when the Ark is under threat by a deadly virus caused by Dodo’s sneezing. He works hard to get an antidote in order to save everyone.

I liked that moment when the Doctor defies a Monoid who smashes things up inside a Refusian’s house. He also has an interesting conversation with an invisible Refusian inside his home. The Doctor also gets to outwit the Monoids when he and everybody else try to prevent a bomb from exploding. 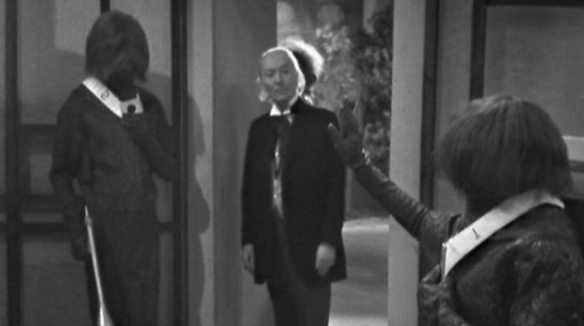 The story was directed by Michael Imison. This is sadly Michael Imison’s only contribution to ‘Doctor Who’, since during the making of ‘The Ark’, he got fired due to the time he took in making this story. I commend Michael Imison for the visuals he puts in this story, including having an elephant appear.

I got to say I’m a little shocked that the humans of the future don’t know the Biblical story of Noah’s Ark when Dodo mentions it to them in comparing it to their Ark. These are humans with advanced knowledge and technology with a world in a spaceship, and they don’t know Noah’s Ark. Shocking!!!

The DVD special features are as follows. There’s the ‘All’s Wells That Ends Wells’ documentary focusing on H.G. Wells and ‘Doctor Who’. There’s ‘One Hit Wonder’ on the Monoids and ‘Riverside Story’ featuring writer Matthew Sweet and Peter Purves. There is also a photo gallery of the story. 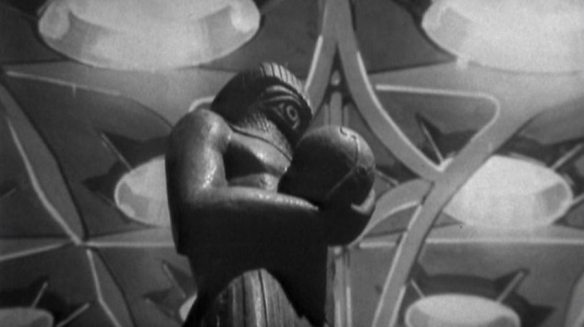 ‘The Ark’ is a decent story from the William Hartnell era of ‘Doctor Who’. I wouldn’t say it’s a great ‘Doctor Who’ story, but it’s certainly decent to watch. The visuals and the concepts of this adventure are interesting, but I do feel the Monoids let it down somewhat in their appearances and silly voices.

William Hartnell, Peter Purves and Jackie Lane stand out for me as the Doctor, Steven and Dodo and it’s intriguing how they visit the Ark twice in two time zones. They visit it once and they visit 700 years in the future. I don’t think that’s done often. You could consider this as two stories in one.