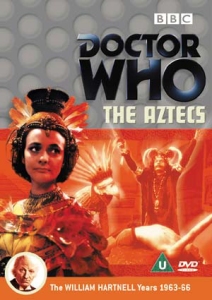 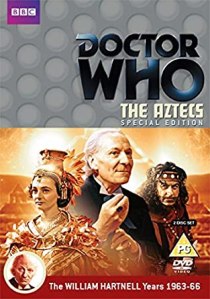 Barbara and the Aztecs

“You can’t rewrite history! Not one line!”

Remember when Rose Tyler tried to change history by saving her dad in ‘Father’s Day’? Well, Barbara Wright tried it first! ‘The Aztecs’ is a bona fide ‘Doctor Who’ historical adventure that is faithful to the original format of the programme by presenting historical tales with educational values in them. 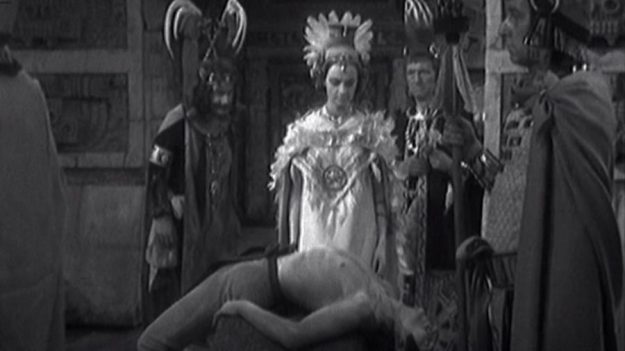 ‘The Aztecs’ was originally released on DVD back in 2002 with very limited special features. It has now been re-released as a 2-disc Special Edition DVD in 2013. It has the story on Disc 1 and brand-new special features on Disc 2, including a reconstruction of ‘Galaxy 4’ with the third episode found.

In the story, the TARDIS lands in a tomb within an Aztec temple. Barbara finds a bracelet and wears it, before she’s soon mistaken by the Aztecs as the great god Yetaxa. Barbara intends to change history by stopping the barbarism occurring in the Aztec lands. But the Doctor is having none of this.

I must admit, I’m not very familiar with the Aztecs as a period of history. I certainly heard about them and seen pictures of what they looked like. But I didn’t know much about them when I was studying history at school, which is a shame as I would have enjoyed studying the Aztecs in the class. 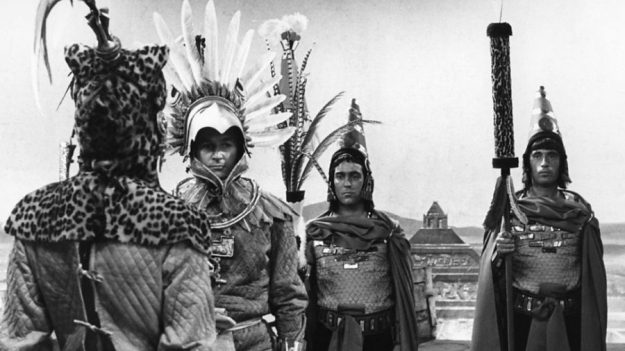 I was shocked and disturbed by what the Aztec culture represents. They’re sometimes highly civilised and well-respected. But there are also dark sides to the Aztecs as they cut people’s hearts out and give them as sacrifices to the gods. This is a place the Doctor and friends don’t want to be in.

This is a story that allows Jacqueline Hill as Barbara Wright to shine. Barbara is a history teacher from Coal Hill School in 1963, so her specialty subject is put to good use to this story. Barbara manages to pass off well as the great god Yetaxa at first and is determined to put an end to all of these violent horrors.

Barbara’s attempts to change history don’t go well, as during the story she has people like Tlotoxl doubt her divinity and plot to ruin her authority. It’s a tough time for Barbara as all she wants is good to come out of her tampering, not realising how so strong the Aztecs’ beliefs in sacrifices are in this. 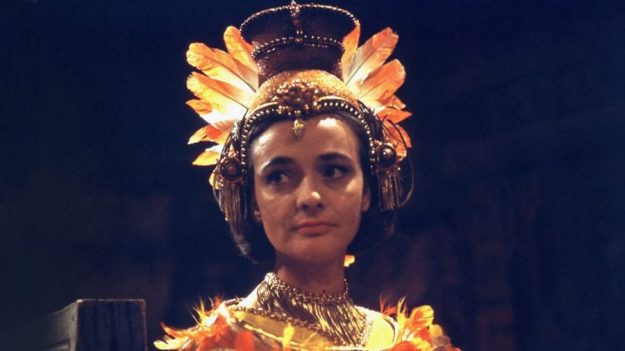 In this story, Barbara finds herself falling out with the Doctor who advises her not to tamper with history. He gets very angry when Barbara disobeys his instructions and there’s a tense scene between them in the second episode that I found intense and gripping between the two characters.

I liked William Hartnell’s performance as the Doctor in this adventure. Hartnell seems very confident in his role as the Doctor by this point, despite his tendency to fluff on lines. I like the special relationship he shares with Barbara, as he sees her point of view but has to take the bigger picture.

I enjoyed the Doctor’s attempts to find a way back into the tomb of Yetaxa so that he and his friends can escape in the TARDIS. He forms a close relationship with Cameca, who he inadvertently proposes marriage with a drink of cocoa. He inadvertently helps Ixta to defeat Ian in a deathly fight. 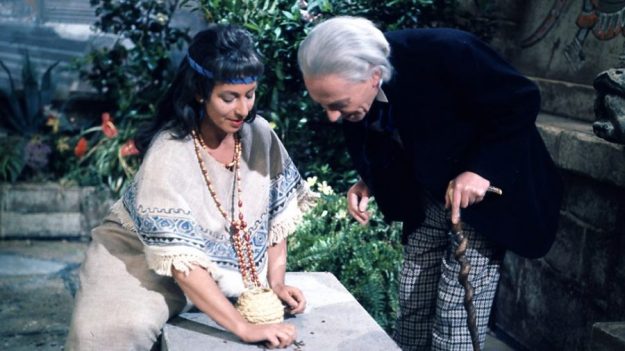 William Russell is very good as Ian in this story. Ian gets to chosen to be an Aztec warrior and fights alongside Ixta for a short while before they turn enemies. Ian shares some nice scenes with Barbara in this story and is pretty neutral when she attempts to change history and the Doctor is against her.

Ian manages to find a way into the tomb of Ixta by removing a stone in a tunnel. He gets locked in by Ixta and almost suffers drowning before he finds a way to get into the tomb by removing the roof above him. Ian gets to be the action man, since he fights Ixta in two fights, one in full Aztec armour.

Carole Ann Ford is really good as Susan in this story. Carole actually took a two-week holiday during the making of this story. Thus her appearances in the second and third episodes were recorded on film before she went away on holiday, as Susan is taught the Aztec ways and is chosen to be married. 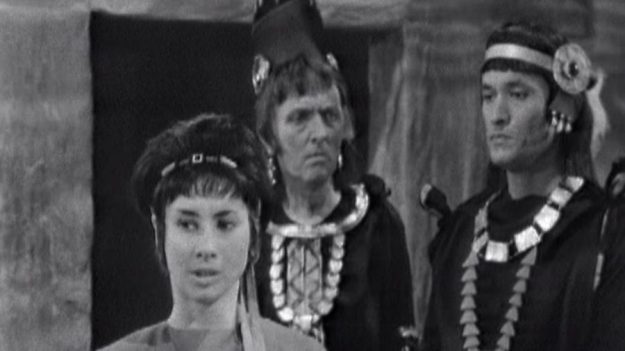 Susan protests when a sacrifice by the Aztecs takes place to make it rain. She gets punished by going with Autloc to learn about how to live in an Aztec society as a woman. But things get worse when she protests on being told who she’s to marry and when the Perfect Victim chooses her as her bride.

Keith Pyott guest stars as Autloc, the High Priest of Knowledge with the Aztecs. Autloc is a kind-hearted man who has good wisdom and is faithfully loyal to Barbara as Yetaxa. Barbara puts her trust in Autloc and reveals to him certain prophecies about the future of the Aztecs that he takes in.

Autloc gradually begins to doubt and questions ‘Yetaxa’s divinity, which is prompted by Tlotoxl. Things are made worse when Ian is accused for striking Autloc on the back with his club. Barbara regains Autloc’s trust in her eventually, but he’s lost his faith in what he believes and leaves the city. 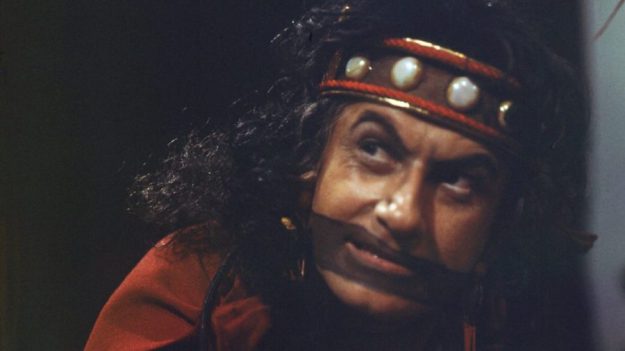 John Ringham guest stars as Tlotoxl, the High Priest of Sacrifice with the Aztecs. I’ve seen John Ringham in episodes of ‘Dad’s Army’ and he would later appear in the ‘Doctor Who’ stories ‘The Smugglers’ and ‘Colony In Space’. John Ringham looks so different and frightening as the evil Tlotoxl.

Tlotoxl clearly relishes in making sacrifices to the Aztec gods during the story. He quickly suspects and doubts Barbara as Yexata, claiming her to be a false goddess and intending to destroy her. Tlotoxl is pretty mean and relishes when he sees Barbara’s friends suffer and he challenges her to save Ian.

Ian Cullen guest stars as Ixta, an Aztec warrior who becomes Ian’s rival in the story. Ixta loves to have a good fight and he clearly dislikes Ian the moment he sees him. He’s determined to see his rival dead and manages to persuade the Doctor to give him a weapon of poison to weaken Ian in a fight. 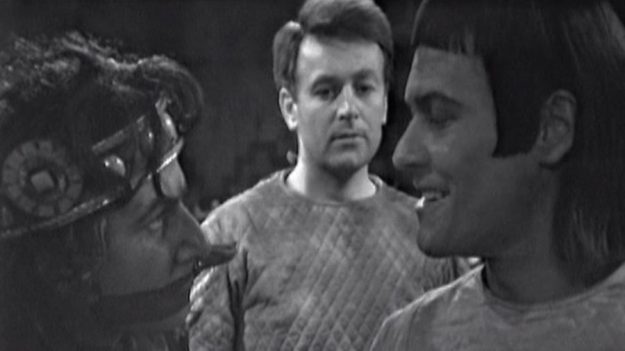 Ixta’s hatred towards Ian is encouraged by Tlotoxl when he finds ways to defeat his enemy to the bitter death. I found it really tense when Ian and Ixta fought each other and when Ixta locks the tunnel entrance to Yexata’s tomb with Ian inside. Ixta is so impulsive and a ruthless man in this story.

Walter Randall guest stars as Tonila, an Aztec priest during the story. Walter Randall would later play more roles in ‘Doctor Who’ including El Akir in ‘The Crusade’. Tonila gets encouraged by Tlotoxl to go against Barbara as Yexata and prepares a poison in a cup for her to drink when she sits in her throne.

I liked that scene where Barbara manages to see with Ian’s help that Tlotoxl and Tonila are trying to poison her. She challenges them to drink the cup first and they are hesitant. Barbara is angry and throws the cup to the floor which smashes saying, “So this is your friendship!” which was very effective. 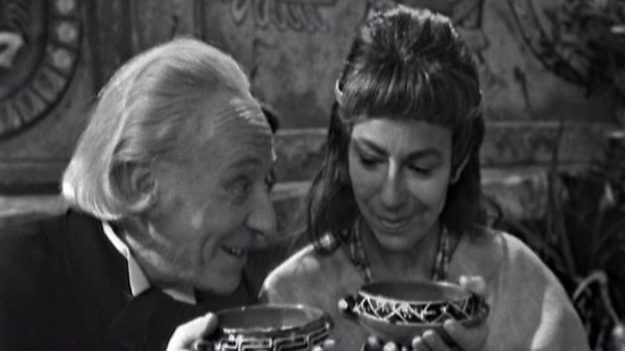 It was interesting to see the Doctor in a semi-romantic relationship before the days of David Tennant in the new series. Cameca tends the gardens in the Aztec city and becomes a helpful ally to the Doctor when saving his friends. Their goodbye to each other is pretty touching and sweet to watch.

There’s also Tom Booth as the First Victim and Andre Boulay as the Perfect Victim. I found it very shocking when these people were willing to sacrifice to their gods and it’s done in a grotesque manner. It is quite amazing to think that the Aztecs lived this way and it required so much barbarism.

I’m not sure how historically accurate ‘The Aztecs’ is in terms of its context and the way the characters talked. But I’m very impressed with the set design and the costumes featured in this story, as it feels so authentic and you can imagine it’s the way the Aztecs lived their lives back then. 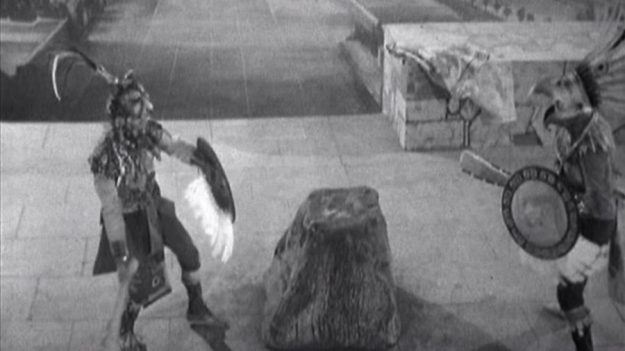 The DVD special features on the 2-disc Special Edition DVD are as follows. On Disc 1, there’s ‘Remembering The Aztecs’, which includes interviews with Ian Cullen, John Ringham and Walter Randall. There’s also ‘Designing the Aztecs’, an interview with designer Barry Newbery; ‘Cortez and Montezume’ with ‘Blue Peter’s Valerie Singleton and the ‘Restoring the Aztecs’ featurette. There’s a commentary with William Russell, Carole Ann Ford and producer Verity Lambert and an Arabic Audio soundtrack for the fourth episode of the story. There’s also an info-text commentary to enjoy; ‘Making Cocoa’ with Tlotoxl and Tonila; and the ‘TARDIS-Cam No. 3’ CGI model sequence. There’s also a photo gallery of the story and some ‘Intro Sequences’ to the story when you press the ‘PLAY ALL’ option on the main menu. There’s also an Easter Egg to look out for on this disc.

On Disc 2, there’s the reconstruction of ‘Galaxy 4’ with the latest surviving third episode of the story in it. There’s also ‘Chronicle – The Realms of Gold’; the ‘Doctor Forever! – Celestial Toyroom’ documentary, focusing on the toys of ‘Doctor Who’ and ‘It’s A Square World’, a funny sketch with Clive Dunn, who would later play Lance Corporal Jones in ‘Dad’s Army’, as the First Doctor. There’s ‘A Whole Scene Going’, which features rare behind-the-scenes footage of the movie ‘Daleks – Invasion Earth 2150 AD’ and an interview with director Gordon Flemyng. There’s also a ‘Radio Times Listings’ PDF of the story. There’s also a ‘coming soon’ trailer for ‘The Ice Warriors’ with Patrick Troughton, Frazer Hines and Deborah Watling. 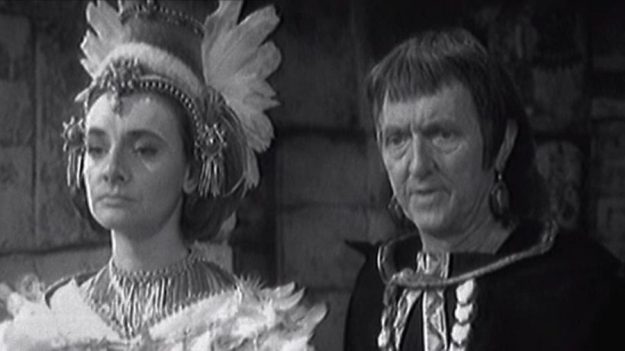 ‘The Aztecs’ is one of the finest historical adventures made in ‘Doctor Who’. Jacqueline Hill stands out as Barbara in this and it’s so interesting how they did a story in the 60s where one of the regular characters tries to change history as a goddess. I have grown to appreciate the story over the years!