The First Doctor, Ian, Barbara and the Marsh-Wains 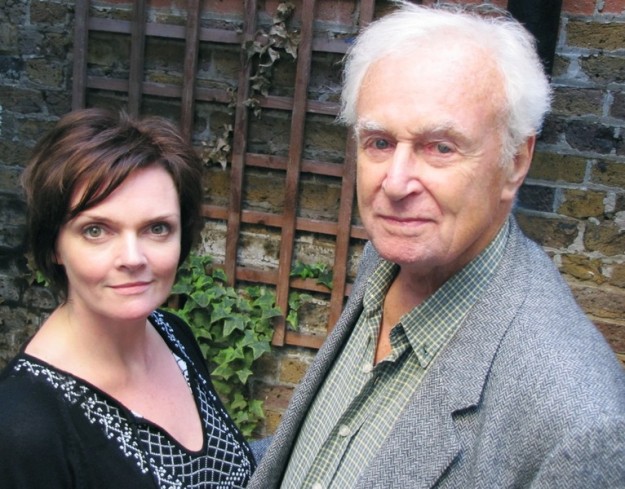 Sharon Small and William Russell in ‘The Revenants’.

This is a bonus Companion Chronicle adventure featured on Disc 5 of ‘The Light At The End’.

This story was originally released with an issue of ‘Doctor Who Magazine’ in 2012. Now fans can enjoy this adventure with this limited edition of ‘The Light At The End’ or as a download by Big Finish.

This is a First Doctor Companion Chronicle by Ian Potter starring William Russell as Ian. It features the First Doctor with Ian and Barbara and takes place right after ‘The Dalek Invasion of Earth’ ended.

It feels right that this bonus adventure should be included in a 50th anniversary collector’s edition of ‘The Light At The End’ as this. After all, William Hartnell was in the show when it began back in 1963.

‘The Revenants’ is a story about an older Ian returning to the Orkney Islands in Scotland in 2012. He meets a girl called Jeannie and he tells her about an adventure he had with the Doctor and Barbara.

Ian recalls and tells his adventure set in 1956 all those years ago. This was a somewhat relaxing and entertaining audio experience. I wouldn’t rate it highly as a great ‘Doctor Who’ story but it’s not bad.

The action and pace seems slow in places, but I enjoyed the murky atmosphere of the Orkney Islands described by Ian and I could feel the marshy lands under my feet. It’s good to hear this in the winter.

William Russell performs really well as Ian, the Doctor and Barbara. I like Ian’s sense of nostalgia when he reflects back on his adventure in 1956. I also like the relationship Ian has with Barbara here.

I enjoyed William’s interpretation of the First Doctor. It’s not as good as Peter Purves’ version, but the crotchety nature is still there. I liked it when the Wissfornjarl turns out to be the Doctor at the end of Episode One.

Lots of references are made to previous adventures with the Doctor, Ian and Barbara. Most particular is the reference made to Susan’s departure from the end of ‘The Dalek Invasion of Earth’.

The Doctor is still recovering from missing his granddaughter after locking her out of the TARDIS. It was interesting how Ian recalls that during between ‘The Dalek Invasion of Earth’ and ‘The Rescue’.

William Russell is joined by Sharon Small who plays both Janet and Jeannie in this story. I like the Scottish tones of Sharon’s voice and she plays both characters from two different time periods.

Jeannie is someone who meets an older Ian and is intrigued by his adventure from 1956. Janet is someone the Doctor, Ian and Barbara meet in 1956; is a witch and knows about the Marsh-Wains.

I did find the Marsh-Wains slightly disappointing. It’s not that the sound design was terrible, but for me they weren’t realised enough and they didn’t seem to have a huge impact on me from this story.

I did like the Doctor’s confrontation towards them in the second episode of the story. Perhaps with more listens, I’d be able to appreciate the Marsh-Wains more. But sadly they seem faded for me.

Sharon Small and William Russell in ‘The Revenants’.

‘The Revenants’ has been an enjoyable story to listen to. It’s a nice bonus adventure to add to the 50th anniversary celebrations. I wouldn’t consider it to be great, but I did enjoy William Russell as Ian.