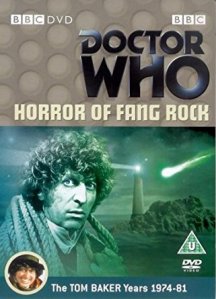 Rutan at a Lighthouse with the Doctor and Leela

This is a creepy ‘Doctor Who’ story set on a lighthouse!

‘Horror of Fang Rock’ has gained itself a position among ‘Doctor Who’ fans for being the most chilling and terrifying of stories ever made. It has a gothic atmosphere that is resonant throughout, despite the fact that this was Graham William’s first story as producer of the series.

I’ve had the DVD cover of ‘Horror of Fang Rock’ signed by Louise Jameson at the ‘London Film & Comic Con 2017’, Olympia, July 2017. I’ve shared with Louise how I found this story creepy and she agreed that it’s a story most talked about by the fans. I hope to review the audiobook of the novelization read by Louise someday.

The story takes place on the island of Fang Rock, off the south coast of England in the early years of the 20th century. A strange light falls from the sky and ends up in the sea. Soon, the lighthouse on Fang Rock becomes under siege, as a green blobby jellyfish alien comes to attack.

This is a four-part story by Terrance Dicks, who is a ‘Doctor Who’ legend since he was the script-editor of the series during the Jon Pertwee era. ‘Horror of Fang Rock’ is an emergency replacement for an abandoned vampire tale which would soon become ‘State of Decay’ in 1980.

In 1977, Terrance Dicks manages to conjure up a story that is a horror mystery set on a lighthouse. Script editor Robert Holmes suggested to Dicks that he come up with a story about a lighthouse. Dicks soon got the boys’ book of lighthouses to help him write this very creepy story. 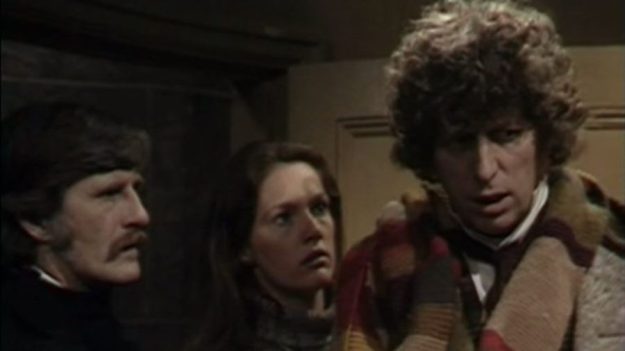 This story was directed by Paddy Russell, who also directed ‘The Massacre of St. Bartholomew’s Eve’, ‘Invasion of the Dinosaurs’ and ‘Pyramids of Mars’. I was quite surprised when I found out that Paddy found Tom Baker difficult to work with on ‘Horror of Fang Rock’, considering that this tale is a fan favourite.

‘Horror of Fang Rock’ has a strong cast of characters who each have different and interesting journeys of their own. It’s also a story where all of the supporting characters die at the end of the story which is quite a shock, even if some of the characters are pretty unsavoury during this.

There’s Colin Douglas as Reuben, the main lighthouse keeper in the story. Colin has been in ‘Doctor Who’ before in ‘The Enemy of the World’ with Patrick Troughton and he’s well-known for starring in ‘A Family at War’. Reuben does have a very sticky end half-way during the eerie tale. 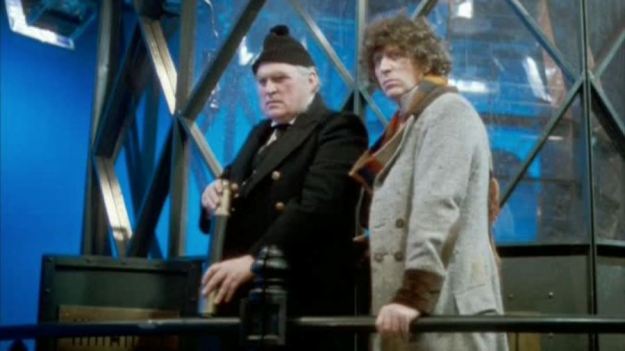 John Abbot guest stars as Vince Hawkins, another lighthouse keeper in the story. I felt sorry for this character, since Vince seems such a nice chap and he had to die at the end of the story. It was very amusing when Vince saw Leela undressing herself before him and he had to look away.

A luxury yacht soon crashes on to Fang Rock with four survivors that come to the lighthouse. There’s Sean Caffrey as Lord Palmerdale. Palmerdale is a rather unsavoury character who is impatient to get off Fang Rock very soon since he wants to get to London on important business.

There’s also Alan Rowe as Colonel Skinsale. Alan Rowe has appeared in ‘Doctor Who’ before in ‘The Time Warrior’ and he would later appear in ‘Full Circle’ of ‘The E-Space Trilogy’. Skinsale seems very reasonable and gentlemanly, but he has a weakness that becomes the death of him.

There’s also Annette Woollett, who I’ve met at a convention, as Adelaide, Lord Palmerdale’s secretary in the story. Adelaide is rather highly-strung and pretty squeamish when something bad happens. I felt sorry for Adelaide, even though sometimes she tended to be annoying in the tale.

The fourth survivor of the luxury yacht is Rio Fanning as Harker, who is the bosun in the story. There’s also Ralph Watson as Ben, the third lighthouse keeper who dies early in ‘Part One’. I’ve found out that Ralph Watson played Captain Knight in ‘The Web of Fear’ with Patrick Troughton.

Tom Baker as the Doctor and Louise Jameson as Leela really get into the nitty-gritty of the story with solving the mystery of the alien menace, lurking among the rocks around the lighthouse. I enjoyed the Doctor and Leela’s interaction together in this tale whilst they are solving a mystery.

I was quite shocked that Tom Baker and Louise Jameson didn’t get on well with each other whilst making this story, according to director Paddy Russell. This did trouble me when thinking about it. But of course Tom and Louise are now good friends when they do the Big Finish audios.

The Doctor’s on fine form in this story. I liked the enigmatic moment he has when telling everyone that the lighthouse is under attack and they might all be dead. The Doctor also gets serious when deaths occur and gets flippant when telling Lord Palmerdale he has ‘no chance’ in the fog.

Leela gets to wear some clothes in this story, compared to the usual savage costume she wears. She’s disappointed when they don’t end up in ‘Brighton’. Don’t worry, Louise! That’ll happen at the ‘Timey-Wimey 1’ convention in 2014! 😀 Leela gets to put her hunting skills into good use in this story.

This story is also the first time we meet the Rutans, who are the enemies of the Sontarans. Beforehand, I’d listened to another Rutan story called ‘Castle of Fear’. I’d also seen clips of the Rutan’s appearance in this tale for the ‘Bred For War’ documentary on ‘The Sontaran Experiment’ DVD.

Although unimpressed by their realisation on screen (the Rutan looks pathetic in my opinion), I rather like an alien monster that can shape-shift into any form. The Rutan soon takes the form of Reuban after he kills him in ‘Part Two’, becoming green and menacing with that wicked smile.

Colin Douglas also provides the voice for Reuben the Rutan when he becomes a green jellyfish before the Doctor. I enjoyed the confrontation between the Doctor and the Rutan in ‘Part Four’. I do think that a green blobby jellyfish that can shape-shift is a perfect enemy for the Sontarans. 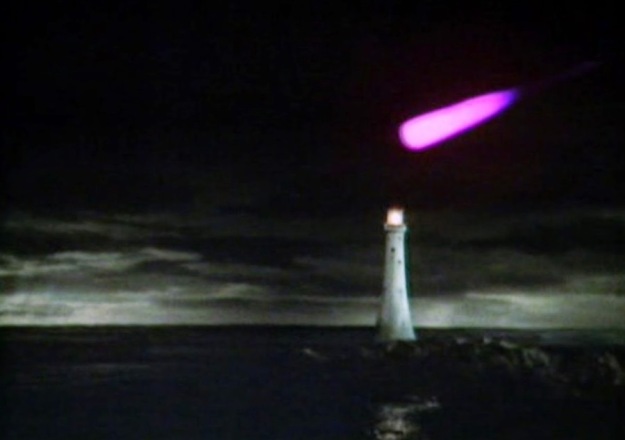 The DVD special features are as follow. The highlight is the ‘Terrance Dicks: Fact or Fiction’ documentary. This charts a general overview of Terrance’s time on ‘Doctor Who’, including being the script-editor of the Jon Pertwee era and his solo ‘Doctor Who’ adventures as a writer. There’s also ‘Paddy Russell – A Life In Television’, which features an interview with the director of this story. There’s also ‘The Antique Doctor Who Show’ which was relaxing and there’s a commentary with Louise Jameson, John Abbot and writer Terrance Dicks. There’s also an info-text commentary to enjoy as well as a photo gallery of the story. There’s also an Easter Egg to look out for on this DVD.

‘Horror of Fang Rock’ is definitely an atmospheric and creepy tale with the Doctor and Leela. It’s certainly good to watch. I wouldn’t rate it as one of my all-time favourite ‘Doctor Who’ stories from the series. But I enjoyed the first appearance of the Rutans in this (well, one Rutan anyway).