This is a ‘Doctor Who’ story atypical of the Phillip Hinchcliffe era!

‘Planet of Evil’ is a four-part story by Louis Marks and is from the second season of Tom Baker’s tenure of ‘Doctor Who’. It’s also a story from Phillip Hinchcliffe’s second season as producer of the show, as he and script-editor Robert Holmes worked together to form a gothic era of ‘Doctor Who’!

This story stars Tom Baker as the Doctor and Elisabeth Sladen as Sarah Jane Smith. I recall having the story on DVD as a present for Christmas in 2009, along with ‘The Ark In Space’; ‘The Talons of Weng-Chiang’ and ‘Horror of Fang Rock’. I was still watching the last of David Tennant’s tenure at the time.

In the story, the TARDIS receives an intergalactic distress call and the Doctor and Sarah Jane go off to answer it. They soon end up on Zeta Minor, a planet on the edge of the known universe. But something’s wrong, as all but one of a scientific expedition has been killed in strange circumstances.

A military spaceship from the planet Morestra arrives in orbit to Zeta Minor to uncover the mystery of the lost scientific expedition. The Doctor and Sarah Jane are easily suspects, but very soon it may be that no-one can escape from the ‘planet of evil’ as something monstrous is about to wreak havoc.

I can’t say that this ‘Doctor Who’ story left an impact on me when I first saw it on DVD. This is due to the fact I couldn’t remember anything about it when it came to re-watching the story for this review. But having re-watched it, I’ve greatly enjoyed the story and seeing the Doctor and Sarah Jane together.

However, I don’t find this to be the best story ever made from the Phillip Hinchcliffe era of ‘Doctor Who’. Don’t get wrong, the jungle planet of Zeta Minor is impressive and the Jekyll-Hyde aspects of the story are interesting. But this turned out to be a pretty average ‘Doctor Who’ adventure for me.

Louis Marks had previously written for ‘Doctor Who’ before with the likes of ‘Planet of Giants’ and ‘Day of the Daleks’. I found ‘Planet of Evil’ an improvement from ‘Planet of Giants’ since it has been made by a production team who can appreciate and value the merits of this tense-driven adventure.

Most of this story was influenced by the 1956 sci-fi movie classic ‘Forbidden Planet’ as well as the story of ‘Dr Jekyll and Mr Hyde’ by Robert Louis Stevenson. I was able to appreciate that aspect of the story when seeing Sorenson becoming the Anti-Man as it’s gradually revealed during the story.

There is also the theme of anti-matter addressed in this story concerning the monsters that appear. Anti-matter has been used in ‘Doctor Who’ before, especially with Omega in ‘The Three Doctors’. The anti-matter is used on a different level as it seems to be a massive part of the evil planet itself.

I especially like the chemistry between the Doctor and Sarah Jane in this ‘Doctor Who’ story. Tom Baker and Elisabeth Sladen gel well together as a TARDIS duo and are both eye-catching to watch. They work well as Sarah Jane’s adventurous spirit matches Tom Baker’s Doctor unstable eccentricity.

Tom Baker is brilliant as the Doctor in this adventure. Sometimes he seems moody and thoughtful when working out what’s happening with the Zeta Minor planet. He becomes insistent on telling the Morestran crew that they’ve got to remove all the canisters of anti-matter off-board their spaceship.

Elisabeth Sladen is lovely as Sarah Jane Smith in this story. Surprisingly, this story was Lis Sladen’s favourite from the show. Now isn’t that interesting?! I don’t consider this a great story for developing Sarah Jane’s character, but Lis had enjoyed working on the jungle sets according to the DVD extras.

Sarah Jane comes across as being brave, especially when she’s concerned for the Doctor and going off to rescue him after he fell into the pit in ‘Part Two’. Sarah Jane also gets mesmerised and senses the Anti-Man’s presence, especially when Sorenson starts changing during ‘Part Three’ of the story.

Frederick Jaeger guest stars as Sorenson, a scientist and the sole survivor of the scientific expedition to Zeta Minor. Sorenson is rather glory-seeking when trying to find a cure for diseases off Zeta Minor. He doesn’t realises he’s bringing back something dangerous and he soon becomes a monster.

The guest cast also includes Graham Weston (who appeared in ‘The War Games’ with Patrick Troughton) as De Haan; Louis Mahoney (who guest starred in the ‘Fawlty Towers’ episode, ‘The Germans’) as Ponti and Michael Wisher (who played Davros in ‘Genesis of the Daleks’) as Morelli.

The jungle planet set in ‘Planet of Evil’ is very impressive indeed. Some of the jungle scenes were filmed at Ealing studios in London and they’re very impressive, especially with the Doctor and Sarah Jane walking through them. The jungle looks so alien, frightening and dangerous to watch on screen. 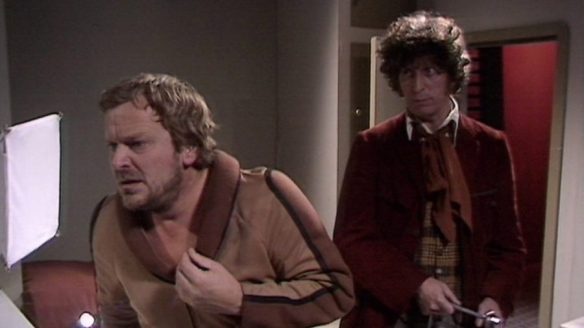 The DVD extras are as follows. There’s the ‘A Darker Side’ making-of documentary and the ‘Planetary Performance’ documentary on the story’s cast. Both these documentaries have behind-the-scenes interviews with the cast and crew. There’s a ‘studio scene’ and a ‘continuities’ compilation to enjoy.

There’s a commentary with Tom Baker, Elisabeth Sladen, Prentis Hancock and producer Phillip Hinchcliffe. There’s also an info-text commentary option to enjoy; a photo gallery of the story; a ‘coming soon’ trailer for ‘Destiny of the Daleks’ with Tom Baker and Lalla Ward and there’s a ‘Radio Times Listings’ PDF of the story. There’s also an Easter Egg to look out for on the first part of the special features menu. 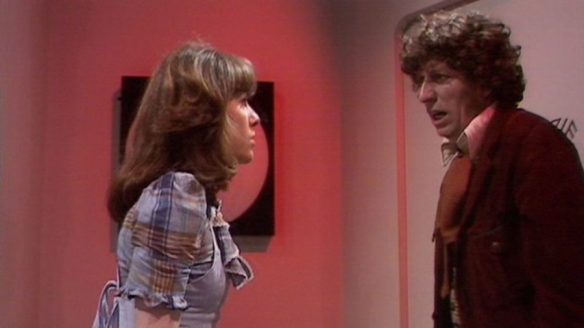 ‘Planet of Evil’ is a fairly average ‘Doctor Who’ story for me. It’s by no means the worst story ever made, but it’s not the best. It’s well-directed by David Maloney and the highlight of this story is Tom Baker as the Doctor and Elisabeth Sladen as Sarah Jane Smith who work well as a ‘Doctor Who’ duo.