This four-part story was originally by Lewis Greifer. Unfortunately his scripts didn’t match to what producer Philip Hinchcliffe had wanted. So script editor Robert Holmes rewrote the scripts from scratch, hence why the story is by the pseudonym Stephen Harris, as Holmes didn’t take all of the credit.

This is a gothic pseudo-historical story like no-other and is very atypical of the Philip Hinchcliffe era of ‘Doctor Who’. There is lots of Egyptology references in this story especially with mummies and a dark god, except all of these aspects are part of an alien culture and a sci-fi approach is applied to it.

In the story, the Doctor and Sarah Jane are on their way back to U.N.I.T. HQ in the 1970s (Now hold on! Please bear this point in mind). On the way back, the TARDIS bumps into some psychic force resembling a dog’s head. The TARDIS ends up in the right place on Earth, but years too early in 1911.

The Doctor and Sarah Jane find themselves in the house of Professor Scarman, where something disturbingly mysterious takes place. Mummies from Egyptian sarcophaguses come to life and Professor Scarman who is now a walking cadaver is about to bring about the reign of the evil Sutekh.

I enjoyed this adventure with the Fourth Doctor and Sarah Jane Smith in it. I’m not one for the gothic era of ‘Doctor Who’ during the 1970s, but I found this story interesting especially with how Robert Holmes adds space elements to the Egyptology. The Egyptian myths turn out to be from outer space.

I’m not very familiar with Egyptian gods like Sutekh or Horus as mentioned in the story, but I enjoyed the idea of Egyptian mummies who appear in the story that turn out to be robots. Also the gothic aspects of the story with Professor Scarman being a living corpse were very disturbing to see in this.

Tom Baker delivers a superb performance as the Doctor in this TV adventure. Sometimes the Doctor does get moody, especially when dealing with the menace of Sutekh. But I enjoyed some of the Doctor’s one-liners and the bonkers’ eccentricity that comes across from Tom Baker’s performance.

Elisabeth Sladen is lovely as Sarah Jane, the Doctor’s companion in this story. I love the white dress that Sarah Jane wears in this adventure, matching the gothic atmosphere of the story. I enjoyed Sarah Jane’s interaction with the Doctor as they bounce off each other and share a great chemistry.

Sarah Jane comes across as being very brave in this story, especially when she hides from robot mummies in ‘Part One’ of the story, although she does tend to scream a bit. She also fires a rifle in this story, which is a bit unusual and out of character for her, but at least she doesn’t shoot anybody.

Bernard Archard guest stars as Professor Marcus Scarman, who unfortunately gets killed during an expedition in Egypt and becomes a walking cadaver to Sutekh. I’ve seen Bernard Archard in ‘Dad’s Army: The Movie’ from 1971 and he also starred in ‘The Power of the Daleks’ with Patrick Troughton.

It was pretty disturbing to see Professor Scarman looking so corpse-like and a willing servant of Sutekh. Bullets can’t kill him as he’s already dead and they fire back out of him. I was impressed with how that scene was shot in reverse as Bernard Archard walking backwards. I wouldn’t have noticed.

Michael Sheard guest stars as Laurence Scarman, Professor Scarman’s brother. I’ve seen Michael Sheard before in other ‘Doctor Who’ stories like ‘Castrovalva’ and ‘Remembrance of the Daleks’ and he’s well-known for appearing in ‘Grange Hill’. Here he plays a tragic character in Laurence Scarman.

The guest cast also includes Peter Copley as Dr. Warlock, Michael Bilton as Collins, George Tovey as Ernie Clements the poacher and Peter Maycock as Namin. All of these supporting characters come to a sticky end whether it’s being crushed by robot mummies or touched to death by Sutekh’s servants. 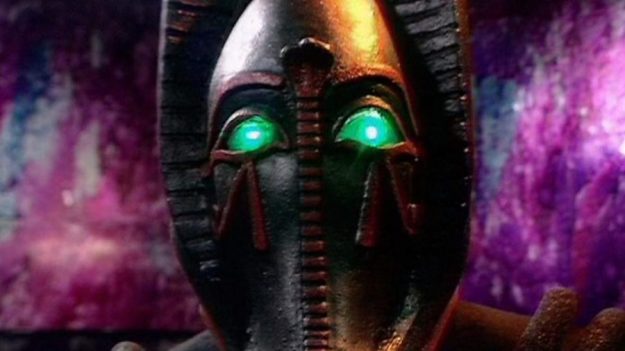 The villain of course is Gabriel Woolf as Sutekh the Destroyer. Sutekh is the last of the Osirians and is known in Egyptian mythology as the god of death. Gabriel Woolf delivers a chilling performance as Sutekh and he has this cool, deep, rich evil voice that sounds so eloquent and disturbing to listen to.

Sutekh is a malicious being who’s trapped in his tomb by Horus of the Osirians and can’t break free through the Eye of Horus. Sutekh wants to break free so that he can cause chaos and destruction. If released, he will destroy all human life as we know it on Earth as the Doctor shows it to Sarah Jane in an alternative ‘1980’.

The robot mummies that feature in this story are impressive. One wonders how they can see through those bandages on their faces, but the mummies serve Sutekh and they’ll destroy anyone who stands in their way. I was shocked when two mummies crushed Clements the poacher to death. 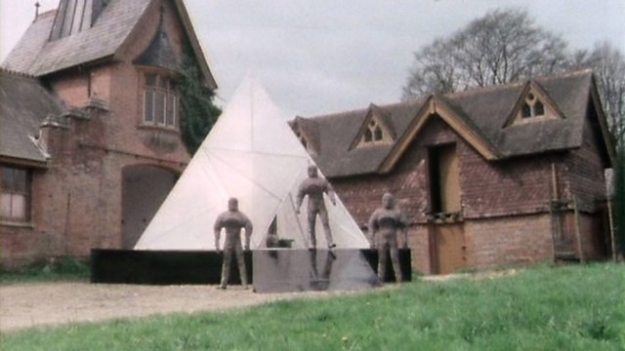 The DVD special features are as follows. There’s the ‘Osirian Gothic’ making-of documentary and the ‘Serial Thrillers’ documentary looking at the Philip Hinchcliffe era. There’s also the ‘Now and Then’ featurette looking at the locations of ‘Pyramids of Mars’ and there are deleted scenes from the story.

There’s an information text commentary option to enjoy and ‘Oh Mummy’, a really funny comedy spoof on Sutekh’s story. There’s also a commentary with Elisabeth Sladen, Michael Sheard and producer Philip Hinchcliffe with occasional comments made by director Paddy Russell. There’s also a picture gallery of the story and an Easter Egg to look for on the special features menu of the DVD.

‘Pyramids of Mars’ is a classic story of the Philip Hinchcliffe era of ‘Doctor Who’ and of the Tom Baker era. I enjoyed the take of Egyptology and mummies by ‘Doctor Who’ in this story and enjoyed Tom Baker’s Doctor and Sarah Jane in it. It’s definitely has that gothic atmosphere that suits the era.