‘THE STONES OF BLOOD’

K9 from ‘The Stones of Blood’ signed by John Leeson (‘Tailwags to Tim from your friend K-9!)

‘The Stones of Blood’ by David Fisher is the third story of ‘The Key to Time’ series. It is a four-part adventure on 1 disc. This is another one of my favourites from ‘The Key to Time’ season and is about a stone circle with stones so hungry for blood.

David Fisher makes his first contribution to ‘Doctor Who’ here. I like David’s stories, as he has a knack for writing very good gripping drama tales with elements of humour and interesting ideas thrown in.

The Doctor and Romana head for Earth in the late 20th century to look for the third segment of the Key to Time. They discover a stone circle in connection to some blood sacrifices and an evil goddess.

The story has a gothic horror feel to it. It would have fitted in the early years of Tom Baker’s era. I’m not familiar with Druids and blood sacrifices, but it’s so disturbing in this familiar earthbound setting.

Tom Baker delivers a superb performance as the Doctor. He lets his curiosity get the better of him, which leads him to get nearly sacrificed. I liked the friendship the Doctor has with Amelia Rumford.

Mary Tamm’s Romana is stunning as ever and she gets to be resourceful. She fares well, despite not having a good sense of shoes and she gets sent to a spaceship in hyperspace where danger awaits. 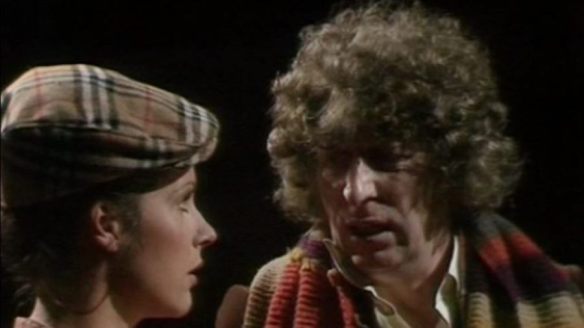 K-9 (voiced by John Leeson) was a joy to see! I liked it when the Doctor summons K-9 to track down Romana. I liked it when Amelia calls K-9 a ‘dear’ and he defends her to the last dog against the Ogri.

The guest cast includes Beatrix Lehmann as Professor Amelia Rumford. Amelia is an endearing and eccentric elderly lady. She becomes a very willing ally when solving the mystery of the stone circle.

Susan Engel guest stars as the villainous Vivien Fay. She starts off as being friendly when she lives with Amelia Rumford. It turns out she’s responsible for the blood sacrifices and isn’t as she appears. 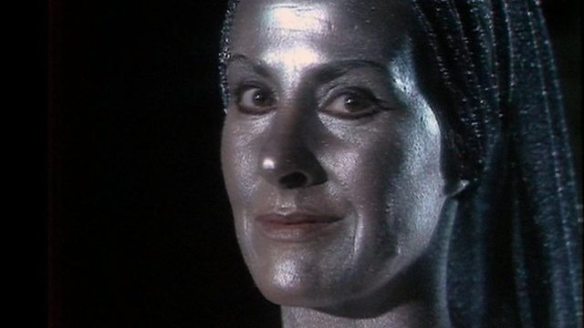 The cast also includes Nicholas McArdle as Mr De Vries and Elaine Ives-Cameron as his wife Martha who are Druids. There’s also James Murray and Shirin Taylor as a couple of campers who get killed in ‘Part Three’.

The moving stones are the alien Ogri. I’m impressed with these believable stone monsters. I’m very glad that director Darrol Blake decided not to have actors in cumbersome rock-suits to play the Ogri.

The story features the Megara, alien justice machines, which I found pretty appalling in visual terms.

It turns out that the third segment of the Key to Time is a pendant that Vivien Fay wears in the story.

The DVD special features are as follows. There’s the ‘Getting Blood from the Stones’ making-of documentary with cast and crew interviews. There’s the ‘Hammer Horror’ documentary and ‘Stones Free’ with Mary Tamm. There’s also deleted scenes; continuities and ‘Model World’ with Mat Irvine.

There are two commentaries. The first one is with Mary Tamm and director Darrol Blake. The second one is with Tom Baker; Mary Tamm and Susan Engel. There’s an info-text commentary option; a ‘Blue Peter’ item and a ‘Nationwide’ cast interview; a photo gallery of the story and ‘Radio Times Listing’ PDF of the story.

There’s a coming soon trailer for ‘Planet of Evil’ with Tom Baker and Elisabeth Sladen.

‘The Stones of Blood’ is a great ‘Doctor Who’ story by David Fisher. I’m not one for gothic horror, but I found this a very enjoyable tale with the Doctor; Romana; K-9 and sausage sandwiches of all things.

‘DOCTOR WHO – THE STONES OF BLOOD’

Getting More Blood From The Stones

This was an exciting audiobook for me when I purchased it on holiday in York 2011!

‘The Stones of Blood’ is one of my favourite stories from ‘The Key To Time’ season of ‘Doctor Who’ with Tom Baker and Mary Tamm. I hold fond memories of this story when I first saw it on DVD. I even used ‘The Stones of Blood’ as inspiration to write my first fan-fiction tale, ‘The Railway of Time’.

Surprisingly, this was novelization/audiobook is by David Fisher, the original author of the TV story. This was a surprise for me, as I didn’t think he novelized the story back in the 70s. ‘The Stones of Blood’ was first novelized by Terrance Dicks for the Target novelization range of ‘Doctor Who’ books.

David Fisher has novelized for the Target range of ‘Doctor Who’ before, since he novelized ‘The Creature From The Pit’ and ‘The Leisure Hive’. It’s surprising he never novelized ‘The Stones of Blood’ and ‘The Androids of Tara’ back then, but it’s good he’s made up for that in both stories for 2011-12.

The reader for this novelization/audiobook is Susan Engel, who played Vivian Fay in the ‘Doctor Who’ story. I was delighted to hear Susan read this story and he’s a really good narrator, as she captures you into the story. She delivers her narration of the story with such emotion and enthusiasm in this.

I don’t think Susan does really good impersonations of the characters in the story like the Doctor, Romana and Professor Rumford. But she does manage to capture the tone of their voices as well as getting the range of emotions of what they’re going through as they experience events of the story.

As well as Susan Engel, there’s also John Leeson who does the voice of K-9 during the story. It was nice to have John Leeson voice K-9 during the novelization/audiobook, making it almost like the Big Finish Companion Chronicles; ‘The Lost Stories’ and the ‘Destiny of the Doctor’ audios in some ways.

John Leeson occasionally pops in and out when voicing K-9 during the story. Hearing K-9’s tinny voice when he has lines of dialogue with the Doctor, Romana and Professor Rumford was easily amusing and enjoyable to hear. Most of K-9’s lines in the audio are similar to what was shown in the TV story.

In the novelization/audiobook, David Fisher makes use of his research in developing the world he’s created in ‘The Stones of Blood’. This includes the history of Bodcombe Moor, the Druids’ involvement in the story and the stone circle that becomes a prominent plot device during the story.

Chapter 1 of the story is basically a history of Bodcombe Moor as well as the Tor featuring the stone circle. It was also so intriguing how Vivian Fay placed herself throughout history at Bodcombe Moor in her various guises, which include Morgana Montcalm, Señora Camara and of course the Cailleach.

I love how David Fisher develops the characters of the Doctor and Romana during this story. He’s very good in developing on how they reflect on certain events of the story, before moving onto the next part of the story very easily and with such pace. He develops Romana’s curiosity of Earth nicely.

I also like how he developed the relationship between Amelia Rumford and Vivien Fay in the story. There’s a brief history given on how Amelia and Vivien first met each other when attending a university. It adds more depth and touches on how Amelia gets shocked about Viven’s true identity.

There are a lot of feminist attitudes being developed from Amelia and Vivien Fay during the novelization/audiobook. This was touched on during the TV story, but it’s enhanced when exploring the characters’ thoughts and feelings. This occurs especially through Amelia’s opinions of the Doctor.

The development of Leonard De Vries as a character was interesting to listen to during the audiobook. This was especially interesting when I found out that De Vries and Martha weren’t married as I assumed they were in the TV story. But it’s clearly indicated Martha loves De Vries here.

An interesting point to note is that the deleted scenes from the story on the DVD are included in the novelization/audiobook. This was a delight to listen to and I’m glad David Fisher reinserted them into the audiobook. This included the extended scene with De Vries and Martha getting killed by an Ogri.

There’s also the sequence where Vivien Fay as the Cailleach takes De Vries and Martha’s blood from their corpses to give to the Ogri stones. I can see why this wasn’t shown in the TV story as it revealed Vivien’s identity too quickly. It was pretty disturbing when the Ogri were actually drinking the blood.

It’s interesting during the story that the mansion owned by De Vries is a sort of school for the BIDS (British Institute of Druidic Studies). David Fisher clearly indicates that students of Druidism come to the mansion to study, as De Vries makes out to the Doctor that he was visiting during the quiet time.

The Megara in the novelization/audiobook are a huge improvement compared to the TV story. David Fisher had reverted them back to being silver globed spheres compared to the awful blinking lights that they were in the TV version. This made them more convincing and so easy to visualise on audio.

In the novelization/audiobook, the Doctor uses the pedant that he stole from Vivien Fay to send the Megara off back to their ship in hyper-space. This was shown in the TV story, but it wasn’t very clear. It also makes sense, since Vivien’s pendant does happen to be the third segment of the Key to Time.

The novelization/audiobook ends with the Doctor leaving Romana to put the three segments of the Key to Time together and fetching a chessboard for him and K-9 to play chess with. This leads very nicely into the next story, ‘The Androids of Tara’, which is of course what David Fisher penned next.