Running From The Tax Man 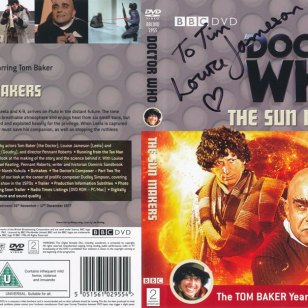 Tim Bradley with Louise Jameson at the ‘Bournemouth Film and Comic Con 2015’, August 2015

I enjoyed watching ‘The Sun Makers’ by Robert Holmes, featuring Tom Baker’s Doctor with Leela and K-9. It’s a slightly comical and politically plot-driven four-part story about a future human society where they’re being taxed to death. Robert Holmes had been made to pay his taxes by the local Inland Revenue.

This was something he was angry about and he set out to write a tale that is essentially a satire on the tax situation that occurred in the 1970s. Now I don’t pretend to understand everything about inflation; the obsessive trouble with money and how politics were involved. But it was so interesting. 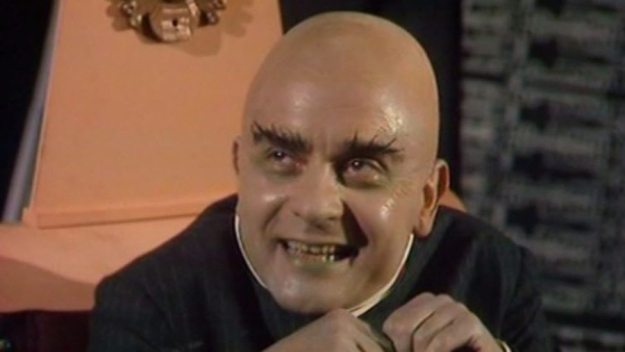 This is Louise Jameson’s favourite ‘Doctor Who’ story and I’m so pleased that I’ve had the DVD cover of ‘The Sun Makers’ signed by Louise at the ‘Project Motor Mouth 2’ convention in Slough, August 2013. I have met Louise a number of times at conventions and find her extremely warm and friendly.

So what happens in ‘The Sun Makers’ then? Well the story is about the Doctor and Leela visiting Pluto, the ninth planet of the Solar System. Now you expect this planet to be freezing cold, don’t you? But it isn’t, as the planet happens to be surrounded by six suns. Six suns! That’s incredible, hey? 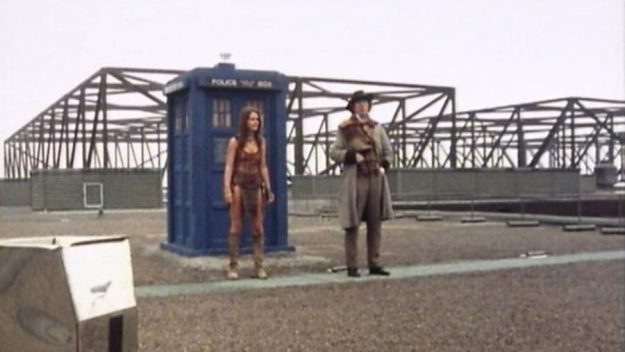 The planet is pretty law-restricted on people paying taxes and it’s a horrifying notion, especially as you wonder how and why the planet’s gone in this state. There’s a private corporation rather than a government going on behind all these political events. Some people like Cordo suffer from the laws.

Some of the Pluto humans manage to survive by going underground and steal without paying. These human bandits are a pretty violent bunch as the Doctor discovers. This progresses the story to go forward for the human society to rebel against the law makers and especially the inhuman Collector.

It’s interesting that this Louise Jameson’s favourite ‘Doctor Who’ story, as it contains lots of political themes in it. It is also because Robert Holmes wrote it and writes well for Leela. Holmes understands Leela inside and out. It was nice to see Leela have her own adventure and have her own voice in this.

I enjoyed it when Leela protested to the Doctor that she tried to warn him about the time rotor stopping in the TARDIS. I found it a great character moment when Leela showed compassion and tried to stop Cordo from committing suicide by falling into the city drop before the Doctor stops her.

I liked it when Leela shows how brave she is and she approves of Cordo offering to help her. I found it so amusing when the Doctor manages to get Leela to sleep as he hypnotises a guard before waking her up. Leela unfortunately goes through a public death by steaming before the Doctor rescues her.

Tom Baker’s Doctor stands out for me in this story. Tom definitely shows his confidence and eccentricity throughout. He manages to cope with the violent tendencies of the bandit gang underground and I like it when he offers Cordo a jelly belly, even though it’s a liquorice allsort!!! 😡

The Doctor encourages the underground victims to ‘help themselves’ by forming a rebellion against the company. I liked it when the Doctor is in a correction centre and he manages to short circuit a machine that’s going to torture him, electrocuting a worker in the process. He tried to warn him! 😀

K-9 (voiced by John Leeson) features properly in this story, following his absence in ‘Image of the Fendahl’. I liked that scene when K-9 plays chess with the Doctor and Leela. The Doctor is rather dismissive of the metal dog at the beginning as he tells K-9 to stay put in the dog house (the TARDIS).

But K-9 won’t stay and like any dog, after a while, goes out in search of the Doctor and Leela. This gets on the Doctor’s nerves, but he soon puts K-9 to good use when they rescue Leela from the steam chamber. K-9 is also put to good use by Leela when he stuns some guards with his nose laser.

Roy Macready guest stars as Cordo. I like this little man that the Doctor and Leela meet. He seems to be the heart and soul of the story and is willing to join in the fight against the tax men. Cordo gets on well with Leela, as they share an interesting bond with each other. Leela calls him ‘the bravest man’.

David Rowlands guest stars as Bisham, who the Doctor meets in the correction centre. I liked it when Bisham gets freed and he joins Leela and Cordo down the P45 (!) return route. Bisham is very knowledgeable about what goes on with Pluto and its tax systems, especially as he helps the Doctor.

Richard Leech guest stars as Gatherer Hade. I liked Richard’s pompous performance as Hade, as he enjoys getting people to pay him taxes. He’s very pompous when he looks over and ‘pom-pe-poms’ away with his balance sheet. He’s unforgivable for his unsympathetic and full-of-himself behaviour.

Henry Woolf guest stars as the alien-like Collector. I’ve seen Woolf in an episode of ‘Steptoe & Son’ and in the BBC version of ‘The Chronicles of Narnia: Prince Caspian’. The Collector is a crazy character who thinks only of tax quotes. It seems over-the-top, but it is a very enjoyable performance.

There’s also the lovely Jonina Scott as Marn, who works for Gatherer Hade. The rebels include William Simons as Mandrel, the leader of the group; Michael Keating (who would later star in the sci-fi series ‘Blake’s 7’) as Goudry and Adrienne Burgess (who is a friend of Louise Jameson’s) as Veet.

In terms of the violence in this story, it’s pretty comical in places. The rebel characters certainly seem to have a violent edge to them, especially where they’re threatening the Doctor and Leela. Even Leela threatens people to use violence on them since that is a part to her savage nature in character.

It was pretty shocking and equally amusing when Gatherer Hade gets thrown off a building, plunging to his death and the workers and rebels are jolly pleased about it, cheering their heads off. The violence and jokes are balanced throughout the tale, especially with a political theme attached to it.

The DVD special features are as follows. There’s the making-of-documentary ‘Running From The Tax Man’ and a trailer for the story. There’s also ‘The Doctor’s Composer – Part Two’ interview with music composer Dudley Simpson (‘Part One’ is on ‘The War Games’ DVD); some outtakes and a photo gallery of the story.

There’s a commentary with Tom Baker, Louise Jameson, Michael Keating and the late director Pennant Roberts and there’s an info-text commentary option to enjoy. There’s also a ‘Radio Times Listings’ PDF of the story and a ‘coming soon’ trailer for the ‘Day of the Daleks’ Special Edition DVD with Jon Pertwee and Katy Manning. 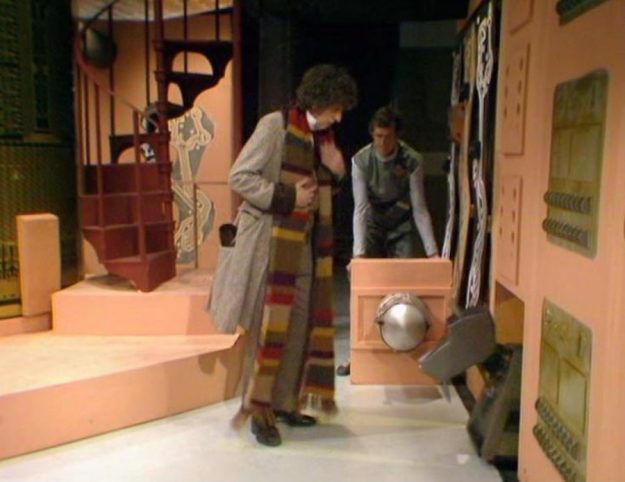 ‘The Sun Makers’ has been an intriguing and enjoyable ‘Doctor Who’ story. I enjoyed the Doctor, Leela and K-9 and it’s a fascinating tale by Robert Holmes on his reaction to the Inland Revenue and taxes. It’s pretty comedic in places, but it’s also very strongly situated in this serious social and political issue of the 1970s.