‘BAD WOLF’/’THE PARTING OF THE WAYS’

This is a two-part story by Russell T. Davies. The final two episodes of Series 1 are brilliant by comparison. It’s a very well-written story by RTD with some brilliant directorial work by Joe Ahearne.

The plot and character development featured in this two-parter is great. The first episode is the beginning of Christopher Eccleston’s final showdown as the Doctor. As he would say, it’s ‘fantastic’!!!

Set in the future of 200,100, this is a sequel to ‘The Long Game’. The Doctor thought he solved the problems of Satellite 5 and the Fourth Great and Bountiful Human Empire. But he’s only made it worse.

The first episode has the Doctor, Rose and Jack taken out of time and put into these reality TV game shows. The Doctor is in ‘Big Brother’, Rose is in ‘The Weakest Link’ and Jack is in ‘What Not To Wear’.

But these games are with a deadly difference. You get disintegrated whenever you get evicted or voted off. Of course, this is all some huge set-up as a massive Dalek fleet is ready to invade the Earth.

I enjoyed these two episodes so much that I couldn’t help but watch them again and again. I enjoyed the ‘game show’ parts of ‘Bad Wolf’ which were really exciting, amusing and very frightening to watch. 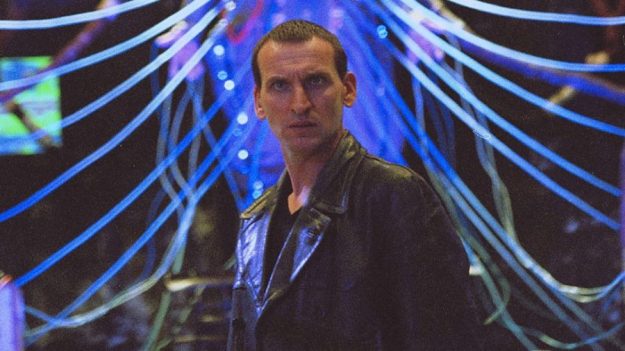 Satellite 5 is now called the Game Station. Instead of broadcasting news to the world, it now broadcasts TV game shows for people to watch on Earth. What’s happened to the Earth is disturbing.

‘The Weakest Link’ is now hosted by the Anne Droid (which I found funny). The Anne Droid is voiced by Anne Robinson herself and she blasts contestants into atoms when they’re voted off one by one.

There are some wonderful guest stars in this episode. Each supporting character is involved in a game show on TV and it’s horrifying that no-one has stopped them if it means the end of their lives.

Jo Joyner of ‘Eastenders’ fame guest stars as ‘sweet little’ Lynda with a ‘y’, not with an ‘i’. I like Lynda who meets the Doctor in ‘Big Brother’. She could have been a potential companion to the Ninth Doctor.

Paterson Joseph guest stars Roderick, who goes against Rose in ‘The Weakest Link’. He was friendly to Rose at first, but then keeps her in the last round so that he can win the game and she’d be killed.

As well as Anne Robinson; there’s also Davina McCall voicing the Davinadroid in ‘Big Brother’ and Trinny Woodall voicing Trine-e and Susannah Costantine voicing Zu-Zana in ‘What Not To Wear’. 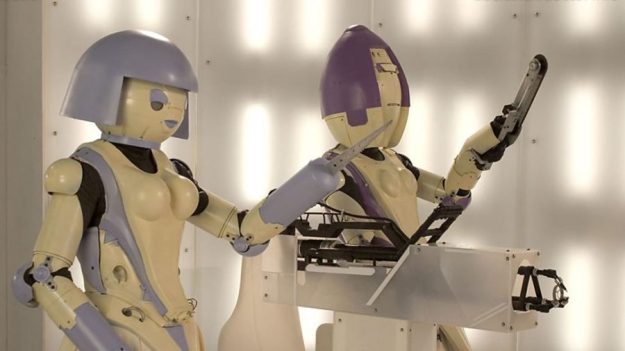 I found that scene where Rose was in the final round for ‘The Weakest Link’ tense, as the Doctor; Jack and Lynda are on their way to rescue her. It was upsetting when she lost and got disintegrated.

The Doctor is clearly upset when he loses Rose and believes her to dead. Chris’ performance is powerful, sublime and mesmerising, as he keeps silent and doesn’t answer during the interrogations.

But it turns out Rose is still alive and the Doctor and Jack are overjoyed. But where has Rose ended up? She’s on a Dalek ship and in trouble, held captive. Rose is terrified when she sees it’s the Daleks.

The cliff-hanger for the first episode was exciting. The moments where the Doctor finds out that there are two hundred Dalek ships in space and the Doctor defies the Daleks to save Rose was so mesmerising.

‘The Parting of the Ways’ is an exciting showdown with an epic battle in it. The Doctor and Jack thankfully get to rescue Rose when going aboard the Dalek ship that has her on it, using the TARDIS.

I enjoyed the confrontation on the Dalek ship, as the Doctor, Rose and Captain Jack meet up with the Emperor of the Daleks. The design and look of the Dalek Emperor is impressive and mesmerising.

The talented Nicholas Briggs does a fine job voicing the Daleks in this story, including the Emperor himself. The scene where the Emperor claims himself to be ‘the god of all Daleks’ was pretty disturbing. 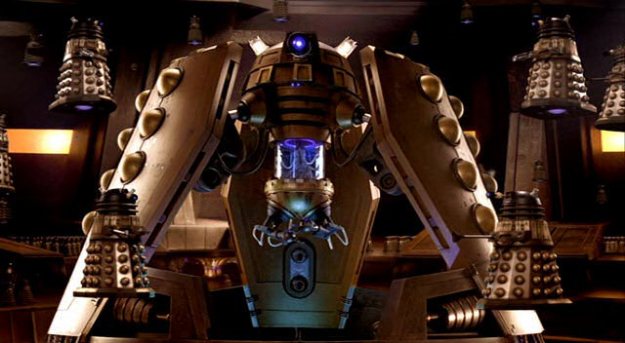 Eventually, the scene is set for war as the Dalek armada invades Earth and attacks the Game Station. The battle sequences where the Daleks exterminate the humans aboard the station were tense to watch.

The Doctor however sends Rose back to her home time on Earth to be safe and away from all the danger. But Rose wants to be with the Doctor and she tries to find a way to get back, using the heart of the TARDIS.

Back in the future, the Daleks massacre the humans. It was shocking when the Daleks killed the game contestants on the station and it was very sad when Lynda got killed by the Daleks in the end.

As I said before, this is the last episode to feature Christopher Eccleston as the Ninth Doctor. It’s such a shame as he was ‘fantastic’. I hope this isn’t the last we’ll ever see him as he was my first Doctor.

This episode is also the last regular appearance of John Barrowman as Captain Jack Harkness. Jack gets killed and reborn again before he goes off to appear in ‘Torchwood’, but that’s for another day.

Camille Coduri and Noel Clarke make return appearances as Jackie Tyler, Rose’s mum and Mickey Smith, Rose’s ex-boyfriend. It was nice to see them appear in this second episode, especially as this was the finale for Series 1. 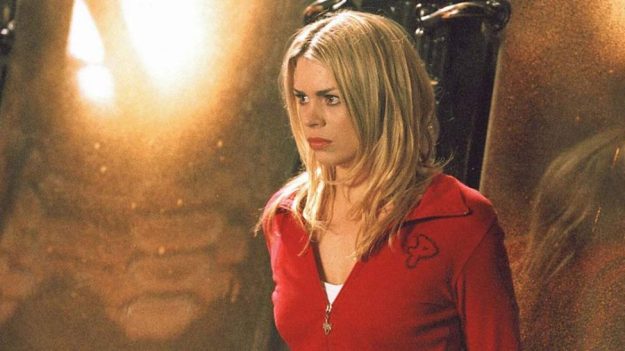 Rose manages to get back to the future by opening the heart of the TARDIS. This is something she shouldn’t have done since she absorbed the time vortex inside her head and she becomes the ‘bad wolf’.

She arrives in time to save the Doctor and destroys the Daleks and the Emperor by wiping them out using the time vortex. But the time vortex energy becomes too much for her and it begins to kill her.

The Doctor however manages to save Rose. With one kiss, he manages to take the time vortex energy out of her and he fills himself with it, sending it back into the TARDIS. But this costs him his life.

The TARDIS leaves with the Doctor and Rose on board. The Doctor is slowly dying and has to ‘change’ to cheat death. The Doctor says goodbye to Rose and tells her that she was ‘fantastic’ as well as him.

The regeneration takes place and the Doctor changes from Christopher Eccleston into David Tennant. Rose is shocked and surprised, wondering who this new man is and if he truly is the Doctor.

‘The Parting of the Ways’ ends Series 1 of new ‘Doctor Who’ on a high. It’s one of my favourite stories from the Christopher Eccleston era of the TV show and as the Doctor would say, it’s ‘fantastic’!!! 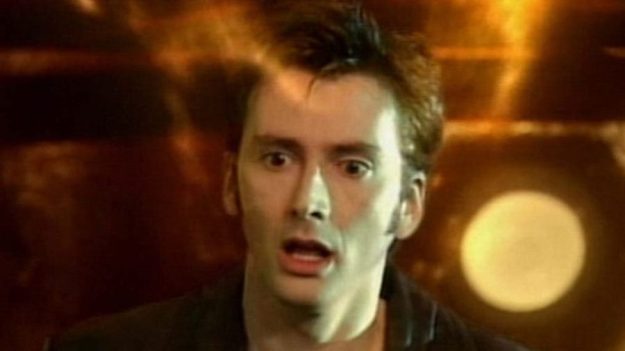 The DVD/Blu-ray special features for this story are as follows. There’s an audio commentary on ‘Bad Wolf’ with executive producer/writer Russell T. Davies, executive producer Julie Gardner and producer Phil Collinson and there’s an audio commentary on ‘The Parting of the Ways’ with Billie Piper; John Barrowman and executive producer Julie Gardner. There’s the ‘Doctor Who Confidential’ episode ‘The World of Who’ for ‘Bad Wolf’ and there’s the ‘Doctor Who Confidential’ episode ‘The Last Battle’ for ‘The Parting of the Ways’. I was pleased to see Christopher Eccleston being interviewed for ‘Doctor Who Confidential’ as he rarely gets interviewed and he seems to be enthusiastic about playing the Ninth Doctor. There are trailers for ‘The Parting of the Ways’ and for ‘The Christmas Invasion’. There’s the ‘Designing Doctor Who’ documentary as well as an interview with John Barrowman called ‘The Adventures of Captain Jack’. There’s also an ‘Easter Egg’ to look out for if you know where to find it. There’s also a ‘Doctor Who Confidential’ episode called ‘Backstage at Christmas’, which features an exclusive behind-the-scenes look at ‘The Christmas Invasion’ with David Tennant, featuring an interview with David as well as some highlights from the Christmas Special.

To sum up, ‘Boom Town’ and ‘Bad Wolf’/’The Parting of the Ways’ have been brilliant to watch and enjoy. They conclude Series 1 of ‘Doctor Who’ brilliantly and rightly so with some brilliant scripts by Russell T. Davies and some wonderful direction by Joe Ahearne. I’m privileged to have seen these!

Here’s to the Christopher Eccleston era of ‘Doctor Who’!