‘DAUGHTER OF THE GODS’

Daleks with the First and Second Doctors, Jamie, Zoe, Steven and Katarina

This is a ‘Doctor Who’ story I didn’t know I wanted, but one I most definitely needed! 🙂

I love ‘Daughter of the Gods’. It’s one of the best multi-Doctor adventures I’ve ever come across by Big Finish! It’s a fantastic four-part adventure featuring the First Doctor as played by William Hartnell and the Second Doctor as played by Patrick Troughton with friends Jamie, Zoe, Steven and Katarina.

In many ways, this can be considered as what could’ve been the 5th anniversary story of ‘Doctor Who’. In fact, Big Finish made a ‘Radio Times’ cover to emphasise that fact. I would’ve loved it if the TV series did a multi-Doctor story like this back in 1968 with William Hartnell and Patrick Troughton featured in it.

‘Daughter of the Gods’ is by David K Barnes. He previously wrote ‘The Dalek Occupation of Winter’ with the First Doctor, Steven and Vicki and I heard good things about it. This was my first experience of an ‘Early Adventure’ by Big Finish and I’m happy to say it was a really satisfying, thrilling experience.

The story also features Ajjaz Awad as Katarina. Sadly, Adrienne Hill who played Katarina in the TV series passed away in 1997. It’s a shame, but thankfully Ajjaz Awad provides a convincing voice for Katarina from the TV series. It did make feel that Katarina was there in the story whilst listening to it.

The Daleks also make an appearance in the story which was pretty exciting to listen to. The basis of the story comes from ‘The Daleks’ Master Plan’ where the Second Doctor, Jamie and Zoe enter into an alternative timeline where Katarina is alive and she, the Doctor and Steven didn’t stop the Daleks.

It happens when Zoe tries to reattach an old piece of TARDIS equipment to the console unit. But soon, the TARDIS nearly collides with another TARDIS in the time vortex. After escaping the collision, the Second Doctor, Jamie and Zoe find themselves on the world of Urbinia where a big crisis ensues.

Before long, Jamie is separated from the Doctor and Zoe before he runs into looters before eventually running into Katarina. The Doctor and Zoe meanwhile meet Steven, who is a pilot helping to evacuate Urbinia as it is being invaded by Daleks. They also see the First Doctor on a view-screen.

It’s interesting how this story unravels and develops with plenty of enjoyable and nourishing pieces of character drama. It’s what I like in a ‘Doctor Who’ story and it was fun to hear the first two Doctors interacting with each other as well as Jamie and Katarina and Steven and Zoe. Very exciting!

I like how this story provides this alternative take of what could’ve happened had the First Doctor, Steven and Katarina not gone to Kembel and stopped the Daleks’ plans for the Time Destructor. Repercussions ensue, especially when the Daleks’ Time Destructor weapon is put into deadly effect.

The heart of the story is on Katarina’s place in the TARDIS. She’s a short-lived companion who only appeared in five episodes of the TV series from the end of ‘The Myth Makers’ into the first quarter of ‘The Daleks’ Master Plan’. A lot of hard choices are made to ensure the stability of the universe here.

One of the joys of ‘Daughter of the Gods’ is hearing Peter Purves as William Hartnell’s Doctor interacting with Frazer Hines as Patrick Troughton’s Doctor. The two actors sound like the Doctors they worked with on TV, giving exact impersonations, making me think they’re in the room together.

I love how Patrick Troughton’s Doctor’s journey plays out in the story. After escaping a collision, he’s very angry with Jamie and Zoe for tampering with the TARDIS. He’s curious about what’s occurring on Urbinia and is shocked to see Steven for the first time as well as see his previous self on a screen. 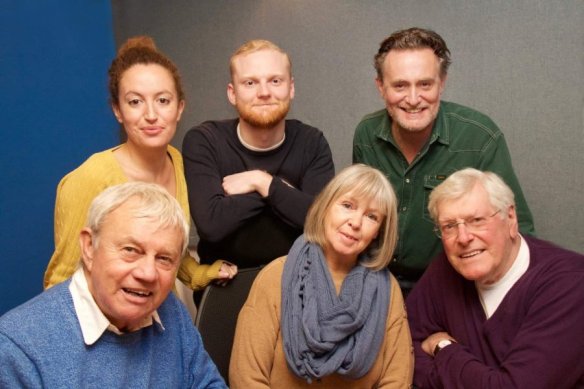 It was great to hear William Hartnell’s Doctor and how he was having an alternative life on Urbinia. I liked it when he was having breakfast before being visited by Steven and I liked his scenes with Katarina in ‘Part Two’. The First Doctor soon gets really concerned when the Daleks are about to invade Urbinia.

I enjoyed Jamie’s story and how he copes on his own for a bit before running into looters like Varx and Piril. His relationship with Katarina is interesting, as the two share a lot in common with knowing the Doctor and how they treat them. They also come from two different periods of Earth’s past here.

It was interesting when Jamie offered to give himself and Katarina up in order to avoid getting killed before being used as bait by the Daleks. Jamie is one who encourages finding another way to not let Katarina die, not being aware of the consequences of what could happen if things stayed as they are.

It was great to hear Zoe in this adventure. Zoe is apologetic for messing things up when trying to avoid colliding with the First Doctor’s TARDIS in the time vortex. She spends a lot of time with her Doctor before meeting Steven and assisting him when they work to evacuate the people of Urbinia.

Zoe manages to surprise the First Doctor with her unique skills of working out formulas faster than anyone. She’s anxious thinking the First Doctor doesn’t like her but Steven reassures her. I like how she and Steven work together to rescue Jamie and Katarina and prevent the Daleks attacking them.

It was interesting to hear how Steven ended up in this alternative timeline. Steven now works as a pilot on Urbinia. He, the Doctor and Katarina have lived there for a few months. He’s quick into assisting the people of Urbinia evacuate as the Daleks are about to invade and destroy the Kiria City.

Steven is befuddled as to what’s going on when he meets the Second Doctor and Zoe and is even more befuddled when the two Doctors are together. He’s shocked about what will happen to Katarina when the timeline’s corrected. Steven is determined not to go down without a fight in the story.

Ajjaz Awad as Katarina in ‘Daughter of the Gods’.

Katarina’s character gets explored in this story as she seems to be of the opinion that she’s meant to die. She shares this with the First Doctor and Steven when she’s been having nightmares and even shares this with Jamie. But she’s not an altogether gloomy character. She still has faith in the Doctor.

I like how Big Finish have explored Katarina’s character compared to the limited amount of time she had in the TV series. She comes across as being far nobler than any ‘Doctor Who’ companion I’ve ever realised, especially when she talks to the Second Doctor and is willing to sacrifice her life in this.

The Daleks, voiced by Nicholas Briggs, are chilling as ever. I got a sense that the Daleks sounded a lot like the ones from the 1960s Dalek TV stories, which is as it should be. It was interesting to hear how advanced these Daleks were with utilising the Time Destructor to deadly effect in this altered timeline.

The Time Destructor is now able to destroy planets and people like Urbinia’s neighbouring planet Baralda. The Daleks are cunning and ruthless, especially when they use Jamie and Katarina as bait for the people of Urbinia to surrender. It’s interesting how they discover the two Doctors are the same.

The cast also includes Laura Elphinstone as Captain Parlos, who is in charge of the security forces of Urbinia. There’s also Ian Crowe as the rather cowardly Chancellor Atrias of Urbinia as well as looter Varx and fellow worker Krell that Steven forms a good friendship with. There’s also Max Keeble as second looter Piril; First Citizen Togrok of the planet Baralda and a sergeant on the planet Urbinia. 🙂

‘Daughter of the Gods’ has been a brilliant multi-Doctor audio adventure in the ‘Doctor Who’ series. I like how the story gets resolved in the end and it’s been very satisfying how the Second Doctor, Jamie and Zoe meet the First Doctor, Steven and Katarina in an altered timeline where Daleks attack.

The CD extras are as follows. On Disc 1, there are two tracks of incidental music to enjoy. On Disc 2, there’s a trailer for ‘The Home Guard’ with Frazer Hines, Anneke Wills and Elliot Chapman. There are also behind-the-scenes interviews with the cast and crew including Peter Purves, Frazer Hines, Wendy Padbury, Ajjaz Awad, producer David Richardson, director Lisa Bowerman, etc.