Beware the Roses with the Second Doctor, Jamie and Zoe

I’ve greatly enjoyed ‘The Rosemariners’ with the Doctor, Jamie and Zoe!

I purchased this four-part story on a 2-disc CD in February 2013 to celebrate the Patrick Troughton era of ‘Doctor Who’ for the 50th anniversary. After enjoying ‘Prison In Space’ so much, I was looking forward to getting back into the world of the Second Doctor era and back into the feeling of late 1968.

I wasn’t disappointed. I enjoyed Frazer Hines doing his authentic personation of Patrick Troughton’s Doctor again as well as him playing Jamie with Wendy Padbury playing Zoe. It was a delightful treat. Although not matching the same style as ‘Prison in Space’, this was an engaging, captivating adventure to follow.

The story is by Donald Tosh. Donald Tosh?! Yes, that’s right! Donald was ‘Doctor Who’s script editor in the TV show’s third season with William Hartnell from 1965 to 1966. He’d written this story in mind for Patrick Troughton’s Doctor with Jamie and Zoe. Sadly, he didn’t get to develop the tale any further.

It was shelved for many years until ‘Doctor Who Magazine’ suggested to Donald Tosh that he send his story to Big Finish for ‘The Lost Stories’ range. He readily submitted it. Big Finish happily welcomed Donald Tosh’s story. Everyone was aboard to see this lost story turned into a Big Finish audio with good results.

‘The Rosemariners’ has the TARDIS arrive on Space Station 454. I was almost going to say 456, but that’s ‘Torchwood’, isn’t it? 😀 The Doctor, Jamie and Zoe meet Professor Arnold Biggs, who is a xeno-biologist that has this interest in floral plants. The floral plants include roses and orchids on the station.

The Doctor shows an interest in the Professor’s work before the two men are taken to the planet Rosa Damascena where the green skinned Rosemariners live. The Doctor and the Professor are forced to find a cure for a certain thing called ‘rose dream’ under Commander Rugosa. The seeds of a conspiracy here.

There are also the seeds of a dastardly plot to rule the universe involving some deadly roses. Can the Doctor and his friends stop the Rosemariners in time? I was pretty captivated with this tale, wanting to know what was going on and how the Doctor, Jamie and Zoe were going to tackle the ‘roses’ problem.

Donald Tosh’s inspiration for this story came about when he was building a rose garden at his home during the time he devised this story in the 1960s. I like Donald’s use of a rose garden and the floral plants as a deadly danger. It makes for a pretty creepy and disturbing ‘Doctor Who’ adventure indeed.

I had no idea roses were so deadly when unsupervised. They’re so beautiful, lovely and seductive with their scent. And that was the point of Donald’s story and how he involves the Rosemariners in using them. It’s a pretty frightening concept of roses sucking you in and trapping you within its vine-like grip.

This is especially the case when Colbert gets devoured and killed in ‘Episode One’ as well as Jamie getting trapped and caught in the vines and being poisoned by thorns during ‘Episodes Two and Three’. I can only imagine how effective this story would’ve been had it been shown on the TV screens.

I was thrilled to hear Frazer Hines and Wendy Padbury being the narrators for this story as well as playing the Doctor, Jamie and Zoe. This story follows the same pattern as to how ‘Prison In Space’ was performed with some narration in the third person and the dialogue being said by the characters in it.

With the addition of David Warner and Clive Wood as the guest stars, the story feels more full-cast than usual compared to a ‘Companion Chronicle’. This makes a nice change and feels very refreshing when you listen to the story. This served as the basis for what ‘The Early Adventures’ audios would be. 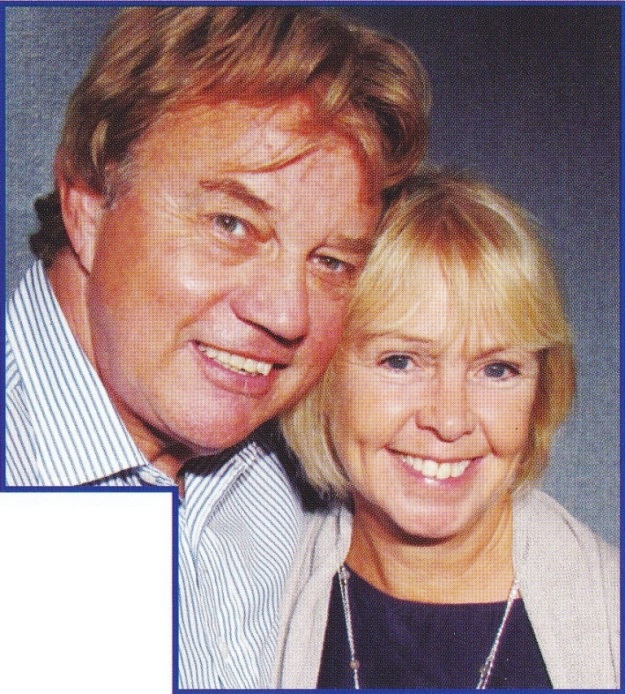 Frazer Hines and Wendy Padbury in ‘The Rosemariners’.

I’ve enjoyed Frazer Hines playing the Second Doctor in these Big Finish audios. Frazer does a very good interpretation of Patrick Troughton’s Doctor, as I’m sure I’ve said before in other reviews. It makes me feel that Patrick is there in the Big Finish studios recording this audio tale with his fellow cast members.

I liked it when the Doctor walked in and discovered Jamie and Zoe tampering with the TARDIS as they land. I also liked the Doctor interacting with Biggs and the two spark off each other since David Warner engages with Frazer’s interpretation of Patrick’s Doctor as they talk about orchids; xeno-biology and such.

I enjoyed how the Doctor suspects something’s wrong with Rugosa, Colbert and the whole situation during the story. I did find the Doctor to be more serious in this adventure rather than the impish clown he tends to be in other stories. There are traces of humour to be found with Frazer playing him.

Frazer is equally good as Jamie in this adventure. I liked the first comedic moment featured in the TARDIS when Jamie tried to press a switch on the TARDIS console and inadvertently caused it to land, getting him in trouble. Jamie shares more scenes with Zoe as they leave the Doctor and Biggs together.

Jamie gets to wear a prison guard’s uniform and even wears trousers which is surprising. He gets to more curious in this adventure, despite his lack of scientific knowledge. His curiosity gets the better of him once he’s caught by one of the rose plants and has thorns poisoning him. Thankfully he survives.

It was great to hear Wendy Padbury in this audio adventure. She’s lovely as Zoe and gets to share a lot of scenes with Jamie for the first two episodes. Jamie and Zoe discover the missing scientists who have been locked away by the Rosemariners and they both discover them with headsets and bracelets.

Zoe tries to compliment Jamie on him wearing trousers, which doesn’t work so smoothly as she hoped. Zoe is the one who screams and calls out to the Doctor, telling him that Jamie is in trouble when the rose plants attack. Zoe also gets into trouble as she has to bluff to Colbert and decode some messages.

I enjoyed it when Wendy got to play Zoe and Colbert in the same scene. Yes that’s right! Wendy plays another character in this story! Colbert is the chief executive officer of Earth Station 454 and has a French accent. I found it interesting Frazer didn’t voice Colbert since Wendy’s playing a male character.

But then Wendy currently lives in France, so it makes sense as she’s picked up the French accent. She does a very good French accent for Colbert. It was horrific when Colbert got killed, being devoured by the rose plants. It was very disturbing when a Colbert duplicate appeared to bluff Biggs and the Doctor.

David Warner and Clive Wood in ‘The Rosemariners’

I was thrilled to hear David Warner as Professor Arnold Biggs. David’s a brilliant veteran actor who I’ve seen in two ‘Star Trek’ films including ‘Star Trek V’ and ‘Star Trek VI’. He also did a two-part ‘TNG’ story; has done a number of ‘Doctor Who’ audios with Big Finish and did ‘Cold War’ with Matt Smith.

I’ve also met David Warner at conventions. Hearing him in this ‘Doctor Who’ audio adventure was an absolute treat. I like the character he plays in this. Biggs is a good guy when the Doctor, Jamie and Zoe meet him. His knowledge of plants and xeno-biology gets put to good use in escaping a tricky situation.

I also enjoyed Clive Wood as Rugosa. Clive has been in the ‘Doctor Who’ TV series, playing a Roman commander in ‘The Pandorica Opens’. Here he plays a different commander who is an alien and a rather villainous character. Rugosa is one of the Rosemariners who lures Colbert to get killed by plants.

Rugosa gets the Doctor and Biggs to work for him as he wants them to find a cure for this ‘rose dream’ the Rosemariners seem to be suffering from. We unravel layers about Rugosa’s true nature in terms of who he is and why he’s using the plants to take over the universe. I like Clive’s deep sinister voice for Rugosa.

There are several references to previous Dalek stories in this adventure. The Doctor tells Jamie and Zoe about the Daleks responsible for the Mary Celeste ship featured in ‘The Chase’. There are also some deadly plants featured in this story that come from the planet Kembel in ‘The Daleks’ Master Plan’.

Since Donald Tosh script-edited the mammoth 12-part Dalek adventure on TV during his time on Season 3 of ‘Doctor Who’, it’s only right that he should include those Dalek story references. And they’re very nice references to those Dalek stories too. I liked connecting the whole thing together. 🙂

The CD extras are as follows. At the end of Disc 2, there are behind-the-scenes cast and crew interviews on ‘The Rosemariners’. They include Frazer Hines; Wendy Padbury; David Warner; Clive Wood and director Lisa Bowerman, conducted by producer David Richardson.

‘The Rosemariners’ is a very enjoyable ‘Doctor Who’ adventure that was a pleasure to hear. It kept me captivated throughout. It’s not as good as ‘Prison In Space’ in my opinion, but Donald Tosh writes a really engaging story that evokes the Patrick Troughton era and with Frazer Hines and Wendy Padbury.

It was great to hear Frazer and Wendy narrate this adventure as well as play the characters of the Doctor, Jamie and Zoe. David Warner and Clive Wood as guest stars was also great too. You can’t go wrong there. I came away happy from listening to this adventure and I’m very sure you’ll be happy too.

2 thoughts on “‘The Rosemariners’ (Audio)”