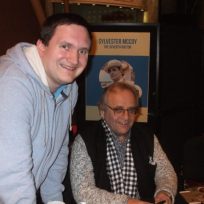 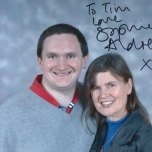 Tim Bradley with Sophie Aldred at the ‘Timey-Wimey 1’, Brighton, November 2014

This is the reunion that ‘Doctor Who’ fans have been waiting for! 🙂

‘1963: The Assassination Games’ is a thrilling ‘Doctor Who’ audio adventure by Big Finish, starring Sylvester McCoy as the Seventh Doctor, Sophie Aldred as Ace, Simon Williams as Group Captain Gilmore, Pamela Salem as Rachel and Karen Gledhill as Allison. It’s the third story of the 1963 trilogy.

I’ve had the CD cover of ‘1963: The Assassination Games’ signed by Sylvester McCoy at the ‘Science of the Time Lords’ event in Leicester, January 2016 and by Sophie Aldred, Karen Gledhill, Hugh Ross and the writer John Dorney himself at the ‘Timey Wimey 1’ convention n Brighton, November 2014.

I like the CD cover with the Doctor and Ace’s profiles adorned on it and with Group Captain Gilmore, Rachel and Allison walking at the bottom of the cover. I also like 1960s London with Big Ben in the background. But I still prefer the CD cover for ‘1963: Fanfare For The Common Men’ over this story’s.

‘The Assassination Games’ is another addition to celebrate 50 years of ‘Doctor Who’. It also serves as a nice follow up to ‘Remembrance of the Daleks’ where the Doctor and Ace reunite with the Counter-Measures team. This is a four-part story by John Dorney, who delivers an intriguing, political thriller.

This story takes place during Season 25 of ‘Doctor Who’. It also takes place at the end of November 1963, after ‘Remembrance’ and before Series 1 of ‘Counter-Measures’ begins. The Doctor and Ace works undercover and have help from the Counter-Measures team when they have to stop Starfire.

I did get a sense of a political atmosphere in this story, especially when the Counter-Measures team, the Doctor and Ace interacted with political characters. It didn’t make it action-packed as ‘Remembrance’ was and this felt a lot like a ‘Counter-Measures’ episode than a ‘Doctor Who’ story.

But I liked how the Doctor and Ace were fitting into this 1960s political environment as well as working undercover. The episode starts slowing with the story mainly focusing on the Counter-Measures team. The Doctor and Ace don’t get actively so involved until the second half of the story.

Sylvester McCoy is great as the Doctor in this adventure. It must have been extraordinary for Sylvester to make a ‘Doctor Who’ story celebrating 50 years of the show. I’m sure he and Sophie Aldred enjoyed their reunion with Simon Williams, Pamela Salem and Karen Gledhill for this drama.

In this story, Sylvester’s Doctor goes undercover by the name of John Rutherford. I like how Sylvester’s Doctor gets to proactive and working in the background for this story. He shares a lot of scenes with Group Captain Gilmore and is so determined to find out what the mystery of Starfire is.

Sophie Aldred is equally great as Ace in this adventure. I’ve got on well with Sophie over the years when I see her at ‘Doctor Who’ conventions. She’s a really nice lady and puts in so much enthusiasm into her character of Ace. I like how Sophie regains the Season 25 version of Ace in this audio drama.

In this story, Ace goes undercover as a maid in Sir Gideon Vale’s mansion and uses her real name ‘Dorothy’. I like Ace’s reunion with Rachel and how they get to find out more about what’s going on as they go down into the basement of that house. Ace gets to gun-ho and feisty as ever in this story.

Simon Williams returns as Group Captain Gilmore in this adventure. I enjoyed how the Group Captain gets to reunite with the Doctor. He’s first saved by him when a madman named Ritchie almost shoots him and the Doctor steps in the way. Gilmore also sees the Doctor as John Rutherford.

Gilmore is gobsmacked and speechless when he and Sir Toby Kinsella meet the Doctor as John Rutherford. I like how Gilmore puts his trust in the Doctor and shows more respect to him compared to ‘Remembrance’. He also gets to be the action man and has also written his memoirs in the future.

Pamela Salem returns as Professor Rachel Jensen. At this point, Rachel isn’t keen to return to Counter-Measures. She made that claim in ‘Remembrance’ when determined to leave and go back to Cambridge. This is before she takes over Counter-Measures as its leader in its own spin-off series.

Karen Gledhill returns as Allison Williams. I’ve met Karen at the ‘Timey Wimey 1’ convention and she was very nice to me. I’m sure she enjoyed her reunion with Sylvester and Sophie as well as with Simon and Pamela. It must have been surreal for Karen to do this whilst she did ‘Counter-Measures’.

In this adventure, Allison gets to go undercover as well in an extremist organisation. She unfortunately gets brainwashed into killing Gilmore and Rutherford who turns out to be the Doctor. Thankfully she’s snapped out of it by the Doctor, before she gets caught again and tied up in the tale.

Hugh Ross guest stars as Sir Toby Kinsella, who would become the fourth member of the Counter-Measures team in their spin-off series. I’ve met Hugh Ross at the ‘Timey Wimey’ convention and he was a pleasant chap to talk to. I enjoyed chatting to him on his appearance in ‘Monarch of the Glen’.

In this story, Sir Toby is portrayed as an influential political liaison for the Counter-Measures team. He shares a number of scenes with Gilmore as they talk about the Starfire project. He’s unaware that John Rutherford is really the Doctor. This is until the Doctor reveals himself to him in an emergency.

The CD extras are as follows. At the end of Disc 1, there’s a suite of incidental music to enjoy. It does feel action-packed and thriller style to suit the political atmosphere of this story. It’s more in tone with the music style of ‘1963: The Space Race’ instead of the ‘1963: Fanfare For The Common Men’ music.

I enjoyed listening to Sylvester, Sophie, Simon, Pamela and Karen share their memories of working together in ‘Remembrance of the Daleks’ and how they’re happy to be reunited for this audio story. I also liked it when Sophie shared how she was pleased to be part of ‘Doctor Who’s 50th anniversary. 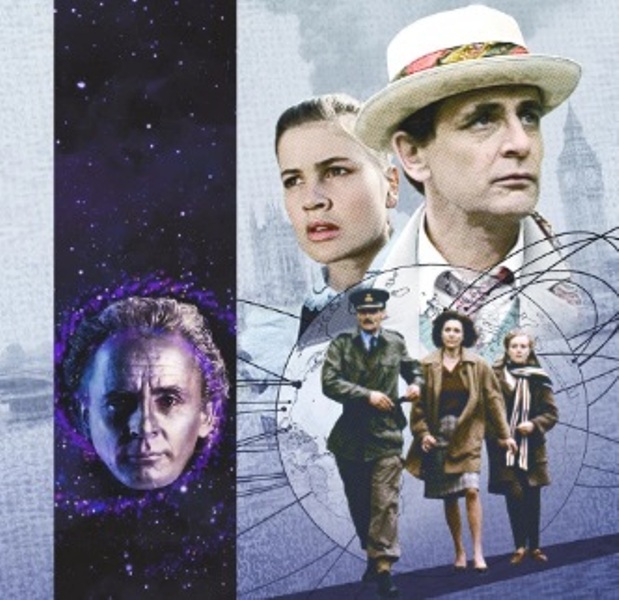 ‘1963: The Assassination Games’ has been a great audio adventure to listen to with the Seventh Doctor and Ace reunited with the Counter-Measures team. I assume this is the only time this will happen, but I’m glad this was done to celebrate 50 years of ‘Doctor Who’. The story felt politically driven and was thriller-like. I’m glad I’ve been able to listen to this story for a second time to review.