The Master returns with the Doctor and Ace

‘Dust Breeding’ is a four-part adventure by Mike Tucker and the third audio adventure with the Doctor and Ace from Big Finish. I enjoyed listening to this audio as it’s full of mystery and drama throughout and has a pretty spooky and creepy atmosphere to enhance the listening experience.

Mike Tucker previously wrote for the Seventh Doctor and Ace in ‘The Genocide Machine’ with the Daleks. Mike writes very well in his stories and knows the Doctor and Ace inside out, due to knowing Sylvester McCoy and Sophie Aldred very well. So it was a pleasure listening to another story by him.

This adventure has the Doctor and Ace visiting the barren dust world of Duchamp 331. A colony of artists are there and the Doctor investigates a mystery regarding the famous painting called ‘The Scream’ that is deemed to be destroyed. This leads him into facing old friends as well as old enemies.

The atmosphere and the tone of this audio adventure is pretty eerie and creepy indeed. It also has an arty-quality to it, especially when discovering more about the mysterious ‘Scream’ painting and how it affects the Doctor; Ace and everyone else. The unravelling of this mystery is pretty exciting.

This ‘Doctor Who’ adventure stars Sylvester McCoy and Sophie Aldred as the Seventh Doctor and Ace. It also guest stars Caroline John and Geoffrey Beevers who work together for the second time in the history of ‘Doctor Who’ as husband-and-wife (the first time being ‘The Ambassadors of Death’).

Sylvester McCoy as the Doctor is brilliant and he certainly delivers the ‘darker aspects’ of his Doctor very well in these audio adventures. I liked how his Doctor works things out regarding the art colony; the Scream painting and the dust. He gets a surprise when he finds out who the real enemies are.

The Doctor has a keen interest in the art world throughout this story. I liked the reference made to the Doctor having one of the Mona Lisas from ‘City of Death’. I also liked it when he mentions having pieces of art to Ace. The Doctor connects the items of art to the ‘dust breeding’ so intriguingly well.

Sophie Aldred as Ace is equally brilliant. Sophie manages to pitch the right level of youthfulness into Ace whilst developing the character in the audio stories. Ace gets to handle things on her own whilst she’s concerned for the Doctor. She also gets scared when the Scream painting strangely attacks her.

I’ve met both Sophie Aldred and Sylvester McCoy at ‘Doctor Who’ conventions recently. I’m pleased I’ve met both of them. Sophie is very lovely and nice to chat when I meet her at conventions, and Sylvester is easily funny when he’s on stage and interacting with the fans during his interview panels.

Caroline John guest stars as Madam Salvadori in this audio adventure. Caroline is well-known as Liz Shaw with Jon Pertwee’s Doctor. It was great to listen to Caroline. She plays a wealthy art dealer with a Russian accent. She suspects Mr Seta when he’s involved in the art dealings on Duchamp 331.

Geoffrey Beevers returns as Mr Seta in this adventure. Mr Seta is actually an anagram, as it turns out he’s the Master in this audio story. I was thrilled to find Geoffrey reprise his role as the Master from playing him in ‘The Keeper of Traken’. Hearing Geoffrey’s Master’s villainous silky voice was a treat. 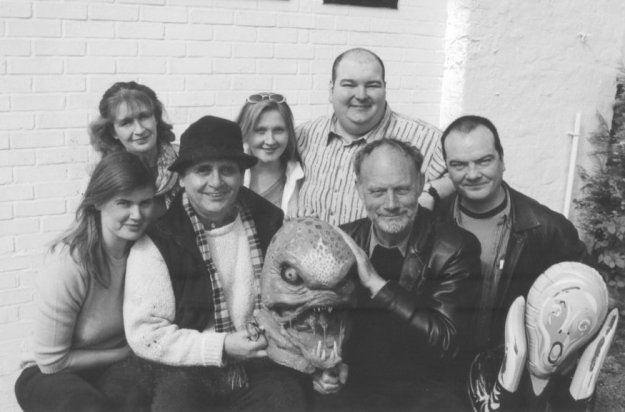 The Doctor and Ace previously faced the Master when he was Anthony Ainley in ‘Survival’. This is the same Master following on from that story. The reason why the Master isn’t wearing his Tremas body and has reverted back to his old decaying-corpse form from ‘The Deadly Assassin’ is explained here.

I found the interaction between the Master and Madame Salvadori very intriguing and surreal to listen to. To hear both Geoffrey and Caroline as husband-and-wife in both the same scene and acting together was exciting. It’s scary when the Master mocks and mistreats Madame Salvadori at times.

The monsters in this adventure are the alien Krill. The Doctor and Ace have met these monsters before in the BBC novel ‘Storm Harvest’ (also co-written by Mike Tucker). From listening to this audio adventure, the Krill are savage super-weapon monsters that you don’t want to meet on a dark night.

The Krill in ‘Dust Breeding’.

I found it interesting for this ‘Doctor Who’ story to feature the painting, ‘The Scream’ by Edvard Munch. Seeing ‘The Scream’ reminds me of the Silence monsters from the new series of ‘Doctor Who’. ‘The Scream’ becomes a pivotal threat in this story, especially with regard to the Master’s plans.

‘Dust Breeding’ is a great audio adventure with the Seventh Doctor and Ace. It features superb guest performances from Caroline John and Geoffrey Beevers as the Master. This is a treat of an audio adventure and it is worthy to add to your ‘Doctor Who’ collection, with the Master and the Krill in it.

The CD extras are as follows. At the end of Disc 2, there’s a coming soon trailer for the ‘Doctor Who’ audio adventure ‘Bloodtide’ with Colin Baker’s Sixth Doctor and Maggie Stables’ Evelyn Smythe.