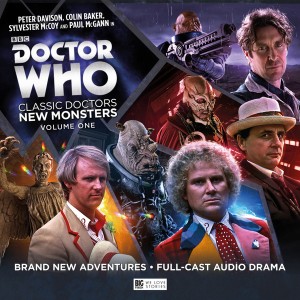 ‘HARVEST OF THE SYCORAX’

Sycorax with the Seventh Doctor

The third episode of the first ‘Classic Doctors, New Monsters’ box set is ‘Harvest of the Sycorax’, starring Sylvester McCoy as the Seventh Doctor. As the title states, the Doctor confronts the Sycorax.

I enjoyed this episode very much. I don’t think it’s the best episode from the first ‘Classic Doctors, New Monsters’ box set collection. But I found it entertaining and enjoyable to hear with the Sycorax.

The Sycorax made their first TV appearance in ‘Doctor Who’ in ‘The Christmas Invasion’, which also saw David Tennant making his debut as the Tenth Doctor. It was so fun to hear the Sycorax on audio.

It was also great to have an episode where Sylvester’s Doctor deals with the Sycorax, as they are monsters who are a good match for him. They also have some interesting ‘blood control’ in this one.

‘Harvest of the Sycorax’ is by James Goss. James has contributed hugely to the world of ‘Doctor Who’ through books and audios. He is currently the showrunner for ‘Torchwood’ through Big Finish.

It’s easy to mistake the Sycorax as a warrior race from watching ‘The Christmas Invasion’. It becomes clear during this audio episode that the Sycorax are space gangsters and they’re very dishonourable.

In this episode, the Doctor visits the human race in the far future at a medical facility called the Blood Bank. The Sycorax have taken over and they’re controlling humans as ‘cattle’ via blood control

The Doctor meets a woman called Zanzibar Hashtag (?!), who seems to be about to commit suicide. Persuading her out of it, the Doctor acquires Zanzibar’s help in order to defeat the Sycorax’s control.

The future for humanity is interesting if not unsettling. There’s the Pharma Corps where humanity becomes dependent on medication, relying on pads informing them what their emotional levels are.

I like many of the motifs taken from ‘The Christmas Invasion’ to identify the Sycorax. As well as the blood control, there’s also the Sycorax language that is very hard and untranslatable to understand.

There are also the forms of combat through using swords made by the Sycorax. As in ‘The Christmas Invasion’, the Sycorax are very ruthless, merciless and without compassion towards the human race.

Sylvester McCoy is great as the Doctor in this audio adventure. It’s made clear already that the Seventh Doctor has met the Sycorax before. He also seems to know what the Sycorax are capable of.

There is a moment when the Doctor allows himself to be captured and seemingly under the control of the Sycorax. But he uses it to his advantage, especially when he fights Zanzibar for single combat.

Nisha Nayar guest stars as Zanzibar in this episode. Many ‘Doctor Who’ fans will know Nisha Nayar for playing the Female Programmer in the two-part adventure, ‘Bad Wolf’/’The Parting of the Ways’.

Zanzibar acts like a one-off companion for the Seventh Doctor in this adventure. She has an interesting journey here, from relying on her info pad till she refuses to take any of her medication.

Jonathan Firth guest stars as Cadwallader in this episode. Yes, he’s the younger brother of Colin Firth and has starred in plenty of TV dramas e.g. ‘Middlemarch’ and in ‘Victoria & Albert’ as Prince Albert.

Cadwallader is a Pharma Corps executive. He is a pompous man who takes pride in the company’s achievements. It becomes so clear in the episode that he’s a coward when he accompanies Zanzibar.

There’s also Rebecca Callard as Shadrak, who Zanzibar begins to fall in love with in this episode. Rebecca Callard has also starred in the ‘Doctor Who’ episode, ‘A Perfect World’, with Peter Davison.

Giles Watling (Deborah Watling’s brother) guest stars as the Sycorax Chief in this episode. I enjoyed Giles’ performance, as it matches Sean Gilder’s Sycorax performance from ‘The Christmas Invasion’.

‘Harvest of the Sycorax’ is a very enjoyable audio episode with the Seventh Doctor facing the Sycorax. It was interesting to hear how they were depicted on audio. I hope it’s not the last of them.

2 thoughts on “‘Harvest of the Sycorax’ (Audio)”