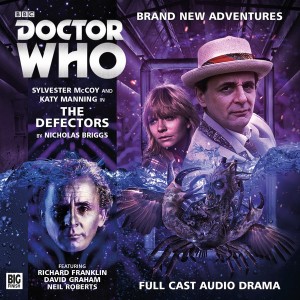 Third Doctor Adventure with the Seventh Doctor and Jo

Jo meets the Doctor! Not the Doctor she was expecting!

‘The Locum Doctors Trilogy’ is interesting in that it features the main range Doctors in Big Finish, Peter Davison, Colin Baker and Sylvester McCoy, in earlier Doctor adventures with earlier companions in them. This is strange however, as the story arc works backwards from Seven to Five. 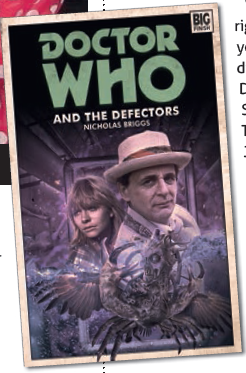 I wondered why Sylvester McCoy’s Doctor had swapped places with Jon Pertwee’s Doctor in this adventure and why he can’t remember or have any explanation. I later discovered in the CD extras that it gets answered in the last story of the trilogy. I needed to be patient before hearing that one.

‘The Defectors’ is a four-part story and it begins with Jo at U.N.I.T. HQ being visited by regular army officer Captain Cornelius. He demands that Jo accompanies him on a matter of ‘national security’. Jo goes to fetch the Doctor, but she finds him different and not the Doctor that she’s regularly used to.

I love the references made to classic Third Doctor stories in this adventure when Jo is unsure whether to trust this stranger to her and tests him whether he truly is the Doctor. I liked that Jo remembers the events of ‘The Three Doctors’, since this adventure takes place sometime after that.

Nicholas Briggs writes and directs this Third Doctor audio adventure with the Seventh Doctor and Jo in it. I liked the atmosphere featured in this story, as it does feel like a Jon Pertwee/U.N.I.T. action adventure. The Third Doctor TV theme music emphasises this story comes from that specific era.

I was keen to find out why the Doctor and Jo were being escorted by Captain Cornelius to this remote Delphin Island and what this business of ‘national security’ was all about. The Doctor and Jo are treated rather poorly, since they’re given stale beer and rotten food when they stay at the pub.

Sylvester McCoy and Katy Manning work well together as the Doctor and Jo in this adventure. It’s an interesting combination, since both are able to deliver both comedic and poignant touches to their character relationships. I laughed when the Doctor does startle Jo at times as he comes up behind her.

Sylvester McCoy’s Doctor isn’t as manipulative in this ‘Doctor Who’ story as he seems to be in other stories. In fact, he’s clearly comedic and acting the clown. This would suggest that this story takes place sometime during his early period as the Doctor, perhaps during either Season 24 or Season 25.

Katy Manning is lovely as Jo Grant in this story. I love Jo Grant! I’m glad that this story takes place during her travels with the Doctor and not after. It’s interesting how Jo reacts to the Doctor having changed his face as the Seventh Doctor. She doubts whether to trust him or believe he is the Doctor.

I enjoyed it when Jo had her own adventure in this story, as she gets separated from the Doctor and almost gets drowned in blue goo before she gets rescued by Hedgerton. The climatic TARDIS scenes were very dramatic between Jo and the Doctor, as she sacrifices herself to save him and the TARDIS. 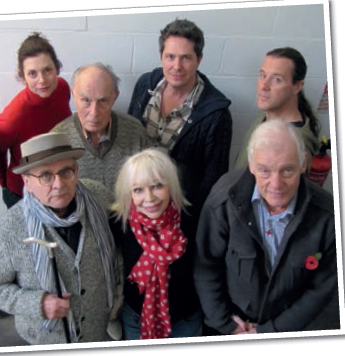 David Graham guest stars as Hedgerton, the tormented engineer who rescues Jo on Delphin Island. David is well-known as the voice of Brains in ‘Thunderbirds’ and he voiced the Daleks in ‘Doctor Who’ in the 60s. It was nice to hear David in this audio drama, as he plays a self-suffering character in this.

Richard Franklin returns as Captain Mike Yates in this audio adventure. I must admit, I was disappointed with Mike Yates’ lack of appearance in this audio. He only appears in ‘Episode One and Four’; he’s not so well-written as in other stories and he’s basically the Brigadier-role for this story.

Neil Roberts (who was in ‘The Land of the Dead’) guest stars as Captain Cornelius and Barnaby Edward guest stars as Commander Wingford. Both these men aren’t what they seem when they recruit the Doctor and Jo to Delphin Island. They’re ‘the defectors’, since they’re under alien control.

There’s also Rachel Bavidge as Claire and Jez Fielder as Jeremiah, the couple who run the pub on Delphin Island. They’re also not what they seem, since they give bad beer and rotten food to the Doctor and Jo upon their arrival to the island. It’s odd when they seem dead and yet walking about.

The monsters for this story are the Europans (voiced by Rachel Bavidge and Jez Fielder). I found these aliens rather hard-going and didn’t find them threatening at all. It’s interesting they come from one of Jupiter’s moons and that they’re victims of the humans, but their voices grated on me in this.

I was fascinated with the backstory of how the Europans came to Earth on Delphin during the 1950s and that during that time, Cornelius; Wingford and Hedgerton don’t age and have blue skin. I’d liked to place this story in the 70s. But Jo said the 50s was more than 30 years ago. We won’t go into that!

‘The Defectors’ has been an enjoyable, nostalgic adventure with the Seventh Doctor and Jo. I enjoyed the combination between Sylvester McCoy and Katy Manning in this one. It evokes the Jon Pertwee atmosphere in this story and it does get interesting when things unfolded on what is going on.

I was curious about what was going to happen next in ‘The Locum Doctors Trilogy’ and why the Seventh, Sixth and Fifth Doctors had swapped places with earlier Doctors. Who was behind this, I wondered.

The CD extras are as follows. At the end of Disc 1, there is a suite of incidental music to enjoy. At the end of Disc 2, there are behind-the-scenes interviews with cast and crew, including Sylvester McCoy; Katy Manning; Richard Franklin, writer/director Nicholas Briggs; Neil Roberts; Barnaby Edwards; etc. There is also a trailer for ‘Last of the Cybermen’ with Colin Baker, Frazer Hines and Wendy Padbury.

If you subscribe to Big Finish for ‘The Defectors’ via a 6 or 12 CD/Download subscription, you’ll get the following extras. There is a PDF script and extended extras of ‘The Defectors’.