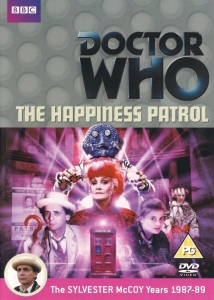 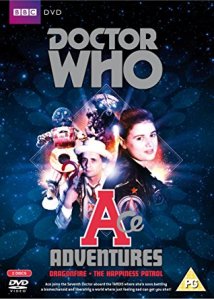 ‘The Happiness Patrol’ is a three-part adventure by Graeme Curry. It takes place on the planet Terra Alpha. It’s this world where it’s a crime to be unhappy and where everyone wears smiles all the time.

The Doctor and Ace visit the planet and find people are killed off by the Happiness Patrol under the rule of Helen A. Can our heroes stop this ‘happy’ dictatorship and can they sort out the Kandy Man?

Okay, let me get this out of the way. I find this story dull. Straight to the point, I found this ‘Doctor Who’ story hard-going. I appreciate the political message and that it was trying to reflect the 1980s.

But honestly, I didn’t find anything exciting about this story. The concept of ‘unhappiness is a crime on an alien planet’ is interesting. But I didn’t feel any emotional drama featured throughout this one.

Also the set-up of the world in ‘The Happiness Patrol’ feels rather silly. And I don’t mean it in a fun sort of way like you’d get with ‘The Horns of Nimon’, even though it could be like a comedic adventure.

The writer Graeme Curry makes a deliberate attack on the Thatcher government of the UK in the 1980s with this story. A fascinating approach, but I found it difficult to invest myself to appreciate it.

It doesn’t help that the Happiness Patrol themselves are girls wearing daft pink costumes and having pink hair. You can say they come from a 1980s cartoon show like ‘Jem and the Holograms’ at that time.

Anyway, Helen A has the most appalling dress sense as well as the most horrendous hair style. Her clothes are red and her hair is red. The make-up she has on her face is overdone and so unflattering.

In fact, many characters in ‘The Happiness Patrol’ have overdone make-up on their faces. I put it to you, would you take these colourful characters seriously in a political situation? I don’t think I would.

Which leads me onto the Kandy Man (laughs). I’m sorry, I had to laugh. But the Kandy Man is daft as a ‘Doctor Who’ monster. Would you truly be threatened by someone who looked like liquorice allsorts?

In fact, why is it just liquorice allsorts with the Kandy Man? Why couldn’t they have added a bit of chocolate to him? Apparently the sweet company Bassetts laid a complaint about the Kandy Man! 😀

Another thing about the Kandy Man is that he’s always angry. Seriously, every time I hear him speak he’s always shouting angrily. I guess David John Pope was getting frustrated with the costume.

So yeah, the Kandy Man is not what I would call a great ‘Doctor Who’ monster in the series. If you want a better version of the Kandy Man, you’d better have ‘Willy Wonka & The Chocolate Factory’.

Sylvester McCoy delivers a good performance as the Doctor in this story. I like how the Doctor challenges against Helen A’s regime and how he tries to find a way to disrupt the evil on Terra Alpha.

You can clearly see that Sylvester’s Doctor is being manipulative and dark by this point in the series. That scene where the Doctor tempts the snipers to shoot him and look him in the eye was so tense.

I also like that last scene between the Doctor and Helen A where he tells that happiness is nothing without sadness. That for me is defining moment in the story, so well-performed by the two actors.

Sophie Aldred is great as Ace in this adventure. I don’t think that this is a strong story for Ace’s character, but I like the moments when she defies Helen A’s regime as well as the Happiness Patrol.

She gets angry when the Happiness Patrol kills people and wants to fight back. She makes friends with Lesley Dunlop (who was in ‘Frontios’) as Susan Q, who’s gone against Helen A’s ‘happy’ regime.

I agree with Sophie Aldred’s comments in the ‘Happiness Will Prevail’ DVD documentary. This story should have been shot in black-and-white. At least that would have made it more interesting.

There’s also Tim Barker as Harold V and Richard D. Sharp as Earl Sigma. And there’s…John Normington (who played Morgus in ‘The Caves of Androzani’ with Peter Davison) as Trevor Sigma!!!

I don’t think the sets are very impressive in this story. It’s supposed to be a city of some sorts, but all the time I felt like we were underground. It would have been nice to have seen some daylight in this.

The music felt interesting in ‘The Happiness Patrol’. Sometime it ranged from melancholy music played by Earl Sigma on his harmonica to Sylvester’s version of ‘As Time Goes By’ from ‘Casablanca’.

The DVD special features are as follows. There’s a making-of documentary called ‘Happiness Will Prevail’ with some cast and crew interviews. There are also deleted and extended scenes to enjoy. There’s an interesting documentary called ‘When Worlds Collide’ which explores ‘Doctor Who’ and politics. It has behind-the-scenes cast and crew interviews. There’s also a photo gallery of the story. There’s a DVD audio commentary on the story with Sophie Aldred, writer Graeme Curry, director Chris Clough, script-editor Andrew Cartmel and composer Dominic Glynn, and this is moderated by Toby Hadoke. There’s also an isolated music option by Dominic Glynn and there’s an info-text commentary option to enjoy. There’s also a ‘Radio Times Listings’ PDF of the story. There’s a ‘coming soon’ trailer for ‘Death to the Daleks’ with Jon Pertwee and Elisabeth Sladen.

‘The Happiness Patrol’ is not what I would call a favourite. I found it dull and whilst I appreciate it reflecting the 1980s and delivering a political message, I couldn’t find anything exciting with this one.

I enjoyed the ‘Ace Adventures’ DVD box set. Whilst it’s not the greatest collection of ‘Doctor Who’ stories, I enjoyed how Ace began as a ‘Doctor Who’ companion in ‘Dragonfire’. I feel ‘The Happiness Patrol’ was a let-down, but it was intriguing to see how the 1980s was reflected in a political fashion.