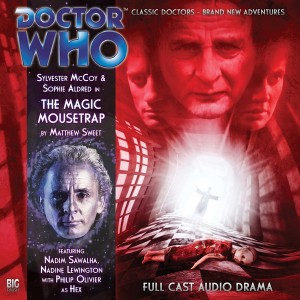 The Celestial Toymaker with the Doctor, Ace and Hex

Don’t expect to find cheese or ‘mices’ in this one!

‘The Magic Mousetrap’ is a surreal and mind-boggling story, featuring Sylvester McCoy as the Doctor with Sophie Aldred as Ace and Phillip Olivier as Hex. I enjoyed listening to this adventure, although this is quite a story to get your head around and you may not have all your questions answered in it.

This four-part story by Matthew Sweet is an adventure influenced by the ‘whodunit’ mysteries and the book ‘The Magic Mountain’ by Thomas Mann. I’ve not read that book, but I certainly definitely felt the literary influences featured throughout this story set in the Alpine Mountains of Switzerland.

The story starts in 1926 where the Doctor doesn’t seem to know where he is. He meets up with various characters at an exclusive sanatorium in the Alpine Mountains. He finds his friends Ace and Hex are working against him and he’s about to confront his oldest enemy in the Celestial Toymaker.

This is quite a complex tale with the Doctor facing the Toymaker, since it plays on your mind as to what’s going on and there’s a story behind the story in this adventure. The Doctor doesn’t seem to be the one with the plan at first, until interesting revelations soon crop up later on in this adventure.

The Toymaker is presented quite differently compared to previous stories featuring him. He’s portrayed as a ventriloquist’s dummy, which is quite eerie and creepy to hear on audio. I’m not sure who is playing the Toymaker, since he tends to shift from person to person including Ludo Comfort. 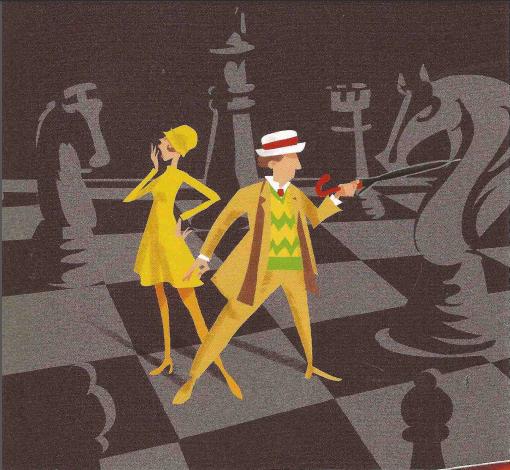 Sylvester McCoy does an intriguing performance as the Doctor in this one. He suffers from amnesia and doesn’t know what’s going on, as he isn’t the master manipulator. I like how he’s working things out and sounding comical at times. He seems to have outwitted himself this time for this adventure.

Sophie Aldred and Philip Olivier deliver really good performances as Ace and Hex in this one. It seems that they are the manipulators in this one and not the Doctor. They’re also impersonating posh British types, as they call themselves Bunty and Bobo; are both married and have posh voices.

Sophie seems to relish being a ‘posh’ Ace in this story. I’m pleased that Sophie’s able to do another voice compared to the rough London accent she usually does for Ace. Ace also seems to relish in manipulating the Doctor, since he’s manipulated her once too often and she’s getting her own back.

Philip also does a good ‘posh’ sounding-voice for Hex. Hex is clearly uncomfortable with lying to the Doctor, unlike Ace. He wonders when this deception is going to be over and when they can defeat the Toymaker. Hex is very distressed when the Doctor discovers the truth halfway during this story.

The story’s guest cast includes Nadim Sawalha as Swapnil Khan. I’ve seen Nadim before in ‘The Nativity Story’ film and he was in ‘1001 Nights’ with the Fifth Doctor and Nyssa. Khan is one of the players in the Toymaker’s games; trapped in the Toymaker’s world and father to Queenie Glasscock.

There’s also Nadine Lewington as Queenie Glasscock. Nadine is well-known for appearing in ‘Holby City’. Queenie is a girl that the Doctor meets in Switzerland and becomes the Doctor’s one-time companion. She gets easily stunned and shocked when terrible things happen during this adventure.

The rest of the guest cast are as follows. There’s Paul Antony-Barber as Ludovic ‘Ludo’ Comfort; Joan Walker as Lola Luna; Andrew Fettes as Harry Randall and also Andrew Dickens as Herbert Randall.

The story contains a number of game-playing elements that you really need to keep track of. These games include chess; consequences and sudden death. The Toymaker also seems to have modernised his games, echoing some of today’s quiz shows like ‘Countdown’ and ‘Family Fortunes’.

I must admit I found the story’s conclusion rather disappointing. I was lost as to what actually happened and how the Toymaker was defeated. The Doctor seems to reassure Queenie at the end, but I can’t say I’m reassured myself especially as the Doctor hasn’t resolved things with Ace and Hex. 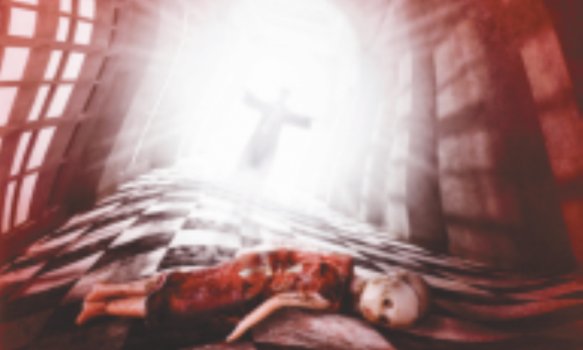 ‘The Magic Mousetrap’ has been intriguing and surreal story to listen to with the Doctor, Ace and Hex. I haven’t heard this one for a long time and may need to listen to it again. I wasn’t happy with the conclusion for this adventure, but it contains some interesting scenes and concepts throughout.

The CD extras are as follows. On Disc 1, there is a trailer for the next story with the Doctor, Ace and Hex called ‘Enemy of the Daleks’. There also are behind-the-scenes interviews conducted by writer Matthew Sweet with Phillip Olivier and Sylvester McCoy and with Sophie Aldred.

2 thoughts on “‘The Magic Mousetrap’ (Audio)”