‘ASSASSIN IN THE LIMELIGHT’

Washington DC, 1865 with the Sixth Doctor and Evelyn

Dr. Robert Knox is back to cause trouble!

‘Assassin in the Limelight’ is the third ‘Doctor Who’ story by Robert Ross. Robert contributed to ‘Doctor Who’ through Big Finish in his previous two stories ‘Medicinal Purposes’ and ‘Pier Pressure’. I enjoyed those two stories very much and was so looking forward to what was in Ross’ third instalment.

This third contribution by Robert Ross is another historical adventure set in Washington DC in America 1865. Robert has a knack for writing historical adventures. He relies well on historical facts and events in his stories as well as embellishing them with some humour and a creative license too.

That being said, I don’t think ‘Assassin in the Limelight’ has been the strongest to end Robert Ross’ trilogy of ‘Doctor Who’ stories. I prefer ‘Medicinal Purposes’ especially with David Tennant in it. But it was fun to listen to this adventure and to also learn more about Abraham Lincoln’s assassination.

The story takes place when the Doctor and Evelyn arrive in Ford’s Theatre in Washington on Friday the 14th of April 1865. The TARDIS duo know what’s to come as Ford’s Theatre is where Abraham Lincoln, the President of the United States gets assassinated. But somebody has changed all of that.

Now I’m not an expert on the assassination of Abraham Lincolon in American history, I’m afraid. I’ve only seen the film ‘Lincoln’ with Daniel Day-Lewis at the cinema in January 2013. So it was rather interesting to learn some more about the circumstances on how Lincoln was assassinated back then.

Despite the story being able Lincoln’s assassination, Lincoln doesn’t actually appear in the story. This rather disappointed as it would have been interesting for the Doctor and Evelyn to meet Lincoln in person. Instead they meet the people who somewhat cause the assassination attempt to take place. 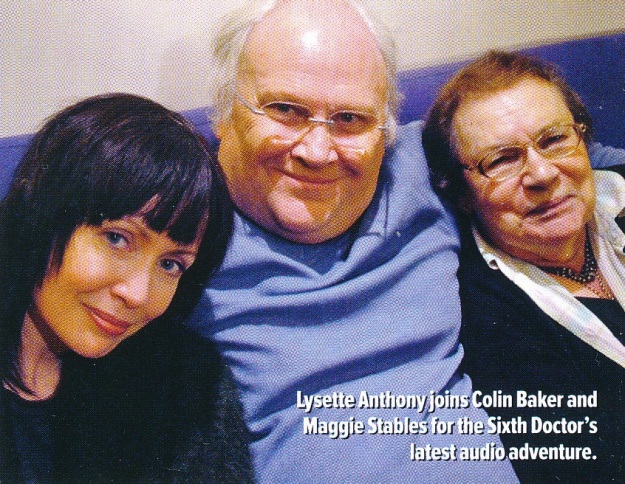 Colin Baker is very good as the Sixth Doctor in this audio adventure. The Doctor again gets curious about what’s happening with mysterious goings-on at Ford’s Theatre and how time has suddenly changed itself around. He becomes very serious when confronting Knox for the first time in this tale.

I enjoyed the argument between the Doctor and Evelyn in ‘Part Three’ and not realising that Knox is calling for them to come into his TARDIS before he goes off. The Doctor gets a chance to be inside Knox’s TARDIS and takes control, especially when he’s dealing with the real alien menace in this tale.

Maggie Stables is equally very good as Evelyn Smythe, the Doctor’s companion in this story. I like how Evelyn always questions the Doctor on his plans of actions as well as his motives when they deal with Knox and the real enemy. There’s a moment when Evelyn falls out with the Doctor at one point.

Sometimes Evelyn can be unreasonable with the Doctor, but she always come back to support him and she utilises her expertise as a history lecturer to good effect. Evelyn also gets to show a caring, motherly side to female characters like Lizzie. She clearly dislikes Dr. Knox, especially with his breath.

Leslie Phillips in ‘Assassin in the Limelight’.

Leslie Phillips returns in villainous glory as Dr. Robert Knox, whom the Doctor and Evelyn met in Edinburgh 1828 in ‘Medicinal Purposes’. Leslie is a renowned film actor as well as appearing in TV shows I’ve seen like ‘Monarch of the Glen’. Leslie clearly relishes the role of Knox in this audio story.

Knox seems to have mellowed since his first appearance in ‘Medicinal Purposes’. He’s now ‘naughty but nice’ as Robert Ross told Leslie Phillips during the making of this story. Knox is still the crafty human time meddler with a TARDIS, but something has happened to him since ‘Medicinal Purposes’.

Just to say, we get to see what Knox’s TARDIS is like on the inside. Since it’s a Type 70 TARDIS, it’s pretty advanced including a computer voice and an elevator. An elevator inside a TARDIS?! Who would have thought it?! Knox gets to pilot his TARDIS in order to try and get away from Washington.

Eric Loren guest stars in this story as John Parker, an American policeman and one of the four men detailed to act as bodyguard to Abraham Lincoln. Eric has also been in the ‘Doctor Who’ TV series, playing Mr Diagoras and the Dalek Sec hybrid during ‘Daleks in Manhattan’/’Evolution of the Daleks’.

Parker is an interesting if unusual policeman during the story. He gets wind of someone attempting to assassinate the President and gets suspicious of the Doctor and Evelyn being involved. He soon takes action, sending Thomas Eckert to do a job before he realises John Wilkes Booth’s involvement.

Lysette Anthony guest stars as Clara Harris, an American socialite and a guest of Abraham Lincoln at Ford’s Theatre. I’ve heard Lysette Anthony before in another ‘Doctor Who’ audio called ‘The Secret History’ with Peter Davison. Clara seems equally shifty when she walks about the Washington area.

But that’s not all Lysette gets to do in this ‘Doctor Who’ story. Lysette also gets to be the voice of Knox’s TARDIS. It’s clearly from the CD interviews that Lysette enjoyed playing Leslie Phillip’s TARDIS in this story. It was so interesting to hear a TARDIS having a female voice and one that sounded sexy.

There’s also Paul Dubois as John Wilkes Booth. Booth, according to history, happens to be an actor and the assassin who kills Abraham Lincoln at Ford’s Theatre in 1865. At the end of ‘Part One’, it seems that Booth is dead. The Doctor and Evelyn are worried by this! But is Booth really dead here?

There’s also Madeleine Potter as Lizzie Williams. Madeleine has been in a few Big Finish audios including ‘The Cradle of the Snake’ with Peter Davison. Lizzie Williams gets shown around the White House by Thomas Eckert. She gets caught up in a romantic affair and gets possessed by some aliens.

There’s also Alan Marriott as Henry Clay Ford, who is the owner of Ford’s Theatre in the story. There’s also Mikey O’Connor as Thomas Eckert, who almost shoots the Doctor during an interrogation. Eckert also gets possessed by the evil aliens in this story during the end of ‘Part Three’.

The evil aliens in this story are the Indo. The Indo made their first ‘Doctor Who’ appearance in ‘Pier Pressure’. The Indo are back with a vengeance as they attempt to use President Lincoln’s assassination as a means of wiping out humanity. Will the Doctor be able to outwit the Indo in this?!

It seems that Knox has died at the end of this ‘Doctor Who’ story. But I honestly can’t believe that as I’m sure Knox will come back. I was rather underwhelmed by the ending of this story, since it all seemed to be rushed and the Doctor had managed to escape a very difficult trap rather easily here. 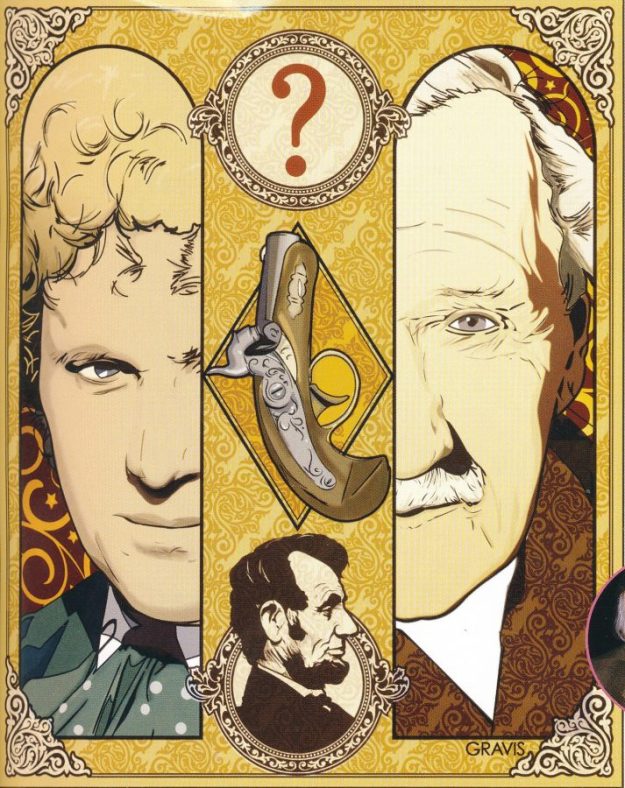 ‘Assassin in the Limelight’ has been an enjoyable story with the Sixth Doctor and Evelyn facing Knox and the Indo together in this third of a trilogy by Robert Ross. It’s not the best third story in the trilogy, but I found it very interesting with Abraham Lincoln’s assassination and everything around it.

The CD extras are as follows. On Disc 1, there’s a trailer for ‘The Death Collectors’ with Sylvester McCoy. At the end of Discs 1 and 2, there are some cast and crew behind-the-scenes interviews including Colin Baker, Maggie Stables, Leslie Phillips, Eric Loren, Lysette Anthony, writer Robert Ross, etc.

5 thoughts on “‘Assassin in the Limelight’ (Audio)”