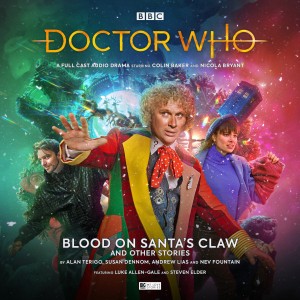 ‘BLOOD ON SANTA’S CLAW AND OTHER STORIES’

A Christmas Cracker with the Sixth Doctor, Peri and Joe

Are you ready for a festive ‘Doctor Who’ offering by Big Finish?

‘Blood on Santa’s Claw and Other Stories’ was part of my 6 CD subscription of ‘Doctor Who’ audios by Big Finish when I subscribed to the Fifth Doctor/Nyssa/Tegan/Marc audio series in 2019. This could not come at a bad time. I looked forward to another Sixth Doctor/Peri four episode anthology.

This time however, it’s a four episode anthology with a theme of Christmas to it. I was excited by this and it appealed to me greatly that Big Finish were doing it with the Sixth Doctor and Peri. Mind you, I came up this idea first with the ‘Merry Christmas From The Doctor, Nyssa and Billy’ anthology.

By the time you read this review, I heard ‘Blood on Santa’s Claw and Other Stories’ in December 2019. I heard this audio release again and again, enjoying the four episodes and the surprising twists featured in it. I didn’t know what to expect once it came to sitting down and listening to this release.

Despite it being four seemingly standalone one episode stories, ‘Blood on Santa’s Claw and Other Stories’ are surprisingly linked with each other. I hope I’ll elaborate as I write this review what I mean by that and hopefully in an entertaining way that will keep you in the festive spirit throughout. 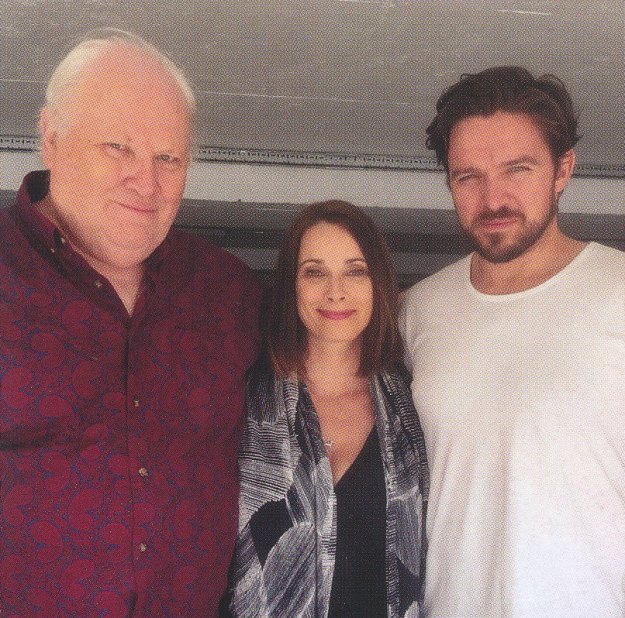 Colin Baker, Nicola Bryant and Luke Allen-Gale in ‘Blood on Santa’s Claw and Other Stories’.

The first episode of this audio release is ‘Blood on Santa’s Claw’ by Alan Teirgo. This is the first time Alan Teirgo writes for ‘Doctor Who’. I’ve not come across him before and found him a pretty good writer for this tale. Fun fact: I happen to know that Alan Teirgo is a very good friend of David Agnew.

Anyway, the story has the Doctor, Peri and Joe visiting the planet Naxios…wait a minute! Who’s Joe? Oh yes! I forgot to mention! There’s a new companion joining the Sixth Doctor and Peri in the TARDIS. This happens to be Luke Allen-Gale as Joe Carnaby. Joe happens to be Peri’s boyfriend here.

Timelord007: (calls) “Tim! When are we going to have James Darby’s debut story?”

By the way, ‘Blood on Santa’s Claw’ happens to be a wordplay on the title ‘Blood on Satan’s Claw’, which is actually a movie that features Wendy Padbury in it. Not that it has any relation to this ‘Doctor Who’ story whatsoever. (My goodness, the movie poster and 18 rating looks pretty disturbing!)

As I said, the Doctor, Peri and Joe visit the planet Naxios. Whilst Joe waits by the TARDIS, having a phobia of tunnels, the Doctor and Peri explore. Eventually, they come across a dead Santa Claus/Father Christmas in the tunnel. The Doctor and Peri find there is more to this deadly situation.

I loved it when Colin Baker’s Doctor gets to dress up as Father Christmas in the story with the red hat; white beard and red velvet suit, going “Ho, ho, ho!” I can just imagine Colin doing that. 😀 Peri also dresses up as his elf helper ‘Peri-Wig’. I couldn’t help but laugh out loud as I heard those scenes.

There are themes of Shakespeare and ‘The Wind In The Willows’ featured in the story especially with characters like Ratty, Toad and Mole as well as Cordelia and Iago. There are also themes of faith and religion which were intriguing. Steven Elder guest stars as Rudolph the Red-Nosed Reindeer here. 😀 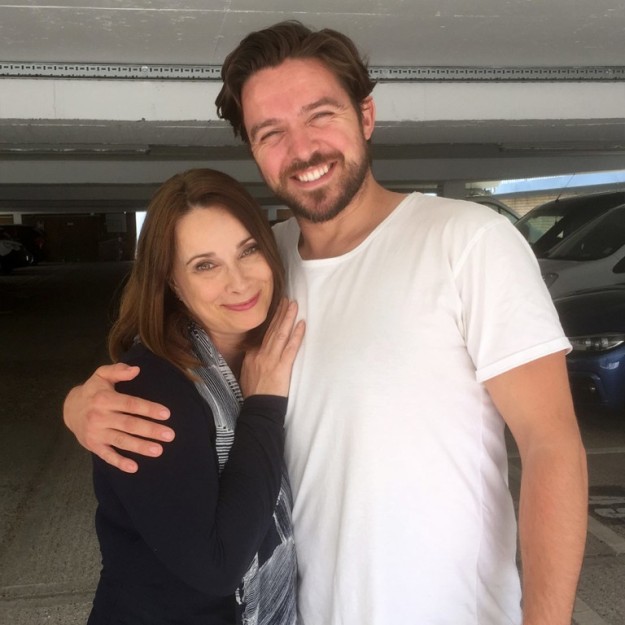 Nicola Bryant and Luke Allen-Gale in ‘Blood on Santa’s Claw and Other Stories’.

The second story of this audio release is ‘The Baby Awakes’ by Susan Dennom. This is another ‘Doctor Who’ writer I’ve not come across before and it happens to be her first contribution to Big Finish. I found her writing very good here too. Susan Dennon happens to be a friend of Paula Moore.

In this adventure, the Doctor, Peri and Joe visit the Ishtar Institute. The trio solve a mystery regarding the ‘Designer Babies’ scheme there. Peri and Joe undergo a process where they select which babies they would like to mother and father while the Doctor’s investigating elsewhere in this.

I found how Peri and Joe go through the baby selection process quite disturbing and intriguing. Peri’s rather uncomfortable with it at first whilst Joe seems casual about it. Gradually, Peri starts to grow an attachment to the babies they bring up together. Joe, on the other hand, seems rather cold on it.

Yeah, this is where I found Peri and Joe’s romantic relationship not as romantic as it seemed to be. Joe often comes across as a jerk and rather mean-spirited in a way. Some the things he says…well, I certainly wouldn’t have Billy say them if I put him and Nyssa in a similar scenario Peri and Joe get into.

As Peri and Joe try to raise their children Paul and Janey on Christmas Day, their two kids become monsters like werewolves when teenagers. Chaos ensues and things come to the fore regarding the Ishtar Institute’s true colours. Disturbing revelations are made. This would take anybody by surprise.

This story features characters like Cordeline who is a helpful guide to Peri and Joe regarding their choices in terms of which children they’d like to have. There’s also Balan, played by Roger Parrot from ‘Babblesphere’, who has a dark history and a handshake that quite intrigues the Doctor in this.

The story’s conclusion is quite dramatic. Peri is upset over the loss of her children. Joe is rather insensitive about it. Peri lets out her anger on Joe, questioning why they’re even together. Peri leaves to have a bathe in the TARDIS swimming pool whilst Joe’s speechless in the Doctor’s presence. 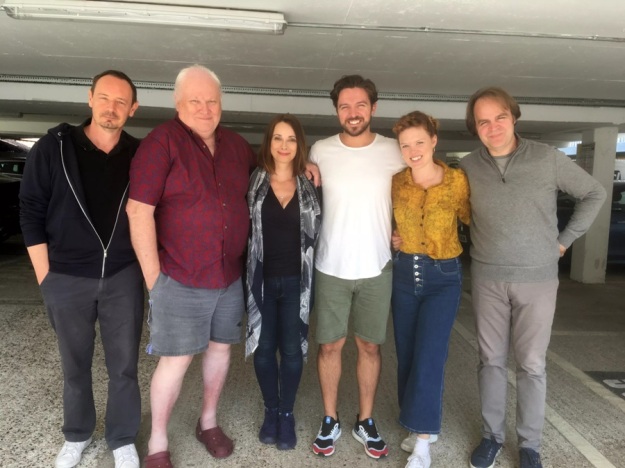 ‘I WISH IT COULD BE CHRISTMAS EVERY DAY’

The third episode of this audio release called ‘I Wish It Could Be Christmas Every Day’ is by Andrew Lias. Once again, Andrew Lias is a brand-new writer to ‘Doctor Who’ in Big Finish. I enjoyed his writing here too. Andrew Lias happens to be a good friend of Robin Bland…or was it Norman Ashby?

This episode has the Doctor, Peri and Joe visit a space station where a Christmas party takes place. This Christmas party has been going on for three years. The TARDIS arrives on the 12th of April. Honestly, I don’t understand why they didn’t change to an Easter party instead of a Christmas party?

I found it amusing when the robots were serving canapés and saying “Would you like a nibble?” to the Doctor and Peri. The party’s host is Steven Elder as Lord Lycaon with his daughter Louise Kempton as Selene. Lord Lycaon is pretty mysterious when the Doctor interacts with him in the tale.

In terms of Peri and Joe’s relationship…I’m sorry, but I like Joe less and less. He comes across as selfish and rather mean to Peri. He also keeps calling her ‘babe’ which Peri hates. I wouldn’t have Billy call Nyssa ‘babe’ in my stories. That would be disrespectful. I would not call Peri a ‘babe’ either.

It was pretty dramatic between Peri and Joe in that scene where they discuss their relationship together. Joe wants to stay in the 59th century and asks Peri to stay with him. Peri’s reluctant and soon leaves in a huff, sobbing in a corner. Nicola steals the scene with her acting in that big moment.

I honestly didn’t know how this episode was going to turn out, especially with the Doctor and Peri seeming to help the people aboard the space station Tate Galactic. They manage to free them from their three-year imprisonment and take them to the nearest moon. But this is a really grave mistake.

And it’s all on the Doctor’s part. It’s soon revealed that the party-goers on Tate Galactic led by Lord Lycaon and Selene are in actual fact…Wier Lords. They’re werewolf-like monsters similar to vampires and are enemies of the Time Lords. This all leads to a dramatic cliff-hanger. I was not expecting that! 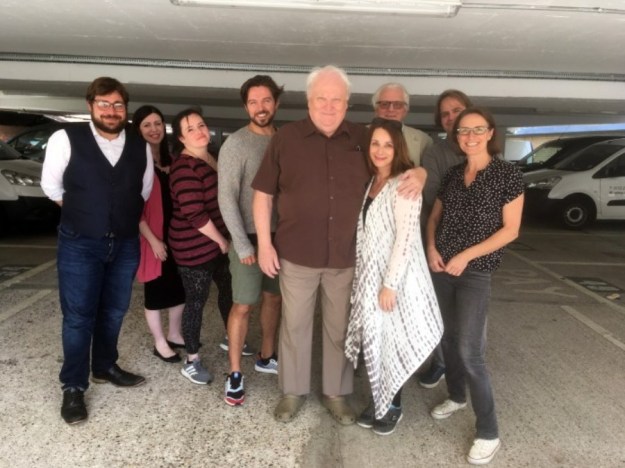 ‘BRIGHTLY SHONE THE MOON THAT NIGHT’

‘Brightly Shone The Moon That Night’ is by Nev Fountain. And yes, as you probably guessed, he’s the writer of all four episodes of this four-episode anthology. I was completely fooled! 😀 Alan Teirgo is a play on the word ‘alter-ego’; Susan Dennon a play on ‘pseudonym’ and Andrew Lias a play on ‘alias’.

And it turns out Joe is a villain after all. Joe is actually a Wier Lord himself. Peri deduced this when she locked herself and Joe in an airlock to threaten the Wier Lords to free the Doctor. It was pretty heartbreaking to hear that and Peri is pretty heartbroken herself once Joe’s true colours are revealed.

It was pretty gruelling to hear Joe sounding so evil and all that. It’s a very clever twist, but I feel sorry for Peri as I hoped she would’ve had a nice partner to travel with in the TARDIS. The Doctor must be pleased however. He did not really care for Joe from the start, despite being quite tolerant with him.

There are nice links to previous episodes in this anthology with the return of certain characters. This includes Ratty, Toad and Mole from ‘Blood on Santa’s Claw’ and Cordeline and Shreela from ‘The Baby Awakes’. Peri is also overjoyed to see her two children Paul and Janey who managed to survive.

The episode does feature Peri killing her evil boyfriend Joe using Paul’s weapon. I’m reminded of when Allison killed her boyfriend Julian in the ‘Counter-Measures’ episode ‘State of Emergency’. I think Big Finish have a problem with wanting heroines to kill evil boyfriends in some audio episodes.

I did find the episode’s ending muddled in terms of how the Doctor defeated the Wier Lords. Mind you, I did pick up the Doctor using the moon as a weapon to accelerate the Wier Lords’ regeneration process. It is intriguing werewolves and vampires are the enemies to the Time Lords in ‘Doctor Who’.

The episode’s end was rather sweet where the Doctor and Peri say “Merry Christmas” to each other. But I’m curious as to what happened to Paul and Janey, Peri’s children at the end. I assume they’re still alive. Do they get taken care of by someone else instead of Peri. I’m not sure it is all made clear. 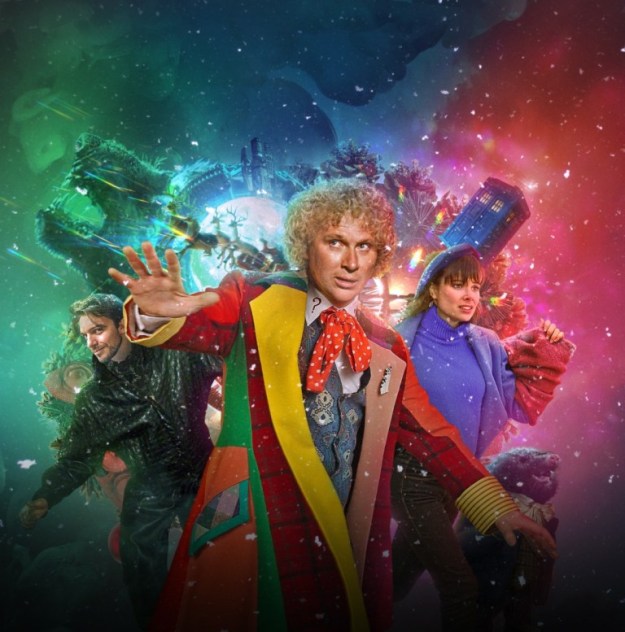 ‘Blood on Santa’s Claw and Other Stories’ has been an enjoyable festive offering of ‘Doctor Who’ by Big Finish. I enjoyed Colin Baker as the Doctor and Nicola Bryant as Peri throughout. There are nice surprises and twists featured throughout to link all four episodes. They still make it feel Christmassy.

The CD extras are as follows. At the end of Disc 1, there’s a track of incidental music to enjoy. At the end of Disc 2, there is a trailer for ‘Dark Universe’ with Sylvester McCoy and Sophie Aldred. There are also behind-the-scenes cast and crew interviews with director John Ainsworth, Colin Baker, Nicola Bryant, Luke Allen-Gale, writer Nev Fountain, etc.