Edinburgh 1828 with the Sixth Doctor and Evelyn

This is a quaint ‘Doctor Who’ treat to have!

I enjoyed ‘Medicinal Purposes’ very much. This is a Big Finish audio drama of ‘Doctor Who’ by Robert Ross, who makes his first contribution to the series. Robert Ross is an acclaimed expert on British comedy, as he has written reference books on ‘Carry On’; ‘Monty Python’ and ‘Fawlty Towers’ itself.

This four-part adventure by Robert Ross is an historical adventure set in Edinburgh 1828 (not 1827 according to the back of the CD cover). ‘Medicinal Purposes’ stars Colin Baker as the Sixth Doctor and Maggie Stables as Evelyn Smythe. Robert writes well for this TARDIS duo in this historical caper!

‘Medicinal Purposes’ is a story that involves the infamous body snatchers William Burke and William Hare. I’m not very familiar with the Burke and Hare murders that were occurring around this time in 19th century British history. But it was really intriguing to discover, as I listened to this audio drama.

The Doctor and Evelyn arrive in the TARDIS somewhere in the underground of Edinburgh’s city. They find that the body snatching antics of Burke and Hare are taking place in Edinburgh, but something’s not right. Time is bending and the Doctor discovers it has to do with the mysterious Dr. Robert Knox.

I must admit the story was sometimes baffling to listen to as there were moments when I thought ‘had I lost the plot’ as the time travel elements in the story were complicated. But somehow, I was able to enjoy the interaction of the characters in this story and found the pace of this tale quite fast.

Robert Ross has done well in terms of his historical research. He illustrates through the Doctor and Evelyn how they identify what’s going to happen with these Burke and Hare murders and who’s going to die in this story. When they find Knox is up to mischief, they must put history back on track.

Apparently there’s an underground city in Edinburgh when the Doctor and Evelyn visit it in the story. This is something new for me, as I’ve been to Edinburgh but didn’t know anything about an underground city. It didn’t spoil my enjoyment, especially when we also visited Knox’s house in this.

Colin Baker is superb as the Doctor in this adventure. I enjoyed the Doctor’s mellowed attitude to life, compared to when he was brash in his early period of his tenure. Colin’s Doctor is not as arrogant as he used to be. He’s kinder and compassionate these days but with a touch of fire in him.

Maggie Stables is equally superb as Dr. Evelyn Smythe in this audio adventure. Evelyn is an ideal companion to match to Colin’s Doctor. Both banter with each other well. Sometimes Evelyn gets on the Doctor’s nerves and vice versa. But the two clearly get on well as they share a common interest.

Evelyn shares the Doctor’s concerns about what’s going on with time changing and regarding the Burke and Hare murders. She’s very appalled by the rudeness of Robert Knox when she meets him at his house. She gets arrested by the police, but she’s soon free and walks back to ‘The Last Drop’ pub.

The villain of this story is Leslie Phillips as Dr. Robert Knox. Leslie is well-renowned English actor, starring in many films and TV shows. I’ve seen Leslie in an episode of ‘Monarch of the Glen’ and an episode of ‘Midsomer Murders’. Leslie’s performance as Dr. Knox is superb in this ‘Doctor Who’ tale.

Robert Knox is an actual surgeon, anatomist and zoologist from the 19th century. But it turns out that the Robert Knox in this story is not the real one as depicted in history. This Robert Knox is a tyrant and a cruel man, since he’s the one causing the changes in time as well as the horrid murders.

I like the confrontation scenes between Robert Knox and the Doctor in this audio story. Colin’s Doctor is clearly opposed to Knox’s plans, whilst Knox just shrugs it off and dismisses the Doctor’s objections aside. It turns out that Knox has his own TARDIS. But that doesn’t mean he is a Time Lord!

And this is what you’ve been waiting for! This audio drama features a special guest appearance of David Tennant as Daft Jamie. This is David Tennant’s first chronological appearance in ‘Doctor Who’ and this was made before he became the Tenth Doctor in the new series. I enjoyed David in this tale.

In this, David plays Daft Jamie, a young man living in Edinburgh who is rather simple-minded and considered a halfwit by others. But he’s harmless! I enjoyed Daft Jamie’s interaction with the Doctor, and the Doctor clearly warms to him. I love it when Daft Jamie gets to be inside the Doctor’s TARDIS.

Hearing David Tennant in this ‘Doctor Who’ audio drama was a treat and a highlight for me. Before David was the Doctor in ‘Doctor Who’, he worked with two Doctors in Colin Baker and Sylvester McCoy. I’m pleased he was in the Big Finish audios of ‘Doctor Who’ before his fame in the TV series.

There’s also Glenna Morrison as Mary Patterson. Mary is a pretty young girl who Daft Jamie hangs around with. She clearly becomes attracted to the Doctor when she meets him, but is hiding something about know Burke and Hare. Mary unfortunately gets murdered during the events of this.

Tom Farrelly guest stars as Billy Hare in this story. Hare is clearly a roughian and tries to take advantage of Mary when she’s at ‘The Last Drop’ pub. He closely works with Dr. Knox when they conduct business about in Edinburgh. Sometimes, Hare and Knox do their work without Burke at all.

Kevin O’Leary guest stars as William Burke in this story. Burke doesn’t get to have an active role until the second half of the story. At first, nobody seems to know who Burke is, including Mary. Burke is a complete contrast to Hare. Burke is more sensitive and he has a conscience, whereas Hare is amoral.

The atmosphere and the music for this ‘Doctor Who’ audio adventure are pretty good. I’m not clear about what the ending for ‘Medicinal Purposes’ is about. But the Doctor and Evelyn have allowed Daft Jamie to see his future where he’s become famous, despite him dying when they take him back. 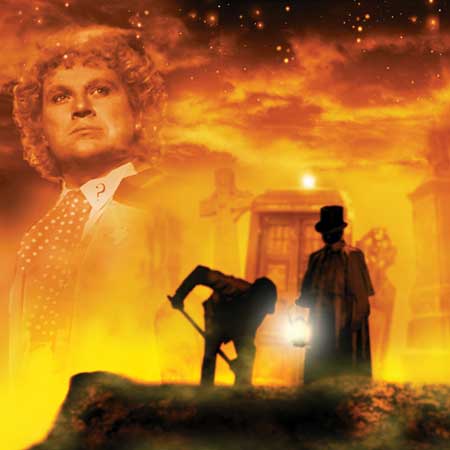 ‘Medicinal Purposes’ is an enjoyable ‘Doctor Who’ audio adventure with the Sixth Doctor and Evelyn Smythe. The highlights of this audio drama are Leslie Phillips as Dr. Robert Knox; David Tennant as Daft Jamie and another historical romp that is pacey and interesting with some lovely performances.