The Hodiac with the Sixth Doctor and Mel

So, this is a lost ‘Doctor Who’ story by Russell T. Davies! 🙂

With the ‘Doctor Who’ TV series about to be showrun again by RTD for the 60th anniversary and beyond (however long that’ll be), it’s only fair that I check out a Big Finish audio adaptation of a ‘Doctor Who’ adventure he submitted to the classic series production office, which is very intriguing.

I didn’t anticipate RTD had pitched a classic ‘Doctor Who’ story featuring the Sixth Doctor and Mel to the TV production office. This would have been in 1986 or 1987, if I assume correctly. Sadly, when the classic TV show finished in 1989, Andrew Cartmel told RTD that the production office had been closed down.

I wonder if RTD had any contact with Eric Saward when he submitted ‘Mind of the Hodiac’ to the ‘Doctor Who’ production office, since he would’ve been the script editor at the time the Sixth Doctor and Mel were around. Then again, Eric Saward had soon left before Andrew Cartmel came on board. 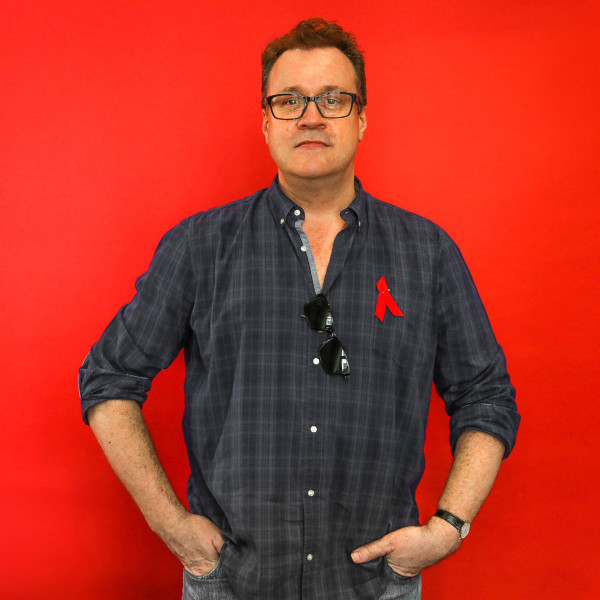 Co-writer Russell T. Davies in ‘Mind of the Hodiac’.

I’m also wondering at what stage RTD was at when he became a writer/producer in the late 1980s. Yes, I know he did ‘Dark Season’ in 1991, but he was producing TV shows before he wrote his actual first TV production. Still, it’s nice to discover this first ‘Doctor Who’ story he initially drafted for TV. 🙂

When the world was going through the Covid-19 pandemic in 2020, RTD found a few pages of his original ‘Mind of the Hodiac’ script and started sharing it online during the ‘Doctor Who: Lockdown!’ watch-a-long for ‘The Runaway Bride’. This is of course something Big Finish quickly caught on.

Producer Emily Cook in ‘Mind of the Hodiac’.

Once in touch with Emily Cook, who organised ‘Doctor Who: Lockdown!’ and became the producer of ‘Mind of the Hodiac’, RTD worked with Scott Handcock, who co-wrote the audio adaptation and directed it. I soon purchased ‘Mind of the Hodiac’ to listen to as a download from Big Finish itself. 😀

‘Mind of the Hodiac’ has the Sixth Doctor and Mel investigating a mystery when the TARDIS is drawn to Earth. It involves the mysterious Hodiac manipulating the Galactic Stock Exchange to raise money as well as establishing contact with someone in an ordinary British family plagued by psychic events.

This is a two-part story, matching in the same style of two-part TV stories in Season 22 of ‘Doctor Who’ with the episodes being approximately 45 to 50 minutes each. Not sure if RTD originally planned to be a 2 x 45-50 minute story, since ‘The Trial of a Time Lord’ episodes are 25 minutes each.

From listening to ‘Mind of the Hodiac’, I enjoyed it. It was nice to hear another witty and invigorating ‘Doctor Who’ adventure by RTD and featuring Colin Baker as the Sixth Doctor and Bonnie Langford as Mel. I could tell that this adventure had a lot of visual and thought-provoking ideas throughout. 🙂

Colin Baker and Bonnie Langford in ‘Mind of the Hodiac’.

With that said, there was a lot to take in and you probably would need to listen to the story a couple of times to get an idea of what’s going on. Don’t get me wrong, the attributes of a RTD ‘Doctor Who’ story are there, especially with some of it being earthbound and it features a typical human family. 🙂

It’s what I’ve come to expect when hearing a RTD ‘Doctor Who’ story, with it featuring earthbound settings and human families in the same vein of Rose Tyler and her family. It’s also hard to not make comparisons between ‘Mind of the Hodiac’ and ‘Damaged Goods’, which is a book and an audio story.

But this story is definitely tailored for TV and it features unusual concepts involving mind manipulation and ghostly apparitions. There’s also a lack of the Sixth Doctor and Mel interacting with the supporting characters when they come to Earth in the 1980s and they’re solving a mystery. 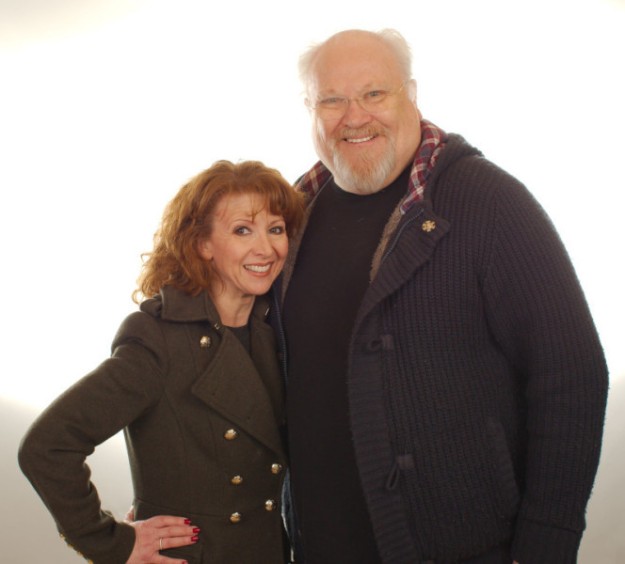 Bonnie Langford and Colin Baker in ‘Mind of the Hodiac’.

Colin Baker, as always, is excellent to listen to as the Doctor in this audio adventure. It was fun to hear him reading from ‘The Wind in the Willows’ and how comparisons are made between his Doctor and Toad. This is exemplified from listening to the behind-the-scenes interviews of this story.

It’s clear Colin Baker gets into RTD’s writing well, especially when he’s not written as the brash Sixth Doctor and more the friendlier Sixth Doctor like he was in ‘Terror of the Vervoids’. It’s interesting how Colin’s Doctor confronted the Hodiac who seemed to wear a similar multi-coloured coat as him.

I’m not sure I’m fully behind the concept of the Doctor and the Hodiac wearing the same coats, since it’s not emphasised enough from hearing the audio. I mean, was the Hodiac responsible for the Sixth Doctor choosing his multi-coloured coat in ‘The Twin Dilemma’ and he affected his mind somewhat?

It would explain a lot, especially why he strangled Peri. I just think a confirmation of that would be clearer. Also, I don’t know if it’s just me, but I think reactions from Mel on seeing the Hodiac wearing the Sixth Doctor’s multi-coloured coat needed to be emphasised more when hearing the audio story. 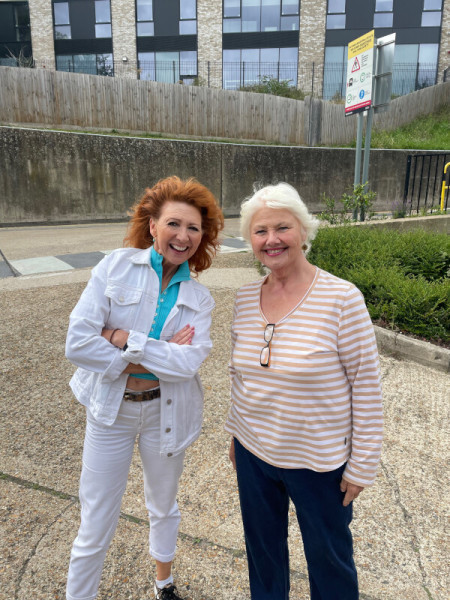 Bonnie Langford and Annette Badland in ‘Mind of the Hodiac’.

Bonnie Langford is equally excellent as Mel in the audio story. It was interesting to hear from Bonnie in the behind-the-scenes interviews that the relationship between the Sixth Doctor and Mel seemed limited on TV, since she often got him to exercise a lot and drink plenty of carrot juice in the TARDIS.

I think Mel has come a long way from that in the Big Finish audios and it’s interesting how well-written she is by RTD. There is a moment where she did scream, as she and the Sixth Doctor were crashing down in a lift at the end of ‘Part One’, but for the majority of this story, Mel seemed active.

It also helps that Mel’s scream at the end of ‘Part One’ isn’t ear-piercing and annoying like it was in the TV series and she only screamed once. She also looks after young Katy when they’re hiding in reception from the Tungsten warriors. She’s also at the Doctor’s side once they thwart the Hodiac. 🙂

‘Mind of the Hodiac’ features a plethora of guest stars. 🙂 There’s Annette Badland who plays Mrs. Chin in the adventure. Many will know Annette Badland for playing Margaret Blaine the Slitheen in ‘Aliens of London’/’World War Three’ and ‘Boom Town’. She’s also done many Big Finish audio stories. 🙂

Laurie Kynaston guest stars as the titular Hodiac in the story. Laurie Kynaston also voiced Brent Hall in the ‘Torchwood’ audio story ‘Curios’. The Hodiac is also joined by Luyanda Unati Lewis-Nyawo as the Woman. I’ve no idea who ‘the Woman’ is, apart from her being a kind of construct of the Hodiac.

The human family includes T’Nia Miller as Mrs. Maitland. ‘Doctor Who’ fans will know her for being the female Time Lord general who regenerated from Ken Bones in ‘Hell Bent’. Joining Miss Maitland in the story are Sutara Gayle as Nan, Loreece Harrison as Lisa and Darcey-Ella Whittington as Katy. 🙂

Lisa and Katy are Miss Maitland’s daughters. Lisa is often grumpy for most of the story. Katy is the young one and doesn’t appear much. Sutara Gayle as Nan has a link to the Hodiac in this story. It was interesting how the Sixth Doctor interacted with Nan to understand her connection to the Hodiac. 🙂

Lu Corfield, Wilf Scolding and Raj Ghatak in ‘Mind of the Hodiac’.

There’s also Richard Clifford as Jessop, Lu Corfield as Matra Fennel, and Raj Ghatak as Jenfold and the Tungsten Leader. Victoria Lambert (who played Marcie Hatter in ‘Dark Season’) plays Matra Fiss in the story, though she just appears in one scene and dies. Huh! I expected her to be in more of this. 😀

T’Nia Miller and producer Emily Cook in ‘Mind of the Hodiac’.

‘Mind of the Hodiac’ has been an enjoyable ‘Doctor Who’ audio adventure by Russell T. Davies, featuring Colin Baker as the Sixth Doctor and Bonnie Langford as Mel. This story might require a few more listens, but it was nice to hear this story with the Sixth Doctor and Mel in an RTD environment.

The CD extras are as follows. On Disc 1, there’s a suite of incidental music to enjoy. On Disc 2, there are behind-the-scenes interviews with the cast and crew, including Colin Baker and Bonnie Langford, co-writer Russell T. Davies, co-writer/director Scott Handcock and producer Emily Cook.