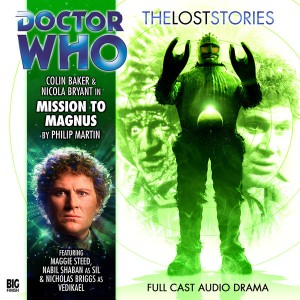 Ice Warriors and Sil with the Sixth Doctor and Peri

The Lost Season 23 of ‘Doctor Who’ continues!

‘Mission to Magnus’ is a 2 x 50-minute episode story by Philip Martin. Philip made his first contribution to the ‘Doctor Who’ series with his story, ‘Vengeance on Varos’, with Colin Baker. He also contributed to ‘The Trial of a Time Lord’ season with his story, ‘Mindwarp’. Both stories featured Sil.

In the original schedule for the Lost Season 23 back in 1985, ‘Mission to Magnus’ was meant to be the fourth story in transmission order. The first three stories were ‘The Nightmare Fair’, ‘The Ultimate Evil’ and ‘Yellow Fever and How To Cure It’. But sadly, Philip Martin’s story never got made.

I was fascinated about ‘Mission to Magnus’ since I wanted to find out what it was like after seeing ‘The Lost Season’ special feature on ‘The Trial of a Time Lord’ DVD. It was interesting to discover that this story was more light-hearted in tone compared to the other two stories that Philip wrote for TV.

This story features the Sixth Doctor and Peri inside the TARDIS, as it is being dragged towards the planet Magnus. It seems that the TARDIS duo have been caught in a trap by a Time Lord bully named Anzor, who gave the Doctor hell in his academy days. The Doctor and Peri are soon stuck on Magnus.

Very soon, the Doctor and Peri find themselves embroiled in a terrible plot which involves changing the orbit of the hot planet Magnus to make it colder. This plot involves Sil, the slug-like profiting creature whom the Doctor and Peri met on Varos, as well as the return of old foes: the Ice Warriors.

I must admit, I was surprised that Philip Martin included the Ice Warriors into what would have been his second ‘Doctor Who’ TV story with Sil. This was on request at the time to be given as a tribute to the original creator of the Ice Warriors, Brian Hayles. Philip Martin agreed to include them in his tale.

Having not read the ‘Mission to Magnus’ novel myself yet at the time of this review, I imagine the story would’ve been pretty visual in terms of design and action scenes. Thus it must have been tricky for Philip Martin to adapt the story for audio. But he did a fine job, as this is a pretty decent effort on his part.

I did listen to the story more than once in order to get a visual idea of what was going on in the story and how the Doctor and Peri got involved in the action on Magnus. I did keep alert, but at the same time I felt the story was leisurely paced and it took a while for the Ice Warriors to appear in the tale.

There’s also this sense of atmosphere of it being a typical ‘Doctor Who’ story from the 1980s. This is especially the case when the planet Magnus is dominated by women and a neighbouring planet Salva is dominated by men. There is a battle of the sexes occurring through this action-packed story.

Colin Baker and Nicola Bryant in ‘Mission to Magnus’.

Colin Baker excels as the Doctor in this adventure. I found it surprising that the Doctor had a Time Lord bully in Anzor when he was at the academy on Gallifrey. The Doctor behaves like a child when he realises that it’s Anzor who’s trapped them on the planet Magnus and Peri tells him ‘to grow up’.

I enjoyed it when the Doctor become intrigued about what’s going on Magnus; from the two boys he and Peri meet; to him meeting the women on the planet; to him meeting Sil again and discovering the Ice Warriors are involved. The Doctor shows more of a compassionate side during this audio tale.

It’s interesting to note, especially from Colin Baker’s comments in the CD interviews that the Sixth Doctor is toned down in terms of brashness when he was like that in the TV series. This could be the beginning of the Sixth Doctor’s mellowed-down nature, especially through the Big Finish adventures.

Nicola Bryant is wonderful to listen to as Peri in this ‘Doctor Who’ adventure. I would’ve thought Peri picked up that the Doctor was uncomfortable about facing Anzor again and be more sympathetic. I did like it when Peri was pleased that the Doctor stood up to Anzor by the time the tale came to end.

I found it funny when Peri was embarrassed by the two boys Vion and Asam calling her their ‘mother’ whilst calling the Doctor their ‘master’. It was also funny when Peri told the boys to stop kissing her feet as well as getting wet in the story. Peri gets wet with water twice in this audio story.

Peri gets separated from the Doctor for a bit and shares some scenes with the boy Vion. I liked it when Peri rescued Vion from some women on Magnus in the story. I also enjoyed the scenes where Peri is a prisoner of the Ice Warriors and she shivers, feeling cold, and asking to wear one of the furs.

Nabil Shaban as Sil in ‘Mission to Magnus’.

Nabil Shaban returns as the slimy, evil Sil. I enjoyed Nabil Shaban’s performance as Sil in ‘Mission to Magnus’. It’s like he’s never been away. I know that he was concerned about playing Sil again without the costume for audio, but he sounds just as he was from the TV series with evil laugh et al.

And yes! The evil laugh of Sil is still there. I don’t think I can match to doing an evil laugh of Sil as Nabil Shaban does it in the TV series and for audio. I like the references made to ‘Vengeance on Varos’ for Sil and how this story ties up the continuity between his first appearance and ‘Mindwarp’.

It’s interesting how Sil fares in this and he seems to be working on the side of the women on Magnus and perhaps a little bit with Anzor. He then shifts sides when working for the Ice Warriors. He can be very shifty especially in dodgy profiting making. He tries to make a deal with the Doctor at one point.

Nicholas Briggs comes into to provide the voices of the Ice Warriors in this story. That man can do voices for any monster whether it’s Daleks, Cybermen or Judoon. He clearly enjoys doing the Ice Warriors for TV and audio. It’s amazing how he provides different voices for each Ice Warrior in this.

Nick Briggs and James George also play two male human-like characters from the planet Salva in this story. Nick Briggs plays Ishka and James George play Hussa. Both are on a mission to negotiate with the women on Magnus. They are prisoners of the Ice Warriors when Peri meets them for ‘Part Two’.

Maggie Steed guest stars as Madamme Rana Zandusia, the leader of women on the planet Magnus in this story. Maggie Steed was suggested to play Rana Zandusia by Colin Baker for ‘Mission to Magnus’. Big Finish took on the inspired suggestion. I certainly enjoyed Maggie’s performance here.

Rana Zandusia seems a proud, cold-hearted woman who is determined to overthrow what she believes to be Magnus’ male oppressors on Salva. I’m curious as to what life on Magnus is like, as it seems pretty dictatorial with the women doing all the hard work and the men just there for mating.

In the story, Rana and her female consorts including Susan Franklyn as Jarmaya and Tina Jones as Ulema want to gain control of time-travel technology by the Time Lords. They work with Sil in order to get it from Anzor, the Time Lord bully, before eventually trying to get it from the Doctor’s TARDIS. 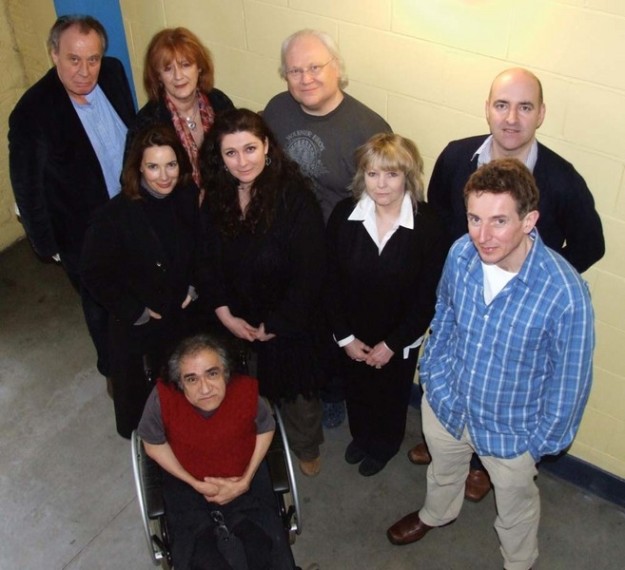 The guest cast also includes Malcolm Rennie as Anzor, the Time Lord bully. Anzor is definitely a character you want to loathe, as he feels self-important and bigoted compared to the Doctor. He disapproves of women as he refuses to let Rana Zandusia have access to his TARDIS and time-travel.

There’s also William Townsend as Vion and Callum Witney Mills as Asam, the two boys the Doctor and Peri meet when they come out of the TARDIS on Magnus. I’m amazed Big Finish got child actors to play two characters in this story. Vion has a very large role to play in this story compared to Asam.

The CD extras are as follows. At the start of Disc 1, there’s a trailer for ‘Leviathan’ with Colin Baker and Nicola Bryant. At the end of Discs 1 and 2, there are behind-the-scenes interviews with the cast and crew including writer Philip Martin, Colin Baker, Nicola Bryant, Nabil Shaban, Nicholas Briggs, Maggie Steed, etc.

‘Mission to Magnus’ is a pretty decent and very visual instalment to listen to from the Lost Season 23 of ‘Doctor Who’. I enjoyed listening to it, especially with Sil, the Ice Warriors, the Doctor and Peri. I also found how light-hearted this was compared to the dark stories that Philip Martin wrote before.

2 thoughts on “‘Mission to Magnus’ (Book/Audio)”