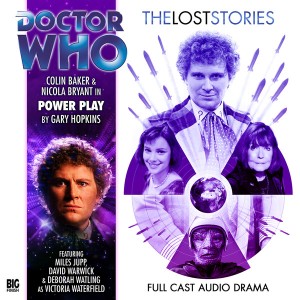 A Reunion For The Sixth Doctor and Peri with Victoria Waterfield

This is a very intriguing ‘Doctor Who’ audio story featuring an older Victoria Waterfield!

‘Power Play’ is the second adventure in a trilogy of ‘Lost Stories’ featuring Colin Baker as the Sixth Doctor and Nicola Bryant as Peri. This story feels extra-special as it also features the return of Deborah Watling as Victoria Waterfield, former companion of Patrick Troughton’s Doctor in the 60s.

I’ve had the CD cover of ‘Power Play’ signed by Colin Baker at the ‘London Comic Con Spring’, March 2019 and by the late Deborah Watling at the ‘Pandorica 2015’ convention in Bristol, September 2015. It’s sad to talk about this story as the CD cover of ‘Power Play’ was one of the last things Debbie Watling signed for me before she died. I’m glad she signed it for me.

It was intriguing to discover that this ‘Doctor Who’ story originally meant for TV was going to feature Victoria’s return in the original Season 23 back in 1986. Sadly that didn’t happen but thankfully Big Finish resurrected this story for audio and Deborah Watling was very happy to reprise her role again. 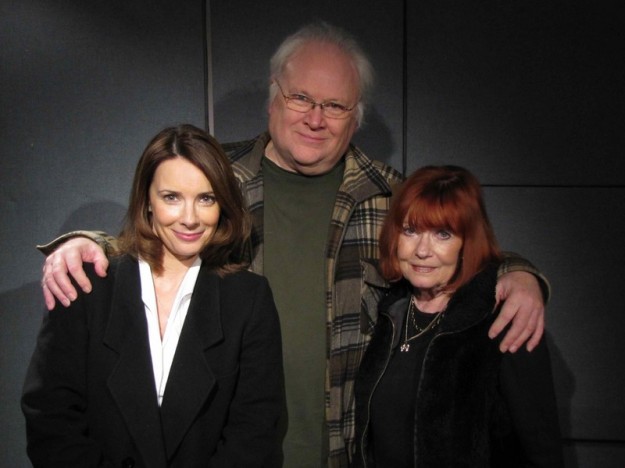 I’ve been lucky to have met Deborah Watling at ‘Doctor Who’ conventions since 2010 and was hoping to write a story of my own featuring an older Victoria following ‘Power Play’ where she reunited with the Sixth Doctor again. Unfortunately I became busy and the prospect never occurred.

Fortunately I did write Victoria as one of the five companions featured in my ‘Doctor Who’ story called ‘The Robots of Lonmar’ along with Nyssa, Billy, Jo and Ace. I hold fond cherished memories of Debbie Watling at conventions and I’m very pleased she was able to play Victoria again for this story.

‘Power Play’ is a four-part story by Gary Hopkins who originally submitted his TV scripts to script editor Eric Saward back in the 1980s. Eric Saward was keen on the story Gary Hopkins proposed, but due to the hiatus and pressure caused by the BBC at that time, the TV tale became shelved for years.

In the story, the Doctor and Peri are being pursued by lizard-like aliens before the TARDIS lands on Earth. A nuclear crisis is happening in the 21st century though as environmental campaigns are being made. One campaigner happens to be Victoria Waterfield who soon gets to reunite with the Doctor.

Oh she’s doing environmental campaigns against nuclear power and pollution which is very good. But we don’t get to spend time on finding out whether Victoria is still married and has had kids as it was told during her ‘Companion Chronicles’. The Doctor doesn’t get to catch up with Victoria either.

I mean this story has been exciting enough and it was lovely to hear the scenes of Colin Baker’s Doctor reuniting with Victoria. But it’s mostly been just that with a rush-rush feel to save the planet. There are not many scenes of character drama between the Doctor, Peri and Victoria as I would like.

I found it unusual to hear an older Victoria’s voice on audio compared to watching her in the TV series. It was quite disturbing when Victoria got mind-controlled and was being ordered to kill the Doctor. I like her scenes with Colin Baker’s Doctor where she gradually begins to recognise him as her Doctor.

Colin Baker is brilliant as the Sixth Doctor in this audio adventure. It was fun to hear how he gets involved with the nuclear disaster crisis that is occurring in the story as well as reunited with Victoria. Colin has worked with Debbie such a long time ago before they did ‘Doctor Who’ together.

I like Colin’s Doctor works things out in this adventure and how he interacts with the campaigners and protesters led by Marion before meeting the heads behind the nuclear power plants including Dysart and Dominic. It becomes tense as the Doctor takes some risky endeavours to save the world.

Nicola Bryant is equally wonderful as Peri in this audio adventure. There are times when Peri can be offhand and make flippant, crude remarks to the Doctor during this adventure. But she clearly shows she truly cares about him, despite being the pain in the backside at times which I found so intriguing.

Peri does get lured into a trap by Dominic when being shown around the nuclear power plant and being captured by him. She almost succumbs to the hypnotic powers of persuasion when she sees a perfect paradise with the Doctor and Victoria back in prehistoric Earth. But she soon breaks out of it.

David Warwick guest stars as Matthew Dysart, the owner of a nuclear power plant in the 21st century on Earth. David Warwick has appeared in ‘Doctor Who’ before as he played Kimus in the story, ‘The Pirate Planet’, with Tom Baker. He has also starred in ‘The Harvest’ with Sylvester McCoy.

Miles Jupp guest stars as Dominic, a seeming colleague and assistant to Mr. Dysart at his nuclear power plant. But as the story progresses, Dominic isn’t as he seems. In fact, he’s not really human. He happens out to be an alien called Dominicus and this assassin who wants to destroy planet Earth.

It’s intriguing how Dominic was revealed as a villain throughout the story and not Dysart as you might expect. Dominic hypnotises Peri and has the ability to utilise time corridor technology in his office. He works with lizard-like aliens to commit genocide and even works for…I won’t reveal her. 😀 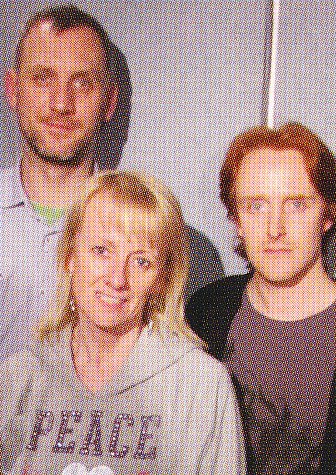 The guest cast also includes Victoria Alcock as Marion Tudor, a nuclear protester. Victoria Alcock played Angela Whittaker in the ‘Doctor Who’ episode, ‘Planet of the Dead’, with David Tennant. It was lovely to hear her in this story and for her to play an active role campaigning against nuclear power.

There’s also Andrew Dickens as Leiss and Howard Gossington as Weska, the two lizard-like aliens called Plerec who are the police wanting to capture the Doctor. And there’s Greg Donaldson as David and James Hayward as Sean, two more nuclear protesters who get involved in the story’s strange events.

‘Power Play’ has been an enjoyable audio adventure with the Sixth Doctor and Peri reuniting with an older Victoria in a story about battling against nuclear power. The final act did feel rushed and complex, but I did enjoy the tension and the drama featured throughout as well as Deborah Watling.

The CD extras are as follows. At the end of Discs 1 and 2, there are behind-the-scenes interviews with the cast and crew, including Colin Baker, Nicola Bryant, Deborah Watling, David Warwick, Miles Jupp, etc. It was very lovely to hear Debbie Watling share her memories of working on ‘Doctor Who’.

There’s a trailer for the next story with the Sixth Doctor and Peri called ‘The First Sontarans’.