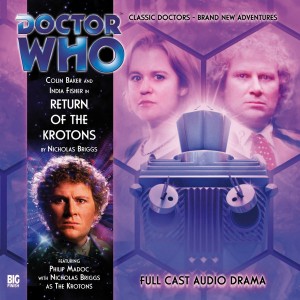 The Doctor and Charley vs. the Krotons

This is a sequel to the 1968-69 TV story ‘The Krotons’ with Patrick Troughton. It is also the 2008 subscriber’s special from Big Finish in ‘Doctor Who’. ‘Return of the Krotons’ features Colin Baker and India Fisher as the Sixth Doctor and Charley Pollard and is written and directed by Nicholas Briggs.

The Doctor and Charley visit Onyakis and they are soon caught in a web of political intrigue. There is opposition against the leadership of Commander Cobden. The Doctor and Charley discover that the Krotons are involved and have to stop them as they start to form and multiply in the Onyakis mines.

I enjoyed hearing this audio adventure with the Krotons. I wondered how Nick Briggs would re-imagine these TV monsters for Big Finish audio and whether it would be exciting or not. The result is very good as ‘Return of the Krotons’ is a decent story to feature these old enemies of the Doctor.

The Krotons were created by Robert Holmes in his first ‘Doctor Who’ story. The Krotons aren’t robots, but crystalline creatures that absorb the brain power of any human into their Dynatrope machine. The original TV story wasn’t inspiring compared to this audio adventure that fares better.

In the original TV story, the setting was the planet of the Gonds. This time we have the story set on a human colony world called Onyakis. The plot’s not too different from the original Krotons TV story but feels pacier and dynamic especially as it’s a 70-minute adventure compared to a four-part story.

India Fisher as Charley was a companion of Paul McGann as the Eighth Doctor and has now met up with Colin Baker as the Sixth Doctor. This was interesting as Charley is travelling with two Doctors in the wrong order from Eight to Six and it is a River Song-like situation being all wibbly-wobbly timey-wimey.

Charley is being careful not to reveal too much about who she is to the Doctor and what adventures they’ve had together since it hasn’t happened for him yet. There is a brief reference to C’rizz at one point in the story and it turns out Charley has similar brain patterns to the Doctor which is intriguing.

Both Colin Baker and India Fisher work well together as the Doctor and Charley in this audio adventure. I enjoyed the friendly banter shared between them in certain scenes of this audio story.

The story guests Phillip Madoc as Commander Cobden in the story. Phillip is a Welsh actor who is well-known as the U-Boat Captain in the ‘Dad’s Army’ episode ‘The Deadly Attachment’. He has also appeared in many ‘Doctor Who’ TV stories that include ‘The War Games’ and ‘The Brain of Morbius’.

Phillip also appeared in the original ‘Krotons’ TV story, but here in this story he plays a completely different character. Cobden is a power obsessed leader – surprise; surprise! He’s intrigued with the teaching machines made by the Krotons which could mean ‘the death of him’ should he use them.

The rest of the guest cast also features Matthew Burgess as Ned Gillespie; Susan Brown (who was in ‘The Stockbridge Trilogy’ on audio and in the ‘Torchwood’ story ‘Children of Earth’ on TV) as Eleanor Harvey; Glynn Sweet as Professor Lyle Woodruff; Ian Brooker as Romilly and Andrew Dickens as Security.

The CD extras are as follows. At the end of this disc, there’s an enjoyable interview with Phillip Madoc, conducted by producer David Richardson. I enjoyed Phillip sharing his memories of ‘Doctor Who’; his memories ‘The Krotons’ and comparing to working on ‘Return of the Krotons’ in Big Finish. 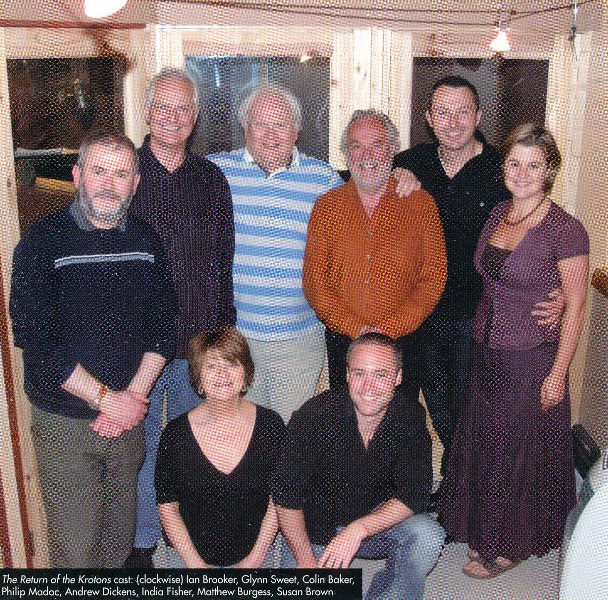 ‘Return of the Krotons’ is a pretty good sequel to the original TV story. I enjoyed Colin Baker and India Fisher as the Doctor and Charley. They seem to work well together as the Doctor-companion team and I hope to hear more of their adventures and how the story arc develops between them.

2 thoughts on “‘Return of the Krotons’ (Audio)”